Although I grew up watching wrestling as a kid, I was closed off to anything outside of my family’s TV subscription. I could watch all things World Wrestling Federation (WWF)/World Wrestling Entertainment (WWE) and at times World Championship Wrestling (WCW), but I knew nothing else.

My experience with wrestling video games was the same; I only knew of various WWF/WWE games and one WCW game (which I mostly liked because of a cheat code that gave everyone big heads). It wouldn’t be until I learned of Fire Pro Wrestling World that I’d discover an incredible wrestling game series that was older than I am.

Fire Pro Wrestling is a series that started in 1989 for TurboGrafx-16. The series would grow with a large number of sequels all the while commonly retaining the series’ defining isometric view and 2D sprites. Subsequent entries would also add on extra modes and mechanics that the series would become known for.

One of the defining mechanics is the grappling system, which is time-based instead of a button-mashing mechanic as most wrestling games use. Another defining feature is the highly detailed create-a-wrestler mode.

Almost every entry in the series has included these mechanics after their introduction to the series and improved on them. In the case of the create-a-wrestler mode, the customization options can encompass other aspects including the ring, referee, and even championship belts.

Among all of the entries in the series, only a handful would be released in the West. A fanbase would follow the series through imports and playing the few official releases, but it didn’t stand a chance against the already popular games based on American wrestling. That isn’t to say the series hasn’t caught a greater audience’s eyes though.

One notable entry was Super Fire Pro Wrestling Special, written by a young Goichi Suda (commonly known now as Suda51). If you’re familiar with his more recent works such as Travis Strikes Again: No More Heroes, you already know his style of dark comedy.

At the time Super Fire Pro Wrestling Special was only his second work and he hadn’t yet transitioned to adding more comedic elements quite yet. Even though it was never translated, the game is infamous for having a plot involving heartbreak, murders, and the player character committing suicide in the end.

Turning to titles known for gameplay reasons, Fire Pro Wrestling Returns for the PlayStation 2 was a hit for the series. Not only was it the series’ first entry in the West that wasn’t a handheld title, but its large roster and improved customization helped set it apart from the competition. For many fans, it was considered the definite Fire Pro Wrestling game.

Not every entry has been well-received though. An obvious example of this was Fire Pro Wrestling on the Xbox 360, which used 3D player avatars as the wrestlers. As a budget title that dropped the common grapple system, isometric view, and lack of options present in previous titles, the game was panned for being too simple and abandoning what fans of the franchise loved.

Five years after the negatively received entry on Xbox 360, and even longer when compared to a proper series entry, Fire Pro Wrestling World was announced in 2017. Along with announcing that the game would be launched worldwide as an early access title on Steam, the game would launch with workshop support which has since led to over 75,000 custom items created by fans.

The game was also going back to its roots and focusing on the mechanics that fans of the series have come to expect from it. This has helped it further deviate and stand out from the popular WWE series of video games. 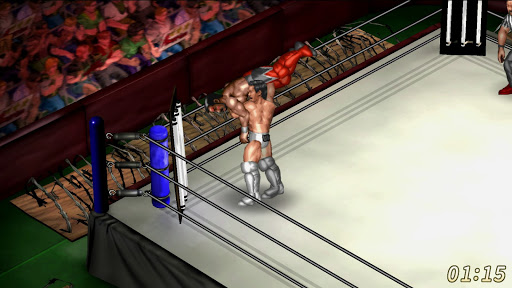 That doesn’t mean that the latter looks bad by any means as the isometric view of the ring and all of the sprites made for capturing different angles of each wrestler are pretty impressive. This becomes even more apparent once you dive into custom wrestlers.

Something that both wrestling game series share is the ability to create your own wrestler. The WWE games are very well known for the amount of freedom given to customizing body proportions, which has resulted in the mode being a popular outlet for some…creative creations.

Fire Pro Wrestling World doesn’t let you create inhuman monstrosities, but it does have an incredibly elaborate array of options allowing you to bring your favorite wrestler, or just about anyone you can think of, to life in the game as a 2D sprite. Accompanying your creations is an equally extensive array of choices when it comes to movesets.

Fire Pro Wrestling World managed to receive positive reviews during its Early Access as well as when it released in December 2017. It has continued to be updated on Steam since its launch, both official and through custom fan content. That isn’t all that was planned for the game either.

The PS4 version of the game was released in August of 2018. Although it doesn’t have access to the mod community that the PC release has built, the PS4 version does have its own separate service called FPW Net which allows for uploading and downloading customer wrestlers. It also had a season pass for sale which bundled three of the eleven DLC’s.

As of now, the game has been updated with everything that was planned from its 2020 road map and is essentially finished in terms of content. The recent highlights include a sequel scenario to the infamous Super Fire Pro Wrestling Special, written by Suda51 himself, as well as a Parts Craft Mode which gives the players developer-level tools in making their own wrestler and moves.

Parts Craft Mode leaves the future of the game in the hands of the community, with future updates focusing on bug fixes. 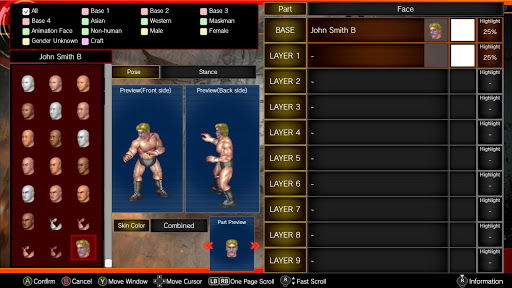 The game isn’t expensive and has a decent amount of content by itself. It has a whole lot more once you consider the community content. On top of all that there’s a variety of DLC options, albeit most at a costly price point.

Personally I can’t recommend this game enough. Although I watched wrestling a lot as a kid and played the games religiously, I fell out of it eventually because it just wasn’t for me anymore (the realization that it’s all acting hits some people harder than others).

I’ve been able to enjoy wrestling again through other media such as the anime Tiger Mask W, but I have no desire to watch the actual thing anymore. And I assumed that meant I didn’t want to play it anymore either.

My problem with the WWE series of games was that it updated and changed controls with each iteration, and it never felt fun to play competitively. Fire Pro Wrestling World instead follows specific game mechanics and features that have only been strengthened with its entries.

It strikes the delicate balance between the competitive and the absurdness that wrestling is portrayed with. You’re not just playing the show out here, but finally letting your imagination run wild.