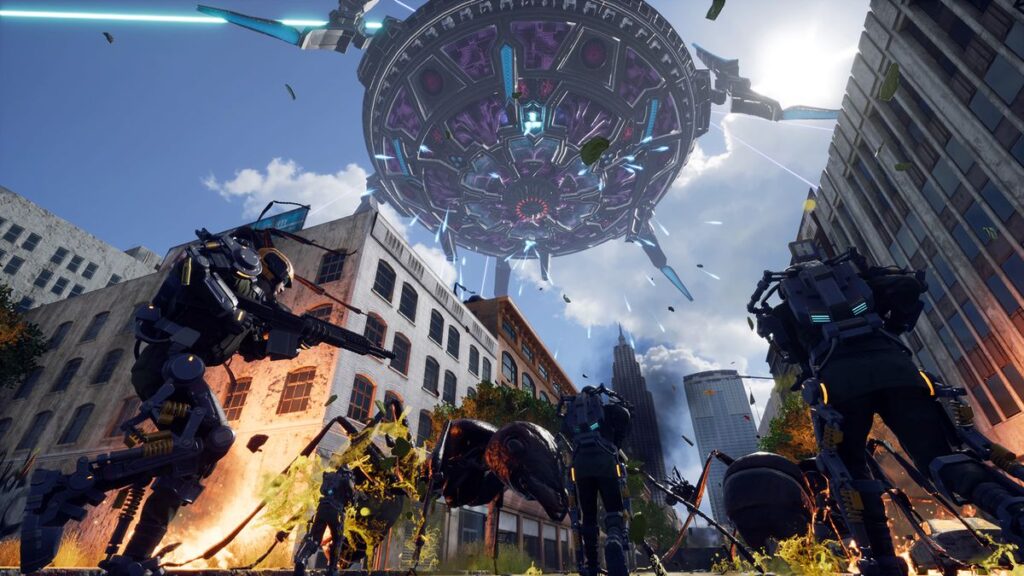 Earth Defense Force Is Not for the Insectophobic

In order to capitalize on the growing popularity of the Sony Playstation, Japanese game publisher D3 Publishing started to produce discs that contained very simple games designed to be sold for budget prices. Initially, these discs contained games like solitaire, mahjong, shogi, even chess and billiards.

These games were listed under D3’s Simple Series, which as its name suggested, was a series of simple games selling for around 1500 to 2000 yen, depending on whether the game was included in the Simple 1500 Series or Simple 2000 series. Generally consumers would know right away, as the number was usually on the box art and part of the title.

Eventually D3 began to run out of basic games for their Simple Series and began experimenting with games that were less-than-simple. Eventually D3 released basic horror/mystery games, basic RPGs, and games based on popular Japanese characters like Kamen Rider, Cyborg 009, and Gundam. As D3 began to experiment with more original ideas, they eventually published a game about defending the Earth from giant insects and robots entitled The Chikyū Bōeigun, or Monster Attack. Eventually it would come to be known as Earth Defense Force.

In the world of the first Earth Defense Force, scientists discover radio waves that prove aliens exist in the far-flung futurescape of 2013, a decade after the game was actually released in 2003. Fearing the aliens could prove hostile, the Earth Defense Force is formed despite many insisting that the aliens won’t be a threat.

The aliens (now known as “Ravagers) very much were a threat, and thousands of ships began to swarm every major city on Earth, seemingly led by a large mothership hovering over Tokyo, Japan.

As the EDF begins to mobilize, giant, acid-spitting insects begin to emerge and lay waste to Earth’s major cities. It’s then the player’s job as a member of the EDF to repel the invading creatures and liberate the planet.

Players use a third-person perspective to control their character in mission-like stages with specific objectives and scenarios. Usually these scenarios are variants of ‘Kill X amount in X time without dying.’

Players can equip two weapons to their character for each mission and have access to automatic rifles, shotguns, explosives, and even laser weapons. Some stages even have vehicles for the player to use, including tanks, helicopters, and hoverbikes. In addition to giant insects, players will also go up against robots, including the alien ships themselves. 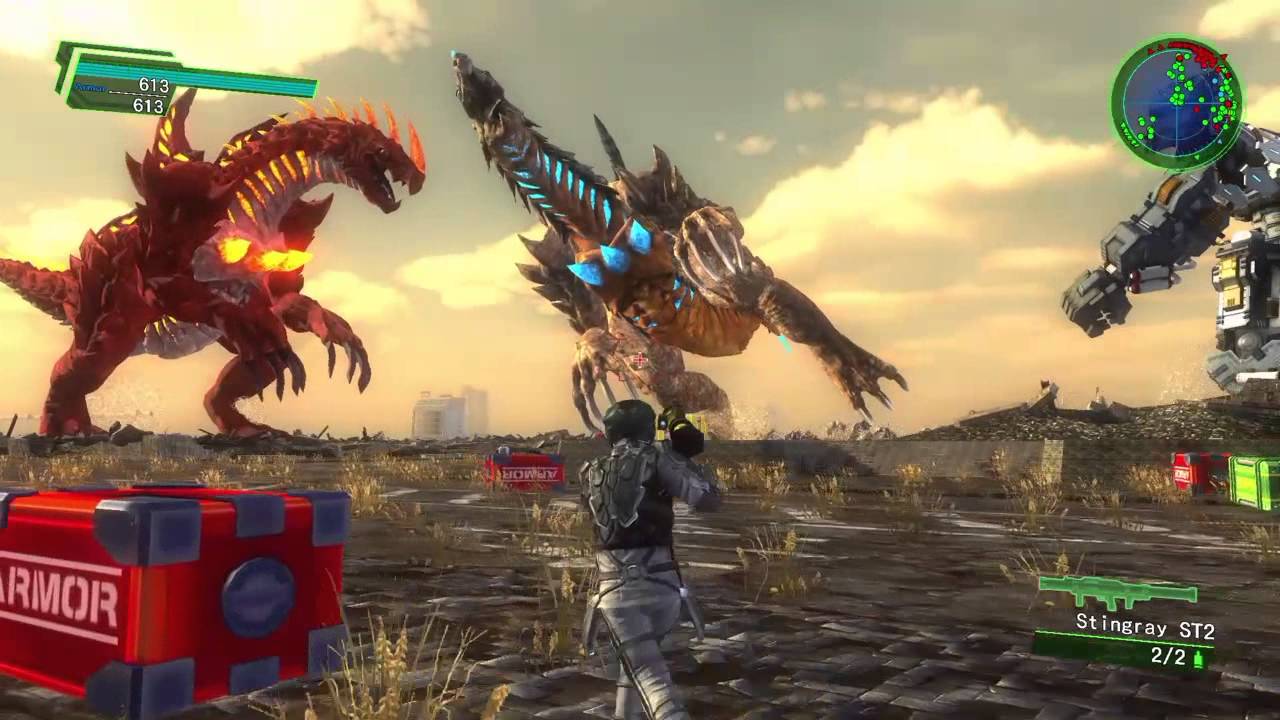 Earth Defense Force Was Big in Japan Before Anywhere Else

The sequel essentially follows the EDF/GDF as they respond to a sighting of aliens in London after supposedly having run them all off the planet two years ago. As it turns out there were aliens living underground since the initial invasion that are beginning to emerge, and it’s up to the soldiers of the EDF/GDF to defeat them once more.

Not much has changed gameplay-wise since the first game, aside from the way weapons are collected and armor upgrades are received. The most prominent update is the introduction of a special class of soldiers known as Palewing Soldiers. This all-female class is equipped with jetpacks, and is more mobile than the typical infantry unit at the cost of their armor capabilities. There’s also the Air Raider class, which has less access to weapons but can call in devastating air strikes from a distance.

The Bugs Come to North America for Earth Defense Force 2017

Earth Defense Force 2017 also received pretty average reviews, with many reviewers noting that while it wasn’t very polished, it was nonetheless fun to play and its focus on arcade-style playability and integration of destructible environments outshone its flaws.

That same year Global Defence Force Tactics was released. Tactics was a turn-based strategy game that put the player in the position of a GDF commander in various battles against the Ravagers. It wasn’t very well received in Japan or Europe, where it was released.

Earth Defense Force didn’t receive another iteration until 2011 with the release of Earth Defense Force: Insect Armageddon. The game is largely regarded as a non-canonical spinoff and takes the perspective of EDF soldiers in America as they try to repel the invaders from the city of New Detroit. It’s essentially the same gameplay style as every other EDF game, but introduces new mechanics such as more character classes and a weapon unlock system.

Insect Armageddon was notable for being the first EDF game developed outside of Japan, and also the first to offer online co-op play. Reviewers began to warm up to EDF around this release, noting that again, it wasn’t very deep but it didn’t really need to be. The co-op mode was good for blowing off steam, but any more than a couple missions and the gameplay began to feel kind of tedious.

The Fan Base Grows with Earth Defense Force 4

After about 12 years of the same gameplay, the same campy missions, and the same overall style, players who may have turned up their noses at the bad dialogue, the erratic physics, and the flaccid plot began to see these not as detractors, but as high points of the game.

So much so that in 2016 D3 released a remastered version for the PS4 and PC titled Earth Defense Force 4.1: Shadow of New Despair. In addition to the remaster, 4.1 contains the DLC packs from Earth Defense Force 4, as well as 20 highly challenging missions for players to complete.

Earth Defense Force 5 was released in 2017 for the PS4 and PC. It was notable for introducing a new variety of enemies to the game as well as having the most missions in any EDF game not including bonus DLC missions.

It was also notable for departing from the general EDF continuity, establishing the EDF as a private military corporation that was finally called into action in 2022. EDF 5 also had tons of DLC support, even offering a Season Pass for players that wanted every bit of DLC whenever it came out.

It was also favorably reviewed by critics, who offered the same criticisms as before but praised the game’s dedication to being nothing but an action game.

Despite the post-release support, D3 released another spin-off, Earth Defense Force Iron Rain. Iron Rain was released in 2019 and developed by Yuke’s, a Japanese developer for a seemingly western audience. Iron Rain attempts to take itself a bit more seriously than games past, which is almost the opposite reason fans enjoy the series.

It was also notably developed with the Unreal 4 engine, which improved the game’s notoriously somewhat lackluster graphics and allowed for character customization. Iron Rain has been received as a solid addition to the franchise among fans, even if most mainstream outlets noted its notorious lack of polish.

Earth Defense Force’s fans are smaller than other games, but very fervent in their support for the series. Even with the recent release of Iron Rain, many fans are wondering when Earth Defense Force 6 will be released, or what plans are going into its development. As of last year, developers couldn’t say yes or no either way, but it doesn’t seem like fans of EDF will run out of bugs to squash soon.