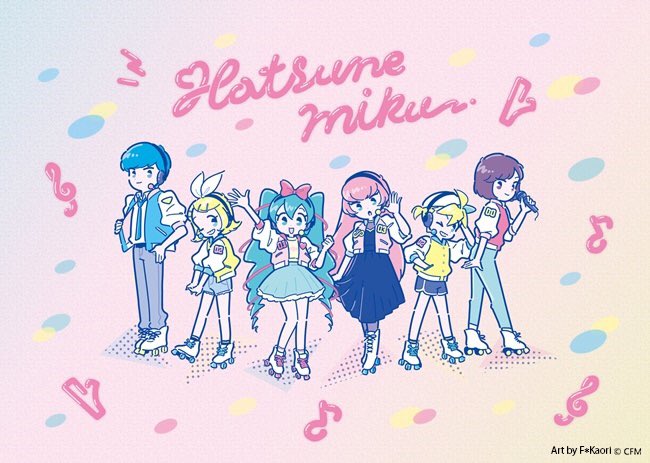 Several awesome artists are helping her celebrate this milestone with creative new illustrations of her and her Vocaloid friends —  including one which envisions Miku as an ‘80s pop idol.

The art by illustrator/ graphic designer F*Kaori has Miku going retro with a big bow in her hair, a letterman-style sukajan jacket, and a totally-’80s short puffy skirt. She’s also wearing old-school roller skates. The artwork is also very pastel, which helps with the whole theme.

Miku officially turns 13 on Aug. 31, the anniversary of when Crypton Future Media released her software.  But this anniversary event won’t start until Sept. 12.

During the anniversary fair, you will receive a Glitter Art Card when you purchase Hatsune Miku-related items from Animate or Movic.

There are six cards, and naturally the cards are random.  So, if you really want the retro ‘80s F*Kaori card, you just have to hope that luck is on your side — or try again, I suppose.

Alternatively, the cute Miku art has also been made into a pouch,  bottle cap-style badge, stickers, and a clear file.

Of course, the Miku illustrations by the other artists are nice, too.

On the Hatsune Miku Official Blog, the next illustration listed after F*Kaori’s art is “Concept Idol” Art by Fukaya. They’re all dressed as doctors and nurses.

The blog didn’t put up much information about the other illustrations by Kogawa and Suzu Yuki.

Animate sells Miku CDs, DVDs, and Blu-ray discs, along with figurines, plushies, and other stuff such as Vocaloid masking tape. Movic’s online store is similar, but without the music.

The Miku anniversary celebration would appear to be limited to the Japanese website, as none of the information shows up on the Animate International website (or else it is well hidden).  The event ends on Oct. 4.

Hatsune Miku was “born” in 2007. She made a live, 3D concert performance at the 2011 Anime Expo in Los Angeles. She has done ads and other promotions for Family Mart since 2012. In 2014, Miku was a guest on the Late Show with David Letterman.  She was also supposed to have performed at the Coachella Valley Music and Arts Festival in April.