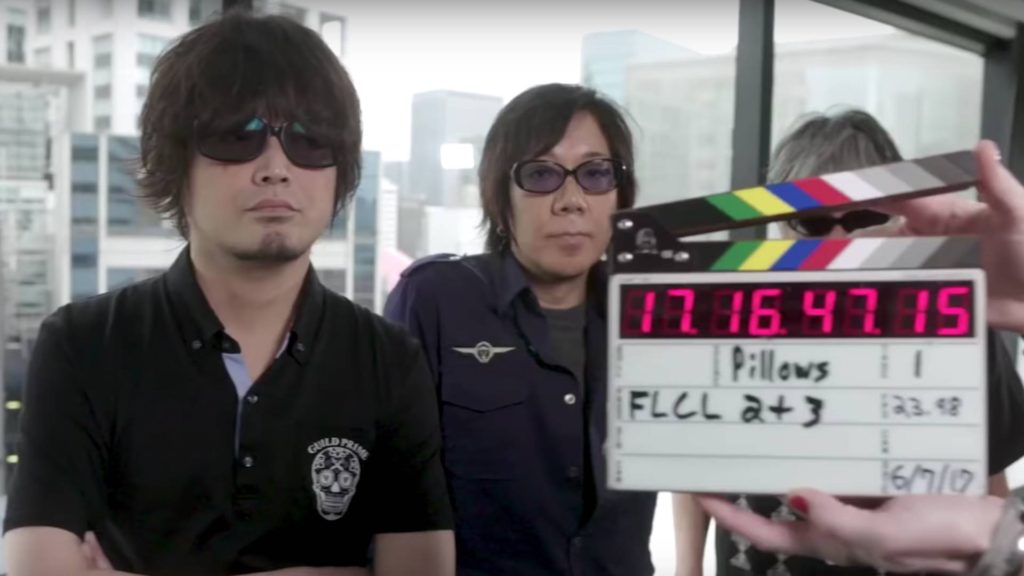 With the premiere of the much-anticipated FLCL Progressive television anime series less than a week away, Adult Swim’s own Toonami has been giving us insider-peeks as to what goes on behind the scenes of one of anime’s biggest names. Prior to this, we were introduced to the series’ production staff and director, but in this latest video, we’re given a special look at the legendary band behind the series’ iconic music, The Pillows.

When talking about the original 2000 FLCL anime series, it’d be near impossible to separate Gainax’s signature anime stylings from The Pillows’ iconic soundtrack. With that being said, there was a chance that pairing could have never happened – as explained by The Pillows vocalist Sawao Yamanaka. During the initial contact with FLCL’s staff, the band showed very little interest in working together with an anime series, especially given their preconceived notions that doing so would bring about strict terms, it’s admitted. With that being said, however, the band sent over a demo of what would eventually become “Ride on Shooting Star,” figuring that if the staff didn’t like that they had no need to work together.

While the rest is certainly history, it’s more than fortunate that The Pillows’ self-admitted rudeness didn’t get the whole project scrapped for them – as they share, it really did change their careers forever. The whole video is a great watch, and I’d definitely recommend it to any fans of either the series or the band. FLCL Progressive is set to premiere on Adult Swim’s Toonami block on June 2nd at Midnight (ET). Further information about the series can be found via its official website.