Now that we’re a year past FLCL 2 and FLCL 3, we can safely say that fans were disappointed. FLCL 2, in particular, was an unfortunate re-approximation of the original that failed to do anything new, nor did it succeed in capturing the first’s charm. On the other hand, FLCL 3 is actually a decent show but by the time it came out many were so off-put by 2 that it didn’t matter. One thing the sequels did get right was tapping the band whose music added so much to FLCL that it wouldn’t be the same without them, the pillows. Now, the FLCL and the pillows connection is touched upon yet again for the limited-edition shirts that commemorate the band’s 30th anniversary. 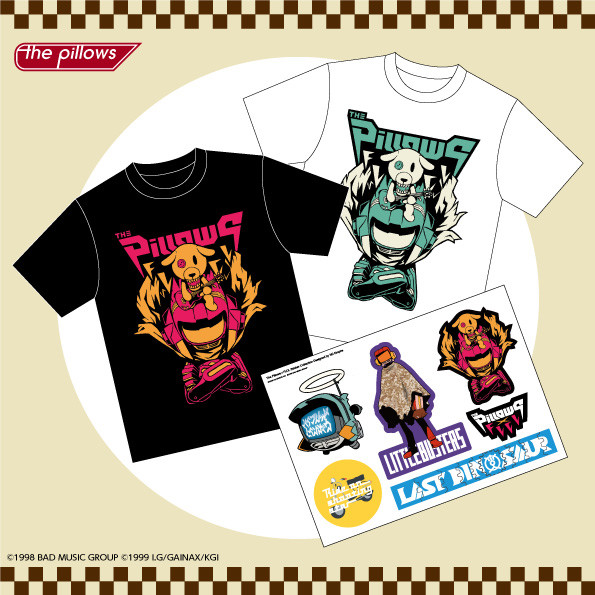 As you can see, there’s only one design for the shirt but it does come in two distinct color swaps. They’re both strong, but I’m maybe a little more partial to the white shirt green Kanti combo here. A sticker sheet is also available as part of the collaboration which also uses to Lord Kanti imagery as well as a few song references used in the show. For whatever it’s worth, ‘Last Dinosaur’ remains my favorite the pillows song to this day. Its iconic opening guitar riff was used many times in the original six-episode OVA.

So, where can you get one of these specific FLCL x the pillows collaborative shirts? You’ll need to be in Tokyo the first week of September or in Osaka in the middle of the month. They’re exclusively being sold at the ‘the pillows’ museum Buster’s dinner’ exhibition that’ll be held inside the Shibuya Tower Records and after at Space ABENO in Osaka’s Tower Records. The exhibition will only be 500 yen but unfortunately, you’ll have to shell out for the shirts.

These FLCL x the pillows shirts will be available in Tower Records in Shibuya and in Osaka during the first week and mid-September respectively.