Every single new tidbit of info we learn about the upcoming Japanese live-action adaptation of The Flowers Of Evil gets me more and more excited. With some notable exceptions like the first Nana movie, Yatterman directed by prolific director Takashi Miike, and the American Speed Racer by The Wachowski Sisters of The Matrix fame, live-action versions of anime and manga tend to be middling at best and Dragon Ball Evolution at worst. However, from the get-go when word got out that Shuzo Oshimi’s cult classic The Flowers Of Evil, still sometimes called by its Japanese name Aku No Hana, would be adapted by the incredible Mari Okada, hopes became high. This newest poster by Oshimi himself continues to raise those hopes. 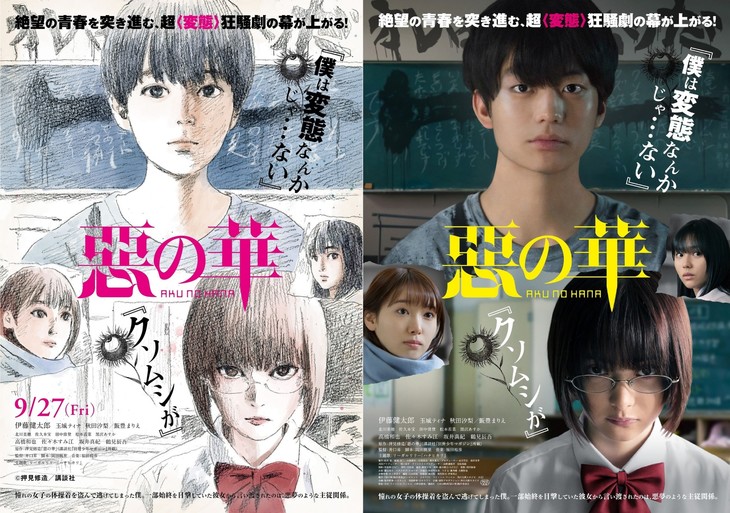 In terms of illustrative ability alone, Shuzo Oshimi has become one of the best in the game in recent years. While his art abilities are a little more prominent in his newer work Happiness than in The Flowers Of Evil, if you do go back to the manga you can see his pen work get better in real-time. What actually put him over the edge was that earlier in his career he was illustrating his manga digitally, which doesn’t make it bad, but halfway through The Flowers Of Evil, he dropped the Wacom tablet for good old pen paper. Each and every page of the second half of that comic, and everything he’s done since features some of the lushest illustrations in all of manga.

Touching upon this The Flowers Of Evil movie poster itself for a second, it’s a trip to see him so successfully take the faces of these actors and imbue them with the essence of his original characters. They, somehow, accurately depict both. It’s not quite manga art but they’re clearly manga characters all the same. Regardless of whether the movie ends up being good or bad, of course the Japanese studio would want to tap the original artist for promo work. However, being the self-proclaimed biggest The Flowers Of Evil fan on the planet, I trust that Oshimi wouldn’t put quality effort like this into something he didn’t believe in.

The Flowers Of Evil film, scripted by the legendary Mari Okada, comes out in Japan September 27.