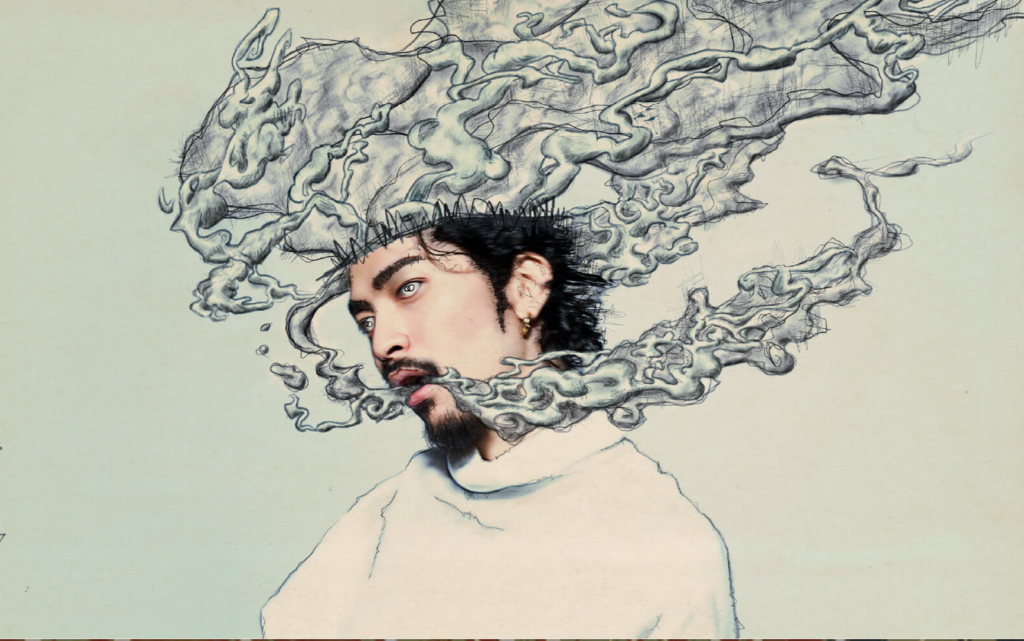 In this feature, OTAQUEST aims to help introduce some of Japan’s best musicians to the world. Today, a left-field pop project merging electronic experimentation with slow-burn funk with scream-along rock, along with a whole bunch of other ideas crammed into one package. It is guided by an emerging songwriter aiming to shift what is possible within J-pop… and succeeding, as this wonky project smuggles ideas that would never normally pass through an industry boardroom into the mainstream. On the occasion of their first full-length album, we dive into one of Japan’s wilder pop groups going.

Daiki Tsuneta isn’t so much the leader of millennium parade as he’s the groundskeeper. ‘My role for this project is to make a playground, so that the people I work with can play around with music and come up with something,’ he told me for The Japan Times last year. It’s a different approach than what he does in the other project he spearheads, King Gnu, a rock group that has blitzed the Japanese music charts over the last few years by providing a different spirit on the country’s preferred genre. There, he works with the same three bandmates, seeing what they can wring out of this lineup.

His more eclectic project, which has existed for almost as long as King Gnu, gathers creators from across Tokyo to let them loose and follow their artistic inclinations. This results in an at-times chaotic mix of music, hitting on dance, rock, funk, jazz, rap and much more. Tsuneta himself describes it as pop art, and he ties it to a similarly surreal visual presentation (which helps it connect with people in an image-first landscape). It’s rarely abrasive, but millennium parade’s music is not something you’d hear in mainstream ecosystem.

Yet it kind of is, in part because of Tsuneta’s emerging status in the entertainment world and also helped by tie-ups. Like a lot of projects launched by successful musicians in the upper levels of pop, millennium parade is a space for Tsuneta and friends to experiment. Unlike other efforts, millennium parade has been able to sneak wonky songs to a greater audience, helping to introduce new sounds, ideas and concepts into the world of J-pop. It’s one of the most intriguing acts going in Japan, both in what they do to music and how they get it to listeners.

They recently put out their debut album, THE MILLENNIUM PARADE, and that felt like a good time to dig deeper into the group’s history.

In much the same way it’s critical to getting where King Gnu comes from, understanding millennium parade requires grappling with Srv.Vinci. This was Tsuneta’s first project after relocating to Tokyo from his home prefecture of Nagano, and it found him dipping into a little of everything, including LA-inspired beat production to avant garde rap to chipmunked rock. It was millennium parade in utero, Tsuneta following whatever impulses he had. It’s also a little rougher than what was to come from either of his go-to outfits, very much a creator trying a lot of different styles out and seeing what sticks. Still, as an entrypoint, it’s a fun detour and one offering plenty of sneak peaks of what was to come.

By the midpoint of the 2010s, Tsuneta split his artistic sides up into two. To navigate the traditional roads of J-pop, he used King Gnu as a way to emphasize lyrics and melody. For what could be read as more oddball, he created Daiki Tsuneta Millennium Parade, a sonic space where he could spend more time tinkering with beats and the actual detail of sound. It also allowed him to team up with a rotating cast of artists, allowing for the creation of dizzying hip-hop numbers delivered in French (above) to whirring spoken-word pieces. This is also the point where his interest in smashing top-level visuals with his music (done through his design studio Perimetron) really takes off.

This undertaking remained largely niche for the next few years. King Gnu got the bulk of Tsuneta’s focus, which explains how that band shot up so quickly from festival side-stage act to nationally broadcast TV shows, while his Millennium Parade put out one album. But these early efforts helped set millennium parade up for something bigger.

The newly renamed millennium parade (all lowercase, no Tsuneta in the moniker) re-emerged onto Japanese music radar by releasing a steady stream of singles complete with often unsettling visuals, starting with the number ‘Veil.’ While many of the core sounds of millennium parade remained intact from earlier years (electronic music formed a base over which Tsuneta could get imaginative) one of the more pronounced changes was how much more active guests were, ranging from regulars like vocalist Ermhoi and members of the left-field jazz-pop band WONK to special appearances from famous J-pop acts like Chara.

Songs put out from this project attracted viral buzz, often making large splashes on social media thanks to their attention-grabbing videos and mutating sounds. This led to larger collaborations, like getting the chance to create a millennium parade highlight in ‘Fly With Me,’ which served as the theme song to Netflix’s Ghost In The Shell: SAC_2045 Committee theme. More on that down below, but it was a commercial and critical high.

Now comes THE MILLENNIUM PARADE, the outfit’s first proper album, and an early 2021 highlight. Part of its appeal lies in how it acts as a time capsule, gathering some of their breakthrough numbers into one place while supplementing them with new cuts such as the skeletal skip of ‘Trepanation’ or the slow-burn dramatics of ‘FAMILIA’ (above), featuring an appearance from King Gnu vocalist Satoru Iguchi. It’s adventurous but not alienating, and offers a well-rounded look into Tsuneta’s stranger side.

Good move: make your first big statement as unsettling as possible. ‘Veil’ shines in part because of the ever-shifting electronics and beats, but really stands out because of frequent collaborator emoji’s vocal trapeze work. It might still be the best vocal included on a millennium parade cut.

Tsuneta constructs some wonderfully disjointed funk for guest vocalist Chara to wow over, the pair making for a surprisingly potent musical force.

Bond-worthy horn blasts, rap-rock interludes and a video begging for a 10-episode streaming deal: this one is still an unlikely pop hit, but it’s also millennium parade at full swagger, partially explaining why it is their biggest number to date.

Busy but always locked in, this song captures millennium at their most teetering-on-chaos-but-keeping-it-together best.

A theme running through all these choices: a great ear for vocals. This, an album cut from their debut, puts the spotlight on rising artist Friday Night Plans, and gives her a dramatic backdrop to show her skills (while coating her in a slight electronic glow).