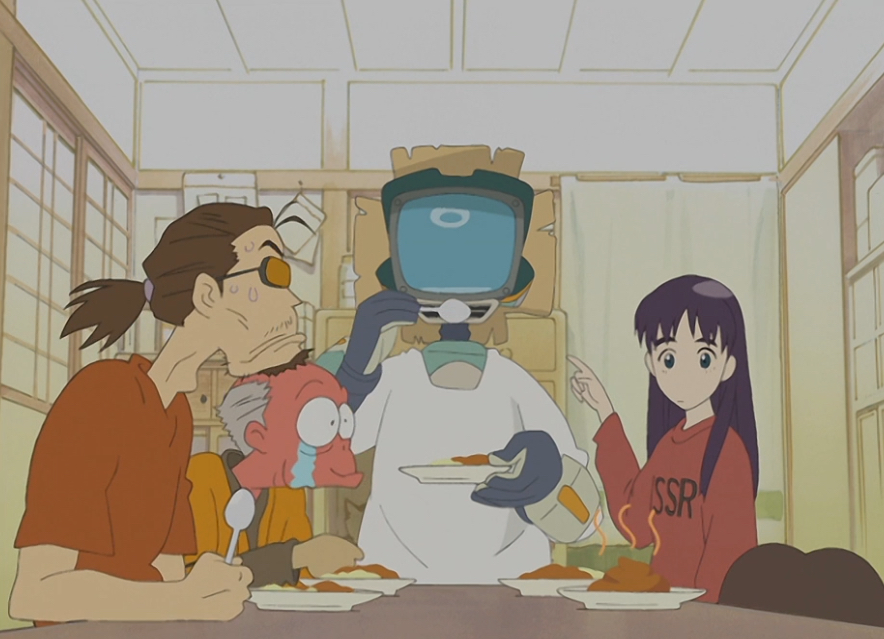 A short while ago, I wrote an article on Japanese food culture, regional dishes, and how these things are celebrated in anime.

As I wrote it up, I knew that I had hit upon a good topic; perhaps too good! Any writers worth their salt will find an endless buffet of food topics in anime, and soon my plate was overflowing with ideas.

In my first article, we tasted okonomiyaki, sata andagi, Nagoya-style miso, yakiniku, and ramen (including Naruto’s obsession with it). And that still wasn’t enough.

Let’s go back for a second helping.

I first ran across squid ink spaghetti at a Japanese-Italian pasta restaurant in Los Angeles. It seemed like such a Japanese idea (combining noodles with an unusual type of seafood) that I naturally assumed that it was.

However, squid ink spaghetti was actually invented in Italy. It seems that both Sicilians and Venetians (both coastal regions with a lot of seafood) can lay claim to it. Italians call it spaghetti al nero di seppia. Japan only learned about it in the 1970s.

In the first episode of Ika Musume, they find out that Squid Girl’s ink is delicious, even if it looks disgusting coming out of her mouth.

Curry is a Japanese dish of mixed heritage. That unique spice blend started out in India. During the colonial era, the British acquired a taste for spicy Indian cooking. They brought curry to Great Britain and adapted it (i.e., made it milder).

At some point during Japan’s Meiji era, the British introduced curry to Japan. The Japanese adapted it further. They poured curry sauce over tonkatsu; replaced the rice with spaghetti; added curry flavor to ramen and udon; and so on.

The passage of time and changes to the recipe have made curry seem as Japanese as ramen. Like ramen, curry is relatively cheap, so it shows up on cafeteria menus a lot.

Curry in anime often plays a role similar to chili in U.S. shows: too spicy for some, or a challenge for others.

For example, a Naruto episode in the middle of the series’ long parade of (mostly horrid) fillers featured the ridiculously spicy ‘curry of life.’ This dish cured some dying characters, but knocked out others.

At the end of the Alabasta arc of One Piece, there’s a filler episode about curry. A young Marine chef needs Sanji’s help to prepare a special curry.

The K-On! girls wrote an ode to curry, Curry Nochi Rice. It doesn’t appear in any episode, but was created for an album. Translated into English, the song includes weird, but potentially metaphorical lyrics, such as ‘A piping hot plate of curry/ motivate me with a single spoon of spice/ I don’t want mild, I want medium spice today/ it’s an adult’s flavor.’

In FLCL, curry is probably a metaphor for… something. Naota doesn’t like spicy food. Haruko insists that it’s ‘Little Prince in New York’ curry, parodying S&B’s extremely mild brand of curry for kids. Nimamori, who’s visiting Naota, seems to have gotten all the mild curry. Later in that same episode, curry will help them defeat a monster robot.

Meanwhile, in real life, there have been CoCo Ichibanya collaborations with Gundam and Evangelion. In fact, Evangelion has done curry a number of times.

A (Not) Curry Side Note

By the way, not all super-spicy food found in anime or manga is curry. If that plate of spicy sauce with rice has pieces of tofu in it, it’s probably mabo dofu. ‘Mabo dofu’ is the Japanese pronunciation of the Sichuan Chinese dish mapo tofu.

Japanese sweets come in dozens of varieties, both native and introduced. You shouldn’t fill up on them, so we’ll look at just a few.

Anko Mitarashi in Naruto is named after two main ingredients in the dumplings known as dango (specifically, anko dango and mitarashi dango). Naturally, she likes to eat these sweet little balls of mochi rice.

Dango are also the mascots of Clannad. The very sweet ending song ‘Dango Daikazoku’ is dedicated to the dango family. Incidentally, Clannad isn’t the Key anime/visual novel where a cute girl steals taiyaki from a street vendor. That’s Kanon.

When you get right down to it, taiyaki isn’t all that different from a waffle. It uses the same sort of batter, and the cooking method is similar. It’s the fish shape which really makes it distinctively Japanese. The anko filling also helps give it a distinct Japanese flavor.

I’ve been told that taiyaki and imagawayaki are not actually the same thing. However, I’m not entirely clear on the reasons why. The biggest difference seems to be that taiyaki is fish-shaped, while imagawayaki is round. Because of this, you’ll more frequently notice anime characters eating taiyaki.

Except for Doraemon, of course. He prefers the pancake-like dorayaki over either one of those two.

Either way, they all taste good.