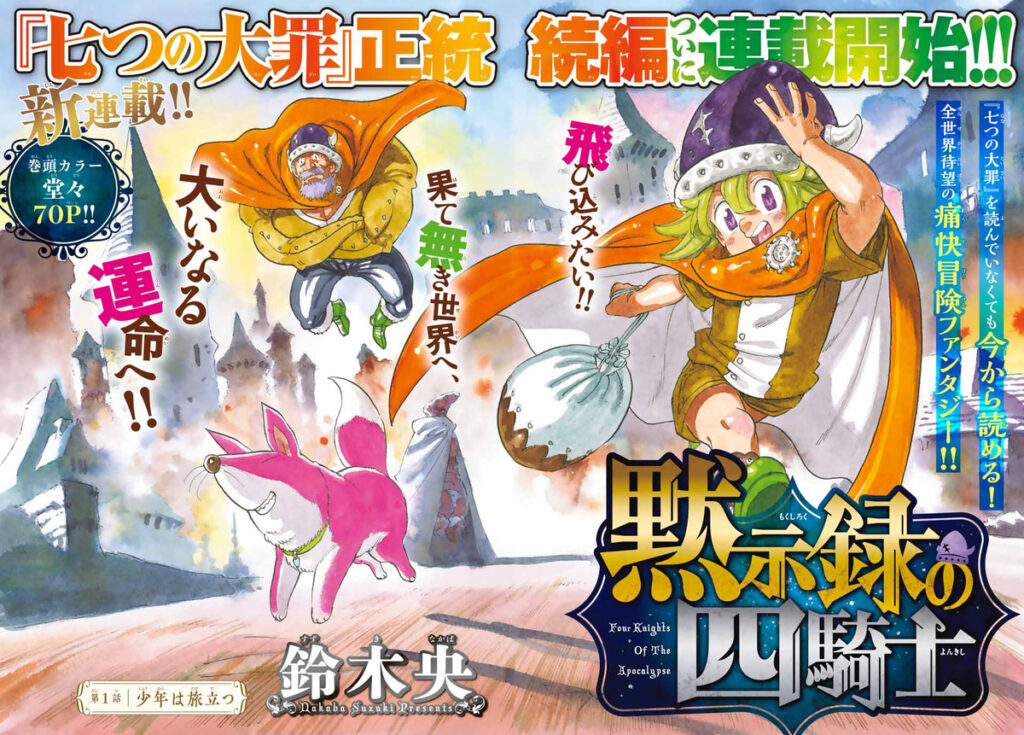 The long-awaited Seven Deadly Sins (Nanatsu no Taizai) sequel Four Horsemen of the Apocalypse (Mokushiroku no Yon Kishi) has begun today in the latest issue of Weekly Shonen Magazine, penned once again by series author Nakaba Suzuki. Although it is described as a ‘legitimate continuation,’ it does beg the question whether it can keep up the franchise’s overall momentum, or if it will ultimately prove unnecessary.

Ever since the launch of Boruto: Naruto Next Generations in 2016, continuations of long-running shonen manga have been met with a certain amount of distrust. Arguably, there have been such sequels before, but Boruto brought the problems of continuing a completed story to the fore: disrespecting the memories and legacies of the old characters, even if done with the best intentions.

To a certain extent, this sequel appears to be a lot better positioned to follow up on The Seven Deadly Sins, as it is being written by its original author. Although Masashi Kishimoto was heavily involved in the conception and production of Boruto before taking over writing duties completely back in November, the ultimate beat-by-beat storytelling fell to author Ukyou Kodachi: the unfortunate consequences of this might be avoided by having Nakaba Suzuki steer Four Horsemen of the Apocalypse from the very beginning.

On a conceptual level, Four Horsemen of the Apocalypse initially sounded very much like Boruto. When it was announced back in March 2020, it was described as ‘the story of the next generation’ and said to focus on previous protagonist Meliodas’ son, Tristan.

Yet, since then, the focus has apparently shifted to a new character named Percival, who is featured in the above PV. In fact, Tristan is nowhere to be found, suggesting that Nakaba may have changed his mind about focusing on a character so close to the old cast: that might be a good thing, honestly.

The Seven Deadly Sins never took off overseas in the same way as Naruto did, but remains incredibly popular in Japan. It continues to spawn a mountain of merchandise and anime adaptations, including a new, original film set to premiere this summer. Undoubtedly, many eyes will be on Four Horsemen of the Apocalypse to see if it can capture that same magic. Let’s just hope that it learns the lessons of the past.

Four Horsemen of the Apocalypse is serialized in Weekly Shonen Magazine.