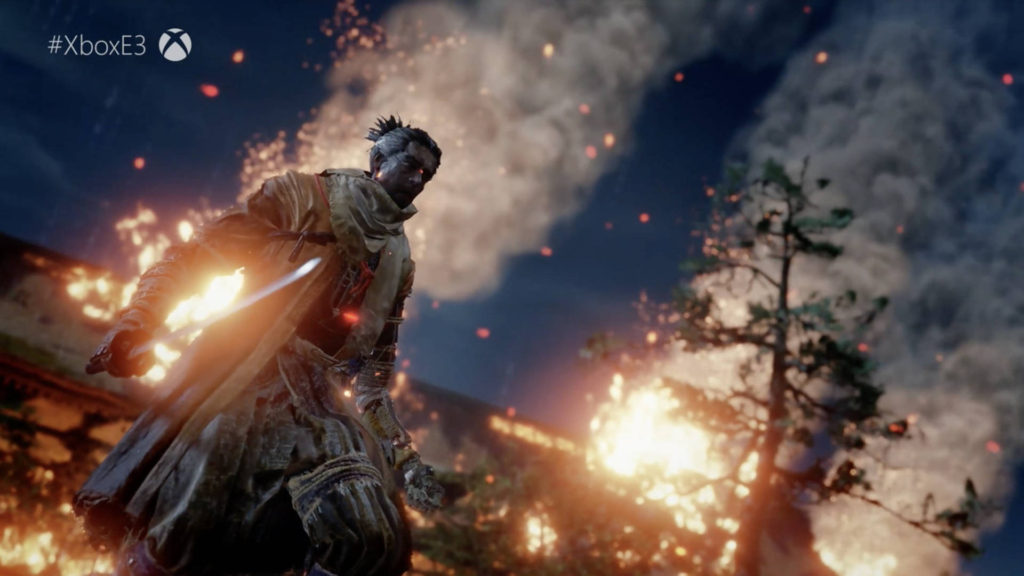 The remake Metal Wolf Chaos XD wasn’t the only thing that legendary Souls developer From Software had to show at this year’s E3 – not only was a new VR game from the studio revealed, but the Microsoft conference saw the long-awaited reveal of the studio’s new original IP with a trailer that revealed the game’s name, setting, some basic gameplay and some story details. Check it out below:

takes place in the Warring States era of Japan and features yet another scorned protagonist – this time named ‘Sekiro,’ whose name means ‘the wolf torn in half,’ alluding to both his artificial arm and his tragic backstory; torn away from his young master by his archenemy, he must go on a quest to reclaim his ‘other half,’ slaying plenty of baddies on the way.

How he’ll achieve that goal seems rather different from other entries in FromSoftware’s library, however, as Sekiro will use his artificial arm not only to deploy some unique weapons but also as a grappling hook – adding an element of verticality to the studio’s games that hasn’t been explored before. Furthermore, the lack of shields and dashing in the trailer seem to suggest that, unlike Dark Souls and Bloodborne, Sekiro will be focused more on swordplay, most likely rendering parrying and countering even more essential than ever before.

The game is slated to release in 2019, and considering that most games from the studio have been released around March, it’s safe to assume that it’ll be in the first half of 2019 at least. As usual, From Software and director Miyazaki have stayed light on details so far, so all that remains is to wait patiently for more information as best we can.

Another rumor finally proven true is that FromSoftware is working on a PlayStation VR game, which was revealed in the after-show of Sony’s E3 conference. While it does seem a bit of a disservice to relegate such a beloved studio’s game to after the main conference, a trailer did help with our curiosity:

Titled Déraciné and available exclusively for PlayStation VR, you play as a ghost who inhabits a school. Through player interaction, puzzles and a ‘mysterious story,’ you will have to prove your existence to the children who do not believe in you. It looks to be completely different from the studio’s past work since it seems to be in the first person as well as not having a focus on combat.

Even so, no doubt there is more than meets the eye with this title, as FromSoftware never simply develops a genre game, always taking a unique direction – I mean, who expected Bloodborne to really be about Lovecraftian horror? Speaking of Bloodborne, the studio’s last PlayStation-exclusive title, looking on the website reveals that Déraciné will be developed using the same engine as Bloodborne, meaning that all of the great technology developed to make Bloodborne as great as it was thankfully won’t be going to waste after all.

Déraciné will release in 2018, so looks like we won’t have to wait long before we can uncover what this game is really about. That being said, the real star of the show here definitely has to be Sekiro: Shadows Die Twice, which looks to be pushing forward the Souls formula in new, exciting ways with its new combat style and vertical level design. Of course, let’s not forget the remake of the glorious cult classic Metal Wolf Chaos announced during the Devolver Digital conference as well. This year From Software definitely put forward a strong showing, and there’s still plenty more to come from this year’s conferences.