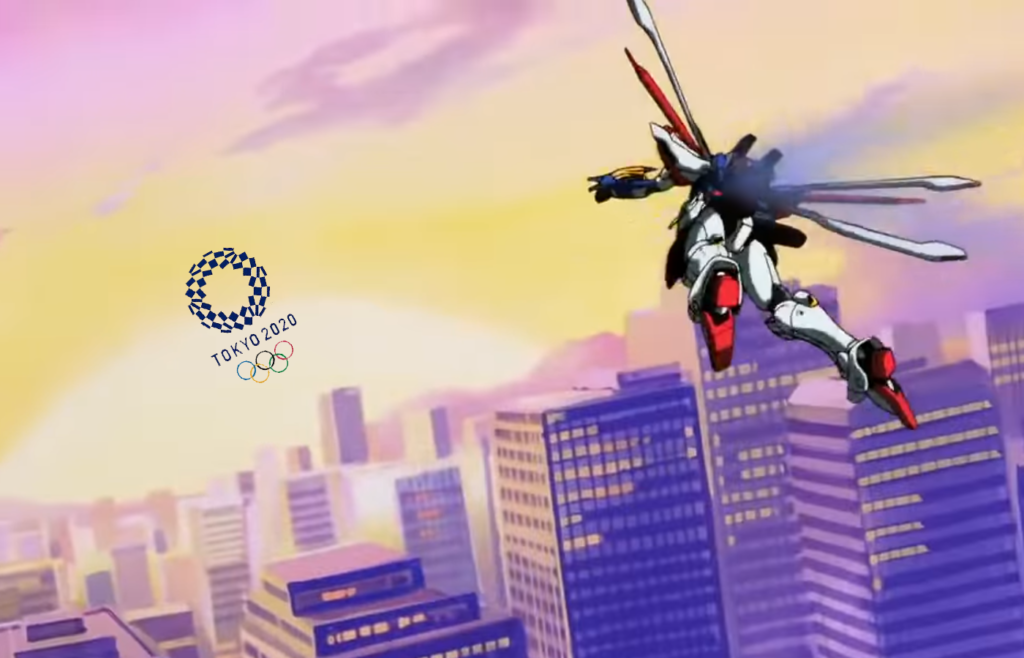 While there’s no denying it was a necessary safety measure, spirits have been pretty low since the official postponement of the 2020 Tokyo Olympics. Tokyo and its denizens have been preparing for the once in every four years event for a long time now and seeing all that hard work and anticipation get flattened stings, even though we understand why. As the Novel Corona Virus continues to spread throughout the world, we’ve heard about one cancellation after another over here in Japan but now that the Olympics have been pushed to 2021 the reality of the situation has begun to set in over here. Tokyo’s not in full lockdown yet but more and more people are working from home and staying in as much as possible, and while we don’t want to make jokes about a serious situation staying in does mean more time to watch your cartoons and play Animal Crossing. If you were looking forward to watching the Olympics this summer and have found yourself with a whole bunch of time on your hands, we have something that might help on both fronts; Mobile Fighter G Gundam.

If you or no one you knew caught  G Gundam during its Toonami run, it’s probably that you have no idea what you’re missing. Amongst Gundam fans, it’s rarely the first show someone lists as their favorite or for newcomers to the franchise to and there’s a couple of understandable reasons for that. For starters, the 1994 series was the first Gundam show to take place outside of the Universal Century timeline. That means you’ll have some purists writing it off from the get-go and it’s quite different even among all the other Alternate Universe Gundam anime.  It stands out amongst the rest of the AU Gundams, an umbrella term for shows like Mobile Suit Gundam Wing and Iron-Blooded War Orphans that don’t take place in the continuity established from the very first series, being the series farthest away from the franchise’s core tenents of war stories and tactical combat. Not that we don’t love our classic Gundam stories but G Gundam offers a completely different Gundam experience in every front.

Now on some level, I’m writing this article to tell you to use some of your quarantine downtime to watch Mobile Fighter G Gundam because I’m sure you’ll enjoy but it really does make for a decent Olympics substitute. The set up for this particular Gundam show has nation-states, instead of going to war with one another to solve their disputes, take place in international competitions where each country sends in their best fighter in their best Gundam to duke it out for the top stop. Just like the Olympics, these Gundam battles are held every four years although unlike the now canceled ceremonies the country who wins the simply titled ‘Gundam Fight Tournament’ controls the earth for the next four years. Sure would be a problem if that’s how the world worked in real life and the Olympics got canceled but instead you can sit back and enjoy this worldwide competition. 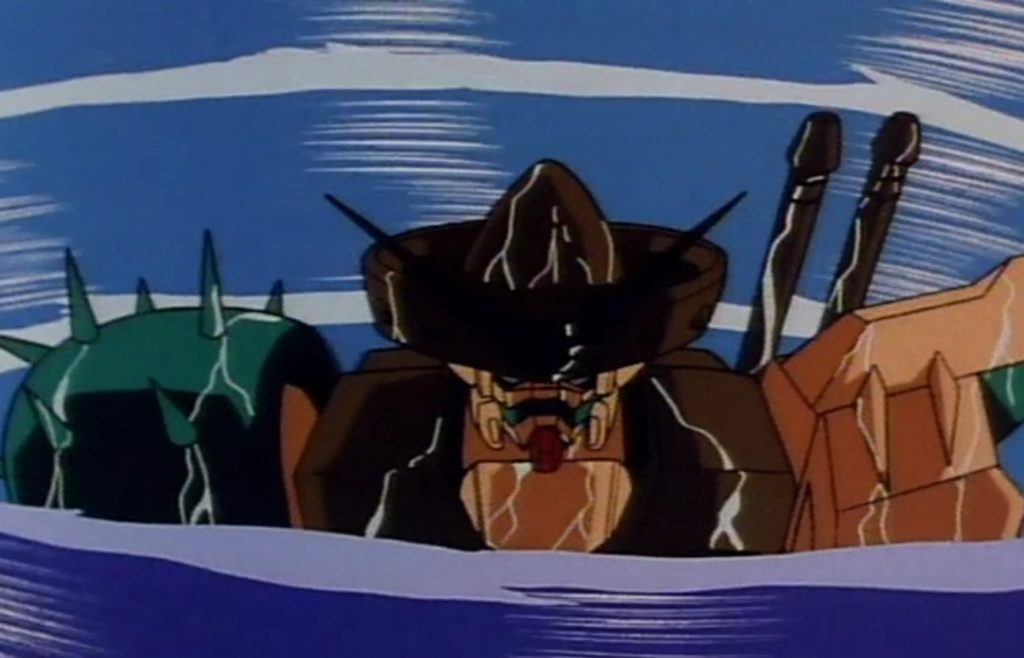 G Gundam really hams up the international angle too, with each countries’ representative and their Gundams incorporating signature elements of the places they come from. For instance, Neo Canada’s fighter Andrew Graham looks straight up like he lives in a log cabin and he pilots ‘Lumber Gundam’ which uses oversized axes for weapons. America’s ‘Gundam Maxter’, piloted by an exaggerated man named ‘Chibodee Crocket’, looks like a cyborg (American) football player. Some examples might be considered borderline offensive by today’s standards, like Mexico’s too on the nose Tequila Gundam pictured above which wears a huge sombrero, but these portrayals weren’t intended with any harm. Besides not even that is as bad as Denmark’s Mermaid Gundam, basically just a giant robot in a fish suit.

The show’s culturally inspired Gundams and pilots full of personality aren’t the only thing that’s over the top about it. How these competitors duke it out also vastly differs from the majority of mech combat in the Gundam franchise, really coming off much closer in feeling to Olympic competition than the typical wartime strategical fighting most Gundam anime opt for does. These comedically themed mechs are punching each other, kicking each other, really whacking each other upside the head and engaging in some Greco Roman wrestling type shenanigans. You got some weapons in there, even some occasional shots fired, but it’s all one shonen style one on one fights that’ll have you cheering in your seats. After watching G Gundam, you’ll think all robots should fighting this way even when the fate of the world is at stake. Granted this is a Japanese show and the main character Domon Kashu pilots for Neo Japan so, without giving major spoilers, your best bet is to root for him.

If it wasn’t abundantly clear to you by now, another reason Mobile Fighter G Gundam makes for a good quarantine watch is that it’s equal amounts silly and charismatic making it a ton of fun from start to finish. Other Mobile Suit Gundam shows will make you deal with the realities of war and suffering which are probably two of the last thing you want to think about when cooped up due to global pandemic. Despite being nearly 30 years old G Gundam remains extremely watchable and entirely likable. Taking influence from the Super Robot shows of old like Mazinger and infusing it with the fiery of classic sports anime, Gundam’s first foray into something else remains something else till this day; The type of show that will separate you from your concerns for a brief, wonderful, and necessary moment. 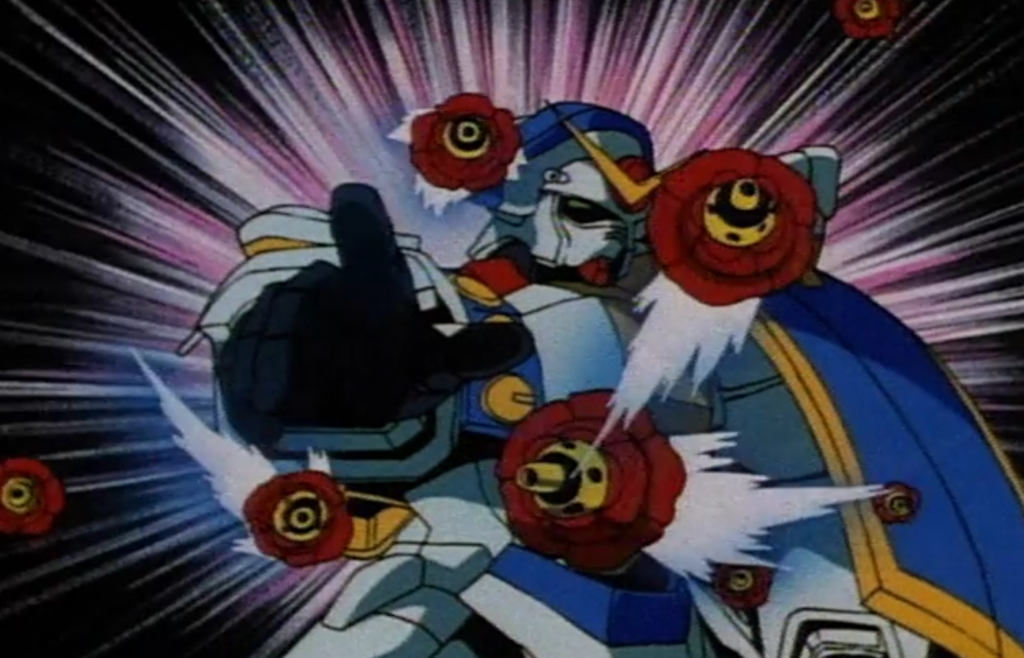 Despite remaining a controversial pick among capital G Gundam fans, Mobile Fighter G Gundam will win your heart over in the same way Gurren Lagann once did. With the Olympics postponed a whole darn year and most of you reading this cooped up in your rooms, we can’t think of a more inspired substitute for the 2020 Tokyo Olympic Games than this cavalcade of cartoony mechs and their spirited pilots. You have Gundams in magical girl outfits, noble Frenchmen straight out of Rose Of Versailles, not to mention the glorious Master Asia, and that’s all only the tip of this wacky races looking iceberg. We promise you don’t have to be an established Gundam fan, or be into mech shows at all for that, matter to enjoy this spirited classic. Drop your preconceived notions, stay inside where it’s safe, and buckle up for one of the wildest and zaniest rides anime has to offer.

You can binge-watch all of Mobile Fighter G Gundam from the comforts of your Crunchyroll account. If you’ve already seen it and want something else like it, try out the newest Gundam Build Divers.