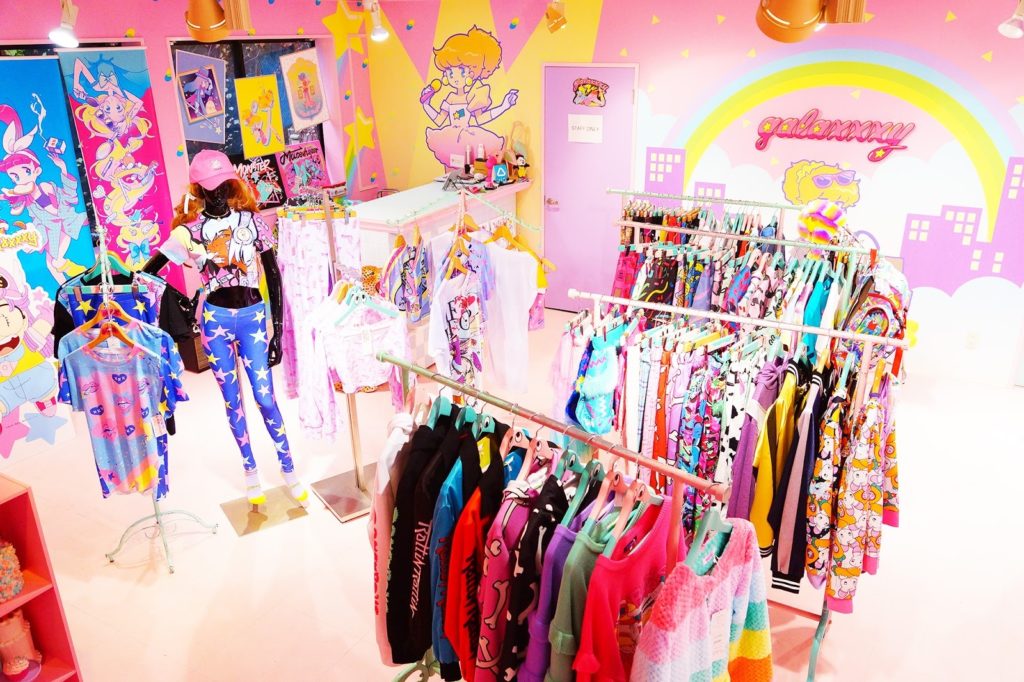 When westerners hear the word ‘Tokyo,’ some of the first things to come to mind are neon lights, Tokyo Tower and extreme fashion trends.

Japan’s capital city offers some of the most unique street styles in the world, with the famed Harajuku neighborhood being the epicenter of this everlasting youth movement.

Even in 2020, countless boutiques in the area can be found selling out-of-this-world clothing to fearless fashionistas. galaxxxy is the perfect example, a shop filled to the brim with brain-altering colors and patterns with plenty of celebrity collaboration and manga influence.

Ultra-bright and In Your Face: galaxxxy is the Ultimate Harajuku Clothing Store 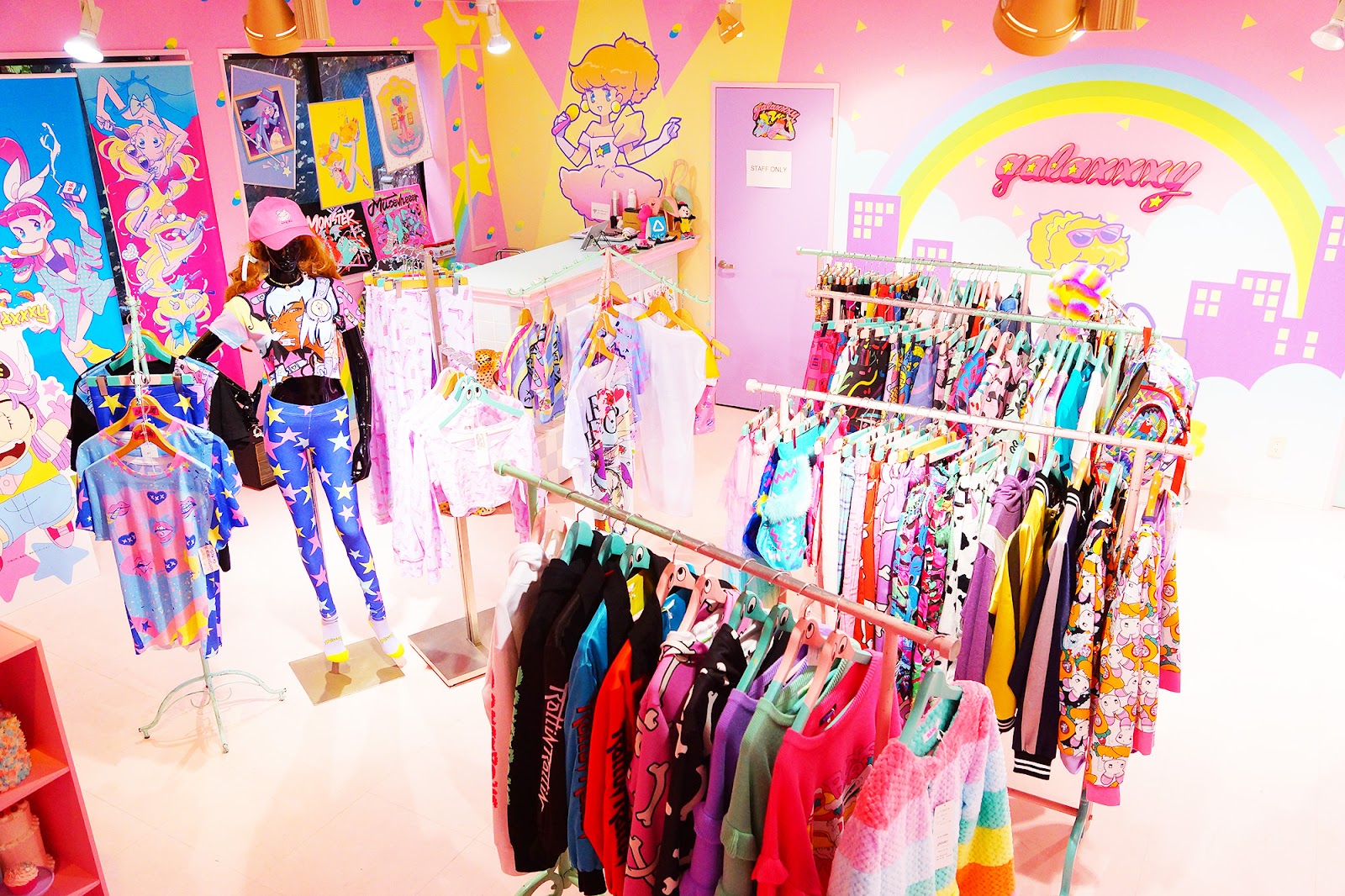 The year was 2007. The year before I graduated from high school, the extreme fashion trends in the west included low-rise jeans, popped collars and baggy sweatpants with writing on the butt. At the same time halfway across the globe, galaxxxy was opening its doors in Harajuku, introducing colorful one-of-a-kind styles reminiscent of a Lisa-Frank trapper keeper. There are no limits to the brand, with offerings from funny T-shirts and patterned leggings to manga-themed sweaters and band merch.

The first galaxxxy store, located on the famed Dogenzaka street in Shibuya closed its doors in 2017, but the current location, the “galaxxxy in HI-FI shop,” is only a five-minute walk from the famed 109 building. While plenty of fashion-conscious men and women frequent Shibuya for mainstream clothing, those more Akiba-minded flock to galaxxxy for their anime and manga themed fashion. In the past, the brand has partnered with a number of popular titles, from Sailor Moon and Dragon Ball to One Piece and Dr. Slump.

galaxxxy was the brainchild of Hiromi Kishi, who has now left the brand to work as an independent designer (while running an equally eclectic and artsy Instagram page.)

In recent years, the clothing brand has branched out, opening a short-lived Harajuku-based cafe in 2013, aptly named the galaxxxy cafe, and holding auditions for its own idol group in 2019.

The four-member group Aidoloxxxy, a collaboration between galaxxxy and “B”ORDERLESS MUSIC PRODUCTION, has released two music videos for their venture thus far, titled “Galaxy Quest” and “Senkou Clarity,” both showing off plenty of signature clothing mixed with rock-infused idol choreography.

Every Harajuku brand stems from one guiding principle: to break free of the status-quo and find a voice independent of a school uniform or suit and tie. While this mindset is indicative of the often strict rules of Japanese culture, Harajuku fashion has begun to find footing outside of the island nation, and galaxxxy is no different. The demand for these wild pieces has flooded the internet, in more recent years due to a number of extremely popular celebrity collaborations.

Vine wasn’t just a place to find fresh memes, though it seems like it in retrospect.

In 2015, popular synth-pop artist and Japanese pop-culture fan Porter Robinson discovered the galaxxxy clothing brand and took it upon himself to visit the Shibuya location, filming a clip that quickly made its way to the higher-ups.

The musician’s debut album “Worlds” was the center of the collaboration, the three-piece spread consisting of a hat, T-shirt and very sought after sweatshirt, today going for big bucks on bidding sites. All of this seems a fitting prologue to Robinson’s connection with Japan, with 2016 bringing the world “Shelter,” his collaboration with French DJ Madeon and anime studio A-1 Pictures. 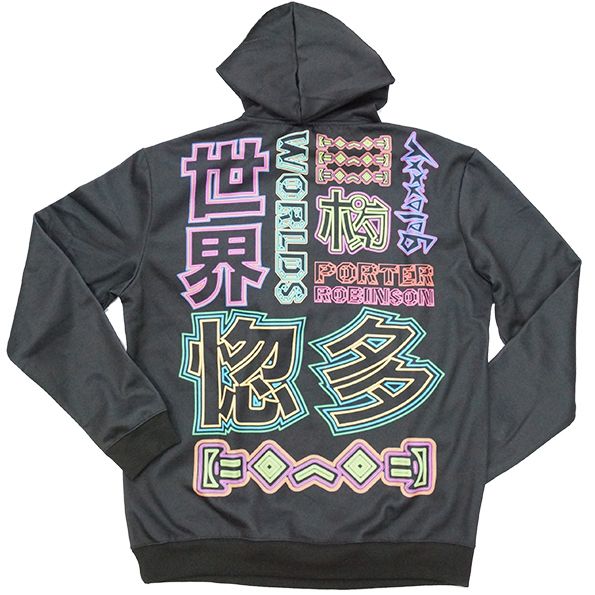 Musical acts haven’t been the only ones to join forces with the company–comic artist Ayako Hishinuma and illustrator Ruka Noguchi have also donated plenty of designs, leaving their unique stamp on this diverse collection of kooky clothing.

Personally, I find that’s the differentiator between galaxxxy and other Harajuku fashion labels: you never know who’s going to pop up on your next shirt or dress.

We at OTAQUEST collaborated with galaxxxy on an exclusive colorway T-shirt, in both black and white. I know, hard choice.

Where can I buy galaxxxy clothing?

The problem with Harajuku fashion is getting your hands on it without a thousand dollar plane ticket to the land of the rising sun. In the past, shipping prices have been exorbitant, if international shipping is offered at all.

Certainly, if a trip to Japan is in the cards, nothing compares to strolling into the store and trying on what strikes your eye. But if you’ve got your credit card in hand and want to have a go at buying online, there are options.

Luckily, galaxxxy has experimented with US sizes in the past, and while many pieces are one size only, it seems to be large and long enough for most buyers to wear comfortably. The brand itself has an eBay shop with limited offerings, while popular site Tokyo Otaku Mode has quite a few items for sale, though they go fast.

The Japanese galaxxxy site does not ship overseas, so fans are encouraged to keep an eye on their eBay storefront for new offerings abroad.