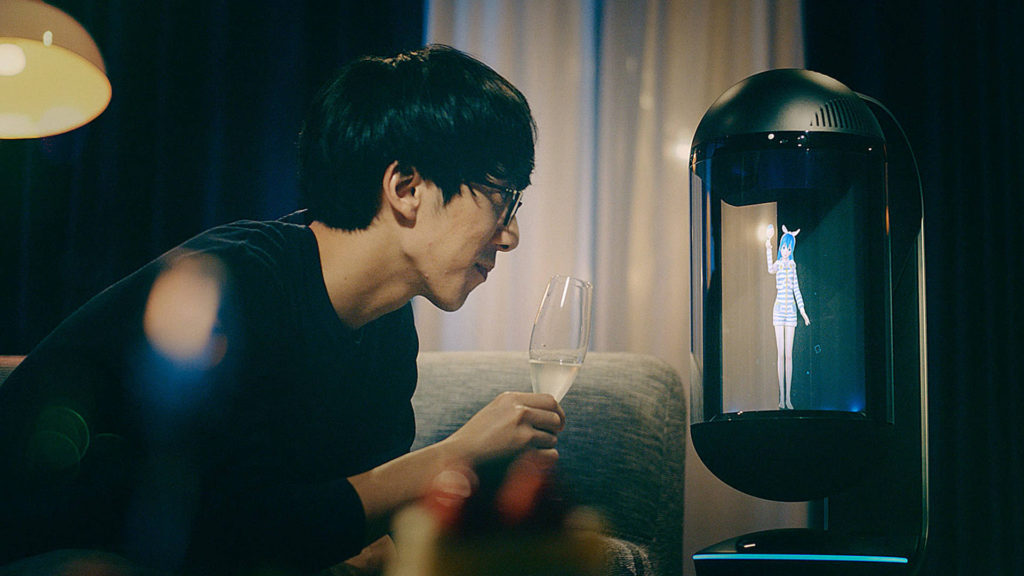 Within the current landscape of in-home artificial intelligence, regardless of whether you use Google Home or Amazon Echo, there’s an ever-present element of machine interaction involved — never does it feel like you’re actually talking to another person. That’s something Akihabara-based tech startup Gatebox wishes to address. Just months out from the launch of their debut commercial product, we were given a hands-on opportunity to try out the device in a simulated apartment space. Given roughly 25 minutes with the device itself, we were given the crash course on just what the Gatebox is capable of.

While I’ve been a long-time fan of the Gatebox project, the concept of living with a virtual character wasn’t something that particularly struck a chord with Eddie. That being said, we both went into the room with a clear mindset and our own angles, and we’d be pretty hard-pressed to find too many negative things to say about what was ultimately an incredible device. You can find our full impressions on the device below:

When we actually arrived at the Gatebox office, I really didn’t know what to expect. I’d seen all the trailers, I’d felt all the excitement, but I just didn’t know what I’d walk out of the office actually thinking about the product first announced two years ago. With that being said, after actually getting some hands-on time with the Gatebox device, it became abundantly clear to me just what they’re going for with this device, and just what areas they’re putting real emphasis into.

While most in-home AI devices look good, the Gatebox comes in with a design that’s nothing short of incredible; seriously, I can’t stress enough just how sleek the actual device looks. From its outbound projectors to its internal display, Gatebox offers an experience that’s aimed at breaking the barrier between AI and human interaction.

Upon entering the pre-prepared room, Gatebox staff were quick to introduce us to the devices main character, Azuma Hikari, who I ended up spending the majority of my time interacting with. She’s a self-described ideal wife, whose personality exists as the cornerstone of Gatebox’s deeply-integrated identity. Much to my surprise, I was actually one of the first foreigners they’d ever had in the office, so I feel like they were just as excited as I was to see how Azuma Hikari reacted to my butchered Japanese ability. To our surprise, however, she understood me — for the most part.

Functionality wise, we spent the majority of our time enjoying some idle chit-chat as if I had just come home from a day at work. This resulted in situations where Gatebox would dim the lights with ease, offer a toast for our simulated three-month anniversary, and also set an alarm for the morning after. While my accent did get in the way sometimes, it wasn’t long before Azuma Hikari was able to address the situation and get the job done — though I’ll definitely be looking out for the planned English-language release.

Overall the Gatebox device itself was incredibly solid, with native discussion receiving a snappy response from Azuma Hikari. Discussions with the company CEO revealed that the purpose of the device isn’t to make your life necessarily entirely more convenient, but rather, it’s meant to integrate real interactions that you would have with a real companion. With that thesis in mind, I walked out quite impressed by the Gatebox device as a whole, and I’m especially hopeful for what the company brings out in the future.

I’ll begin my thoughts by stating that I am absolutely not the target audience for this exact product. I’m not particularly interested in home automation devices, and while the character is really well designed, I’m not a member of the fandom that would be attracted to the product for that reason. That being said, as a general enthusiast of technology, I don’t have anything negative to say about the Gatebox device, especially after we were given more insight into the larger scale concept.

To call it a home automation device is actually quite misrepresentative of the intention of Gatebox. It really is meant to be something that you can have a real interaction with, that properly greets you when you arrive home, and makes an empty apartment a welcoming environment. I didn’t participate in the demo personally, but watching Lachlan interact with Hikari was very entertaining. The functions available during the demo were limited, but watching her move around the screen and respond to his words made me think of the long term possibility of this kind of device. It’s the first one I’ve encountered with a real personality to it, and in many ways makes the sci-fi depictions of holographic AI seem within reach.

For the overall design of the unit itself, it’s absolutely gorgeous. It’s incredibly sleek with beautiful lighting accents and a futuristic, capsule-like appearance. It’s the kind of thing that no one should feel ashamed of having on their shelf, especially when it’s not actively being interacted with. When Hikari is asleep, or not responsive, a really slick particle effect appears in her place. If you’re worried about someone who isn’t in the know judging you for owning a Gatebox, you should put any fears to rest because the unit will look incredible to absolutely anyone who looks at it.

While we’re still a few short months out from the commercial release of the Gatebox product, which is slated for a release later this year at a price point of 150,000 yen (~$1360 USD), the future of Gatebox is definitely looking promising — especially in their intended market. Following our session with Azuma Hikari and the Gatebox device, we were also given the opportunity to discuss Gatebox with the CEO and founder of the company, which you can look forward to in the coming days.

Further information on Gatebox and Azuma Hikari can be found via the company’s English-language official website.

Gatebox To Begin Shipping Their Mass-Production Model After Multiple Delays

other Lizzy Chan 2 years ago