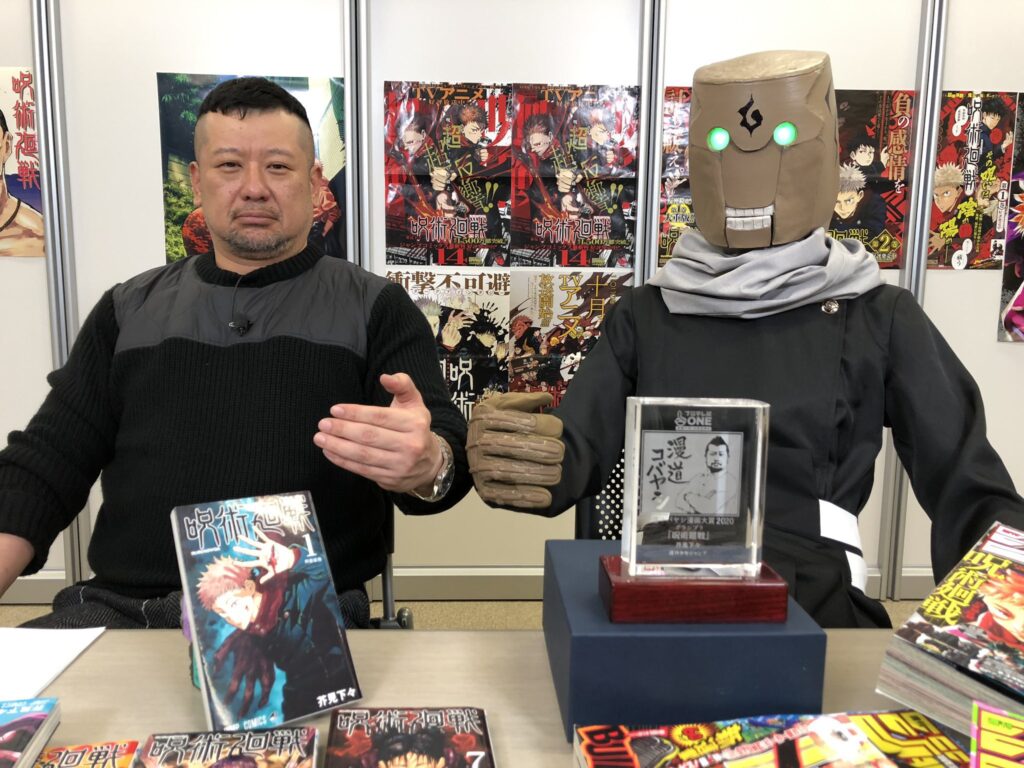 Considering the enormous success of their Weekly Shonen Jump series and Studio MAPPA’s subsequent anime, perhaps it was only a matter of time before Jujutsu Kaisen author Gege Akutami made their first appearance on TV. But here’s the twist: they don’t want to show their face, so they’ll be doing the whole thing in Mechamaru cosplay!

Jujutsu Kaisen was selected as the 2020 Grand Prize winner for Japanese comedian Kendo Kobayashi’s monthly manga variety show Mando Kobayashi, so Gege Akutami’s first TV appearance is to commemorate that. Airing on 30 January and 27 February over two parts, the young author joins the likes of Kohei Horikoshi (My Hero Academia) and Kaiu Shirai and Posuka Demizu (The Promised Neverland) to mark the third time that an author or set of authors serialized in Weekly Shonen Jump has won the award.

Gege Akutami has been interviewed by multiple outlets before, including the French newspaper Le Figaro, but has yet to make an appearance on TV. That’s pretty surprising, honestly, but that all changes on 30 January when we’ll get to hear their voice for the first time, provided that it isn’t passed through a filter to make it sound like Mechamaru’s too, of course.

It isn’t all that unusual for manga authors to hide their faces while doing interviews. Eiichiro Oda, author of One Piece, always has an image of Luffy overlaid on his face to cover it up, while Paru Itagaki goes the whole hog and dons a giant chicken mask. Gege Akutami’s method, however, seems a bit more guerilla: while it’s not bad by any means, the costume appears to be handmade, with imperfections in the helmet and teeth sculpt.

I’m just imagining Akutami scrambling to put this together in his atelier, perhaps enlisting the help of one or two assistants along the way. ‘Akutami-sensei, the papier-mâché is ready!’ Maybe that’s why they took a week off back in December? Who knows.

Gege Akutami will appear on TV for the first time as part of Mando Kobayashi on 30 January. It will be broadcast on Fuji TV One from 11 p.m. to midnight.