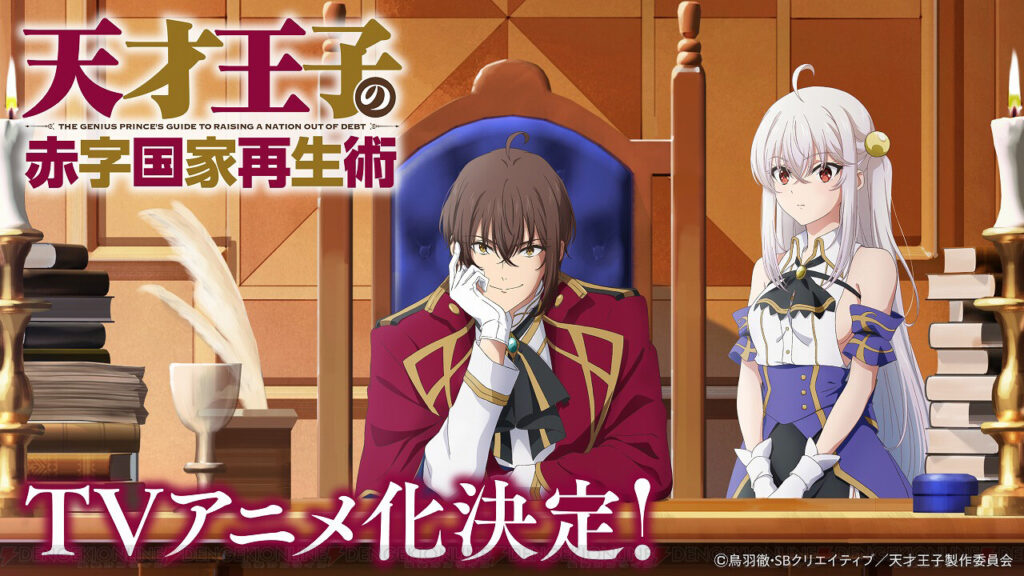 Isekai is as Isekai does. In our modern era, we must accept that these ‘hapless chap sent to another world’ stories are part of the anime diet for the foreseeable future. As they say, if you can’t beat them, join them, and when these light novel adaptations have some additional hook to them beyond RPG parody, it helps to ease in newcomers and resisters alike. The Genius Prince’s Guide to Raising A Nation Out of Debt light novel series, originally penned by Toru-toba and illustrated by Fal_maro (available in English right now courtesy of Yen Press), built an audience by offering an active political twist to the formula. If light-novels aren’t your thing, an anime adaptation has just been announced, a big old Light Novel festival to the excitement of many.

Though often light-hearted, The Genius Prince’s Guide to Raising A Nation Out of Debt series does get into some nitty-gritty with its schemery and statistics. Those original novels aren’t known to get into Spice & Wolf or Kaiji level money scams, but they do occasionally take themselves seriously. Starring the so-called Genius prince and his assistant, who totally isn’t Emilia by the way, the series revolves around him trying to improve the status of his nation so he can live a carefree life. With the book series still ongoing, we suspect he’s yet to accomplish his task.

The Genius Prince’s Guide to Raising A Nation Out of Debt eludes being an Isekai in the very technical sense. Wein, the smirking Genius Prince pictured above, hails from his very kingdom! From another world he is not! However, the show following the once ridiculous but now standard isekai naming convention, coupled with the RPG-fantasy trappings of all Isekai show, firmly place this one in the isekai category spiritually. Perhaps that logistical difference combined the novel’s penchant for occasionally getting nerdy with its probabilities and economics will make for the resulting show being somewhat different from all the others that, uh, look like it!

A release date for The Genius Prince’s Guide to Raising A Nation Out of Debt remains unannounced.