Geralt of Rivia Joins the Hunt in Monster Hunter: World 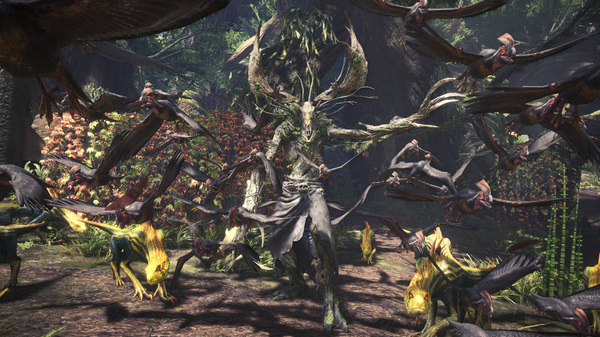 “Are you saying that this creature could have come from another world? Seems like a lot of that going on lately…” – The Commander

One of the most exciting parts of Monster Hunter: World is its constant collaborations with other franchises. In addition to the armour sets like Dante from Devil May Cry or Ezio from Assassin’s Creed, they’ve even added the Behemoth from Final Fantasy XIV as a monster that can still, to this day, be hunted. The game is constantly finding reasons for fans to return, especially with the announcement of the Iceborne expansion releasing later this year with new areas and monsters to hunt.

The most recent collaboration in Monster Hunter: World fits particularly well into the general story. One day, a strange creature appears in the Ancient Forest and follows your palicos back to base. As the cast wonder where it might’ve came from, Geralt of Rivia from The Witcher 3 appears through a portal, stating “Not again! Damned portal! And folk wonder why I hate ’em.” This is a reference to his appearance in Soul Calibur VI, where he also appeared through a portal. He also just hates portals in general. 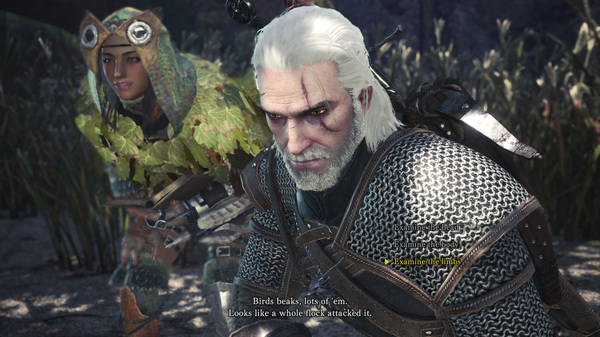 From there, the player takes on the role of Geralt, taking on a variety of tasks and getting familiar with the world of Monster Hunter. It’s here that he discovers the Leshen, a magical humanoid forest creature from his own world that the player battles.

Voice actor Doug Cockle returns to his role as Geralt for this mission and has plenty of opportunities to banter with the members of the commission. The acknowledgement from the commander above about creatures coming from other worlds makes these sorts of collaborations feel genuine and believable within the context of the game. It’s nice to think of all video games as being parallel worlds that can occasionally cross over.

From this collaboration, players will be able to craft Geralt’s armour and other items. However, on February 15th, a new quest will be launched where player will have the chance to craft Ciri’s (also from The Witcher 3) armour and dual blade weapons. The last chance to get these items will be March 1st, although it’s not yet been mentioned if the Leshen will remain in the game like Behemoth has. Either way, it’s worth getting to the wild hunt some time soon!