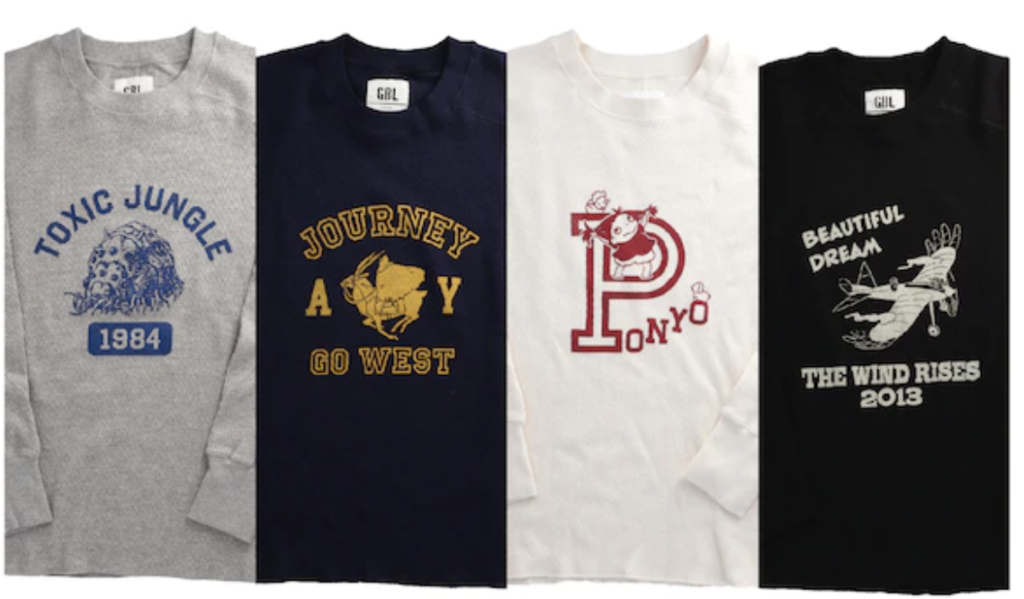 Sacred as their films may be, even Studio Ghibli has to pay the bills. When Miyazaki hasn’t put out a film in eight years, how else is the studio going to pay their higher-than-average wages to their animators other than merchandizing the heck out of their films. Compared to most other anime merch though, much of the novel Ghibli stuff is done in-house and released through their Donguri stores. These laidback Studio Ghibli Thermals are taking a slightly different approach.

There’s a catch with these 80-bucks-a-piece Studio Ghibli Thermals, to tell the truth. Unlike most of their in-house merchandise, which can be bought at Donguris on Online, these long sleeve pieces will only be sold at their GBL stores. At the time of writing, there’s only two: in Shibuya’s Miyashita Park and in Osaka. Compared to the Disney Store like Donguri, GBL has a more mature apparel vibe which explains these more subtle design choices! Appropriate for Moms who think it’s cool to have a big bug sweatshirt lambasting ‘Toxic Jungle 1984’, and we mean this with love.

To stray from the topic at hand for just a moment, we must note that we’re absolutely thrilled to see The Wind Rises get some merch representation. Without a doubt, his most recent effort remains his most underappreciated movie, at least from the ones he made at Studio Ghibli. It’s not often we see any ‘collectible goods’ based on the 2013 film except for the smallest of trinkets found only in Donguris. Only being sold at the more ‘marketed to adults’ GBL stores, it makes a certain sense that Ghibli has finally tried to merchandise this underrated part of the Miyazaki canon.

These low-key Ghibli Thermals will hit the Osaka and Shibuya stores shortly.