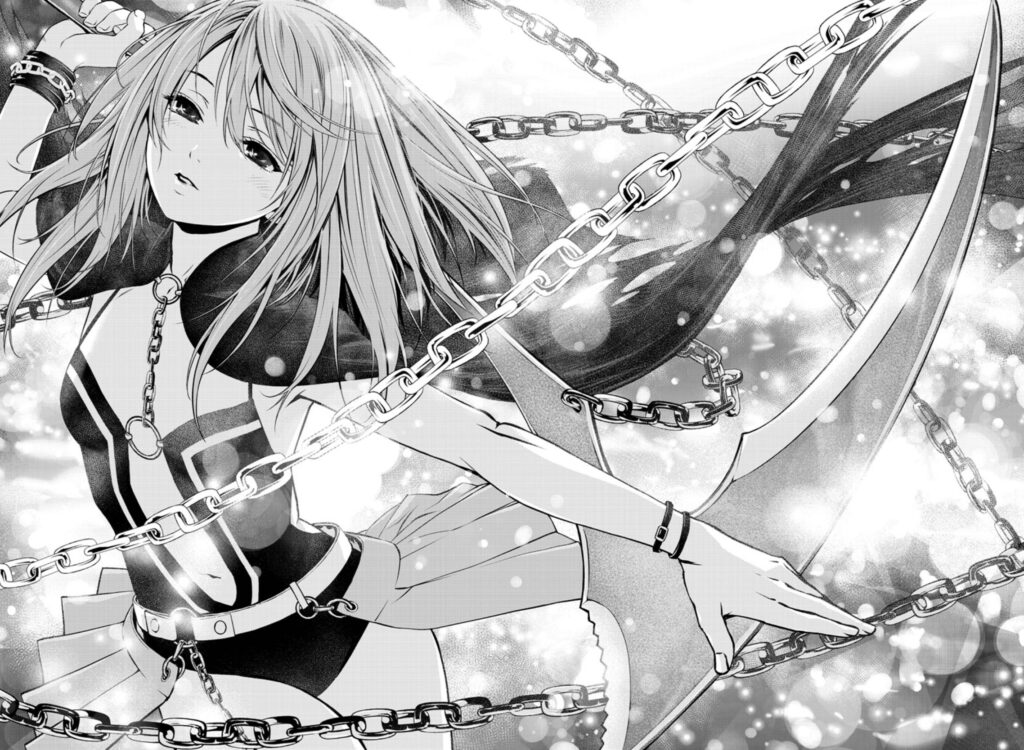 Hello there and welcome to Your Manga Week. Finding time to keep up with all the manga that releases on a weekly basis can be difficult, so I’m here to tell you what’s worth your time and what’s not. We’ll also be discussing the story and arc developments as they come. This week, we’re talking Ghost Reaper Girl chapter 1, Mission: Yozakura Family chapter 43, and Magu-chan: God of Destruction chapter 4.

The biggest piece of Jump news this week is undoubtedly the fact that Haruichi Furudate’s Haikyu!! volleyball manga will be coming to an end on July 20. We suspected as much from a recent leaked Jump GIGA issue, but this is undoubtedly a big deal for Weekly Shonen Jump: not only is it losing yet another successful long-running series, it will also be without a sports series for the first time in its history. That’s a strange thought, although a new series could come along and fill that gap. Speaking of new series, there is actually a new addition to Jump this week: Bunkiten by Kimi wo Shinraku Seyo! author Kazusa Inaoka. Unfortunately, this is only included in the digital version of the Japanese magazine and we haven’t heard anything about an English release just yet. In any case, on with the manga.

Here’s one name I didn’t think I’d see again in 2020: Akihisa Ikeda, creator of Rosario+Vampire, who is making his return to the manga world after several years of absence with Ghost Reaper Girl. Well, he’s going by Akissa Saiké now, which is just one entry in a long list of bizarre typographical changes made for the English language: including flopping the layout of Ghost Reaper Girl chapter 1 (making it read from left to right) and inserting the word “reaper” into the title (in Japanese, it’s simply published as Ghost Girl). Even so, I’d be lying if I said that I didn’t enjoy the first chapter of this new series.

To a certain extent, Ghost Reaper Girl chapter 1 comes at a bad time. It is yet another supernatural series focused on ghosts and demons, joining the likes of Bone Collection and Ayakashi Triangle in what is becoming an increasingly oversaturated market. That last example is particularly salient as Saiké’s new series essentially reverses the concept of Kentarou Yabuki’s own: using the same concept of a “spirit medium,” it essentially places Suzu in the protagonist role as opposed to Matsuri. 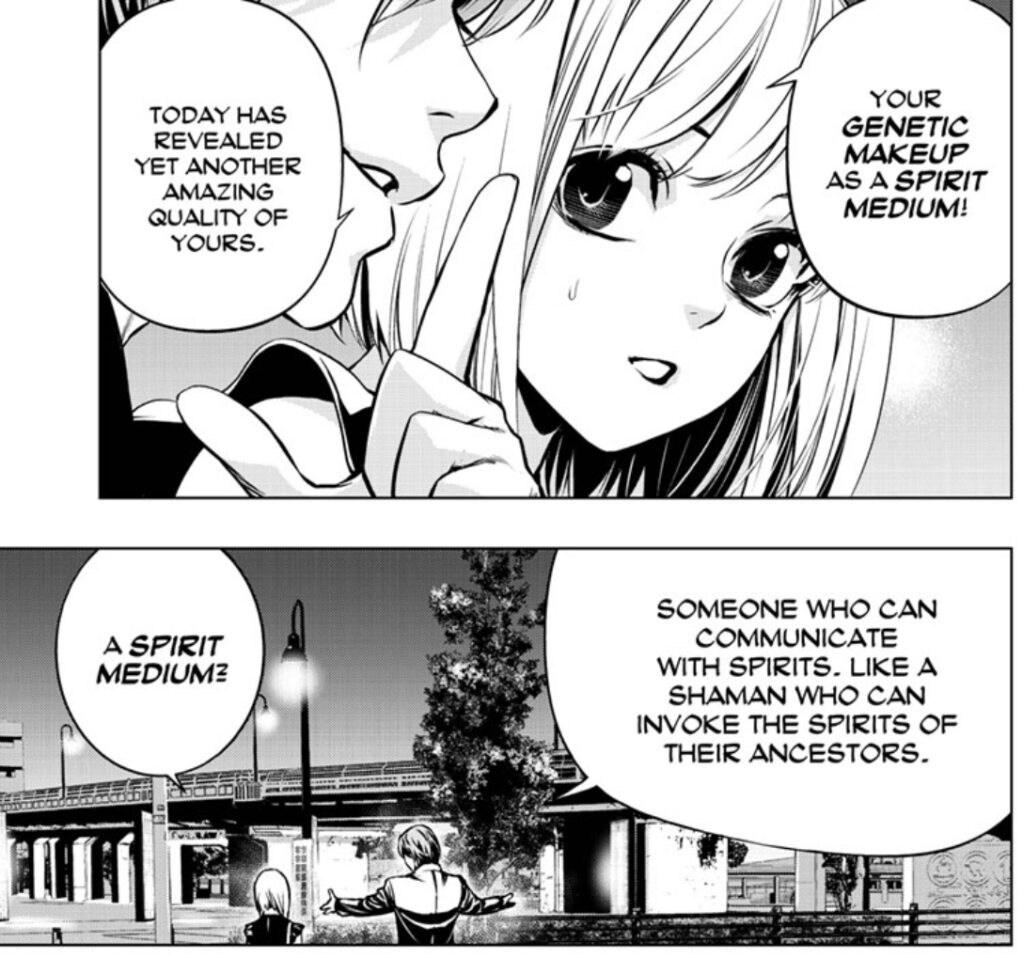 Even so, the concept of a spirit medium has been around for centuries, being a key part of Japanese mythology and Shinto folklore. I’d also argue that it is because of the way that the series is published in English that places it in direct comparison with its peers: in Japanese, it is published exclusively on Jump Plus, whereas in English it is placed alongside the likes of Bone Collection and Ayakashi Triangle under the “Shonen Jump” umbrella as established by VIZ Media. If Ghost Reaper Girl chapter 1 had been separated from the rest of the Jump lineup, then I can’t help but feel like we’d be having a very different conversation.

Furthermore, there is plenty to like about Ghost Reaper Girl chapter 1. Following the story of our protagonist, Chloé Love, it plunges us into a world of demons and mythology, complete with a handsome sidekick from Hell (Kai Iod) and a magical girl transformation. Aside from the consistently solid artwork and character designs (veteran artists always seem to put the newbies to shame), I particularly enjoyed how Saiké gets us immediately on board with Chloé’s character, as we see her struggling to make it in the acting industry. As a fellow creative, I can definitely empathize with that.

That being said, there were some aspects of Ghost Reaper Girl chapter 1 that had me raising my eyebrows. First of all, there is Kai’s self-introduction as a “lolicon” – something that I don’t particularly have a problem with, but hardly felt warranted beyond a throwaway gag. There are also multiple illusions to rape and sexual assault throughout the chapter: aside from the fact that the demons want to constantly “go inside” Chloé spirit medium body, there is also the moment where she appears to be assaulted by a casting director. 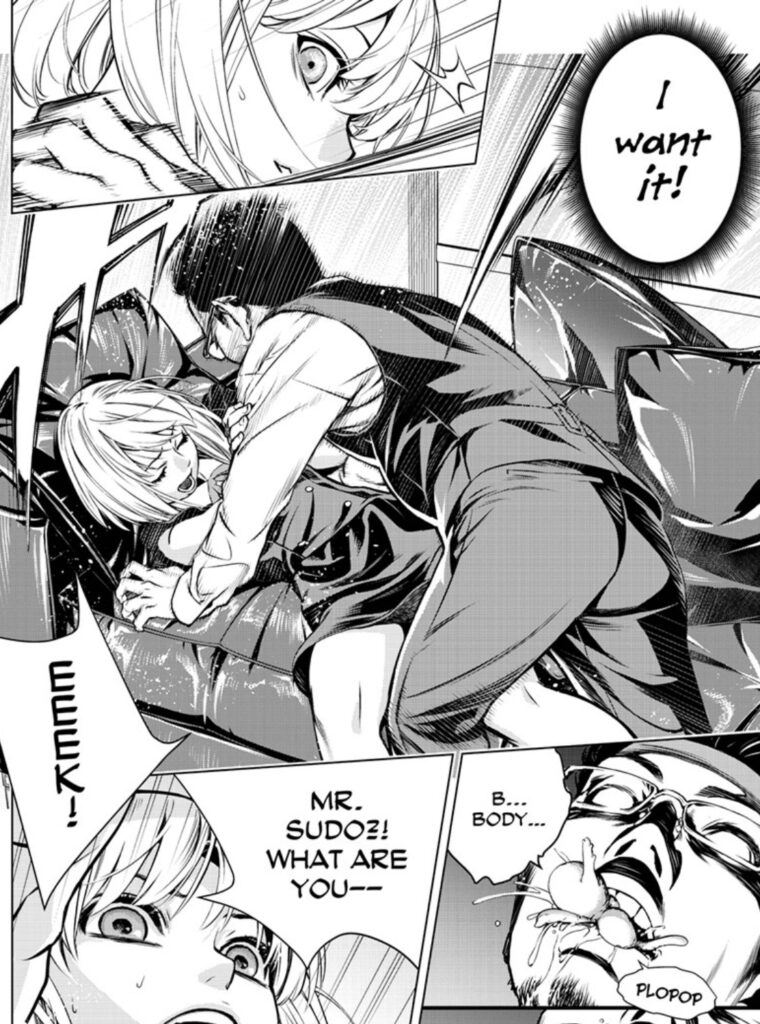 Certainly, you could argue that the demon is what makes the director do this, but the parallels are clear. It is this moment, along with others, that have me wondering whether or not Saiké can really make a comeback in 2020: he definitely has the talent and prior experience, which shines through in the artwork and storytelling in this chapter, but there is no denying that Ghost Reaper Girl chapter 1 comes at a very bad time and makes several strange creative choices. I certainly enjoyed reading this first chapter and am curious to see where it goes next, but I’m not exactly holding my breath.

It has been a while since we last featured a Mission: Yozakura Family chapter in the lead. That’s because my enjoyment of the series has been stagnating for a while now: I am continually disappointed by the series’ obsession with introducing new characters and failing to develop the old ones. Even so, just as I was thinking that this series might be all breadth and no depth, Mission: Yozakura Family chapter 43 comes along and proves the series’ worth yet again.

Mission: Yozakura Family chapter 43 follows Taiyo as he undertakes a mission from the hammer-wielding detective Hotokeyama to infiltrate a high-security prison and uncover the identity of a mysterious killer. Immediately, I was pleased to see the series actually making use of previous characters – Hotokeyama was introduced back in chapter 9 – and my enjoyment only continued from there, as author Hitsuji Gondaira delivers several sharp gags about Taiyo proving his strength to his fellow inmates.

Once the killer takes the bait and reveals himself to Taiyo, Mission: Yozakura Family chapter 43 made me do something that I honestly don’t think I have ever done while reading the series before: stop and take the atmosphere. This is because the killer, named Shiro, has a striking character design, and the staging of the scene where he enters Taiyo’s cell is full of tension. It’s a shame, then, that Hotokeyama immediately appears and resolves the situation for him.

This tiny scene in Mission: Yozakura Family chapter 43 can, in embryo, be seen as an encapsulation of everything that makes the series so frustrating. On the one hand, by introducing such new elements as the prison setting and Shiro, Gondaira is able to deliver some engaging storytelling and even provoke fear and anxiety. Yet, on the other hand, it is by the slavish adherence to an episodic structure that Gondaira robs himself of the possibility of going even further. Wouldn’t it have been great if we got to follow more of Taiyo’s life in prison as he investigates the mystery, as well as explore more of what makes Shiro tick? It’s no exaggeration to say that literally seconds after meeting Shiro, Taiyo is saved by the deus ex machina that is Hotokeyama. 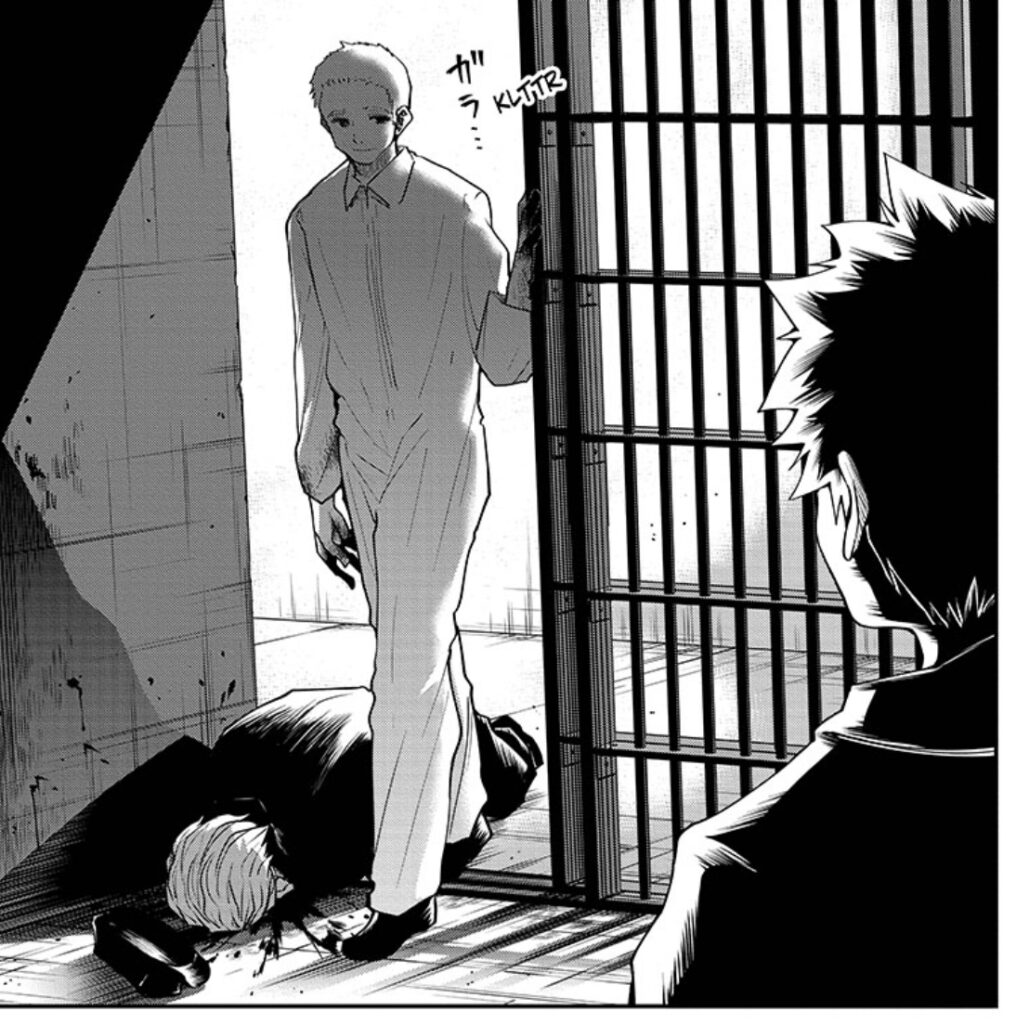 At least Gondaira is using one of his previous characters, however, as well as linking Mission: Yozakura Family chapter 43 back to the overall narrative. As it turns out, Shiro is actually a member of Tanpopo, which gives us a little information on the mysterious organization that took out Taiyo’s family. Who knows if this will have any effect on the story going forward, however, as Gondaira is just as dedicated to the episodic structure as he seems to be to dragging things out as long as possible.

To conclude, while the series has recently celebrated its first anniversary and is now the tenth oldest series in the Jump roster, it still feels like a very mixed bag. Some weeks, I come away frustrated and confused. Other weeks, I come away excited and enthused. Mission: Yozakura Family chapter 43 definitely falls into that latter category, even though it does have its fair share of faults.

Finally, we come to Magu-chan: God of Destruction chapter 4. Last week, I tackled the glut of comedy series currently pervading Weekly Shonen Jump, touching on both the new series Me & Roboco and the more established Mitama Security: Spirit Busters. There, I made the point that one of them was going to have to make way sooner rather than later, but this week’s Magu-chan has me firmly convinced that it should not be Kamiki Kei’s newly-launched series.

Magu-chan chapter 4 once again focuses on the daily life of the God of Destruction Magu Menueku and his owner/servant Ruru, this time centering around the theme of desert. While Ruru is at school, Magu ends up eating the two puddings that were in the fridge, provoking a fight between the two. Determined to repair their relationship, Magu then sets off to obtain some more – hilarity ensues.

The way that the gags come thick and fast in Magu-chan chapter 4 honestly reminds me of Mitama Security at its peak. That cements in my mind the fact that that series has to go, especially considering how underwhelming this week’s chapter was. In any case, the way that Magu first transforms into a pudding, then meets Naputaaku (another mad god character introduced last week), and finally comes face to face with an automatic door – which he assumes is a force field – had me smiling ear to ear and thoroughly entertained. 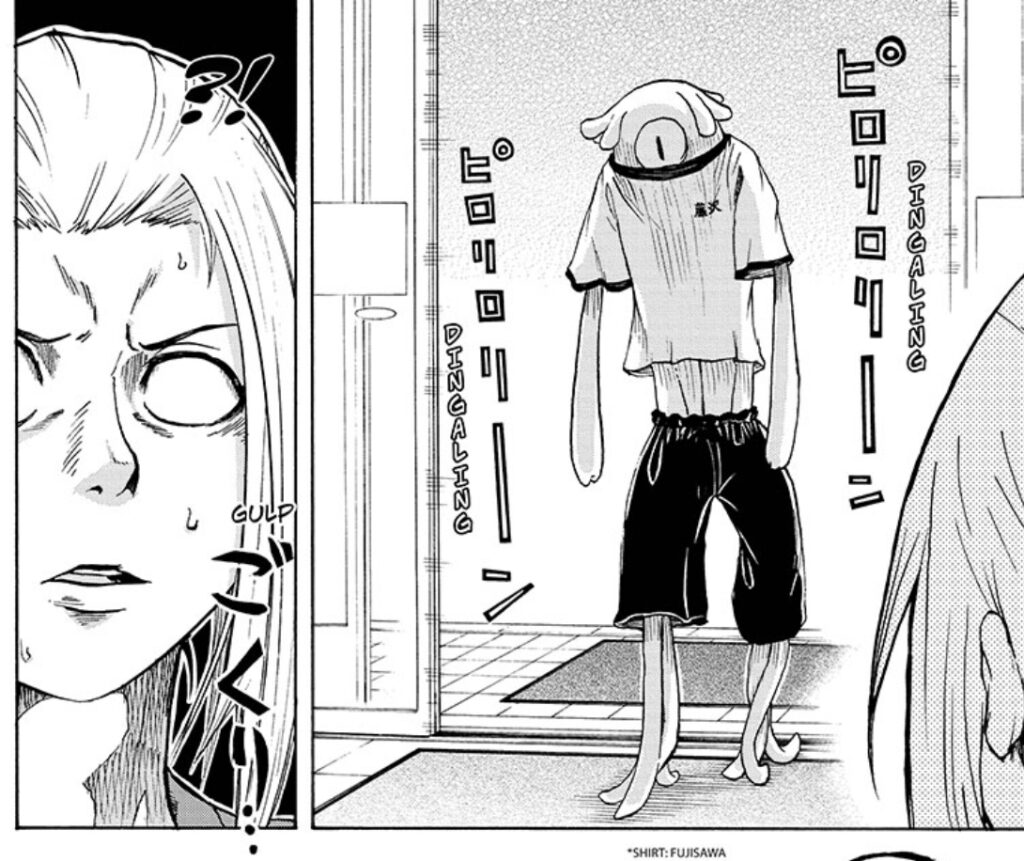 Perhaps my favorite gag in Magu-chan chapter 4, however, is the one involving the cashier. Kamiki builds this joke up quite a bit, to be sure, but that ends up paying off: it is by delving into his backstory that we can fully comprehend the effects of seeing an alien-like creature waltzing into the store on his current psyche and future life path. The punchline that he goes on to form a cult death metal band to worship the alien that he saw that day, then, is just the icing on the cake.

I enjoyed Magu-chan quite a bit upon its debut, but that appreciation has only deepened in recent weeks. In particular, I really like author Kamiki Kei’s combination of the crass and the refined; the primordial and the ordinary, as well as the relationship between Magu and Ruru. Ruru’s admirer, Ren, also plays an entertaining role as the straight man to Magu and Ruru’s antics. Weekly Shonen Jump does still definitely need to purge itself of some comedy series, but this one ain’t it.