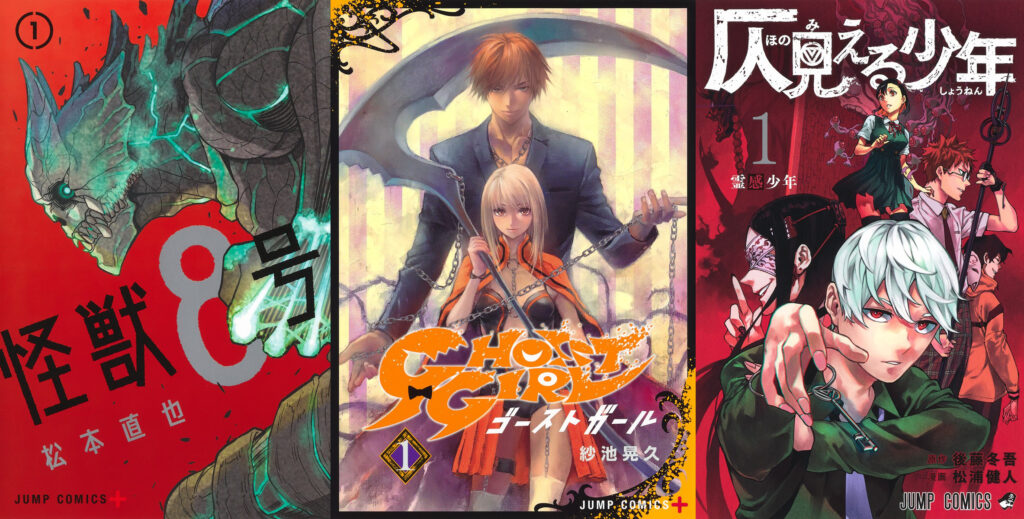 It’s that time of the month again: new Jump volumes are upon us! On 4 December, Kaiju No. 8 and Ghost Reaper Girl volume 1 by Naoya Matsumoto and Akissa Saiké respectively tested their luck from Jump Plus across from Phantom Seer volume 1, the latest Weekly Shonen Jump series to see a debut collected volume release from writer Tougo Gotou and artist Kento Matsuura. How did they do in terms of sales?

Let’s get the bad news out of the way first: Ghost Reaper Girl volume 1 did pretty badly. According to Shoseki rankings, the series’ first book debuted at number 409 on the first week of its release and number 419 on the second, shifting a combined estimated total of around 5000 units.

For any other publisher, this would be pretty respectable, but Shueisha is notoriously strict when it comes to series published under its Jump label. The digital Jump Plus service may also have a little more wiggle room as it doesn’t have competition over physical magazine spaces, but it’s hard to argue against what is implied by Ghost Reaper Girl volume 1’s poor sales performance: the series simply isn’t resonating with a large amount of people.

This becomes even more obvious when comparing Ghost Reaper Girl volume 1’s sales to the likes of Kaiju No. 8 and Phantom Seer volume 1. As expected, Naoya Matsumoto’s viral hit absolutely smashed the competition even in volume format, coming in at number 22 on the first week of its release and number 25 on the second (highlighted in green). It has managed to ship a combined estimated total of at least 100,000 units.

Even so, Phantom Seer volume 1 (blue) also put in a solid sales performance. For a new series effectively created by two rookies (Matsuura did art previously for Tokyo Shinobi Squad, but that didn’t do very well), it’s honestly impressive to see it rank in at number 142 on the first week of release and 219 on the second. It will have easily managed to ship well over 10,000 units.

(As usual, we have to take this opportunity to remind our readers that Shoseki rankings are, at the end of the day, estimations, and fail to take into account several key retailers: anime and manga speciality stores such as Animate, as well as Amazon. Digital sales aren’t included, either.)

Nevertheless, Kaiju No. 8 and Phantom Seer’s volume 1 sales success does speak to the fact that both of them are pretty good,  even if I do enjoy Seer more than Kaiju. And then we have Ghost Reaper Girl: a series which, to be honest, has dragged on for eleven chapters now without really giving me any reason to stick around.

Based on this sales data, it looks like I’ll have that decision made for me relatively soon.

You can read Ghost Reaper Girl, Kaiju No. 8, and Phantom Seer for free via VIZ Media’s Shonen Jump.