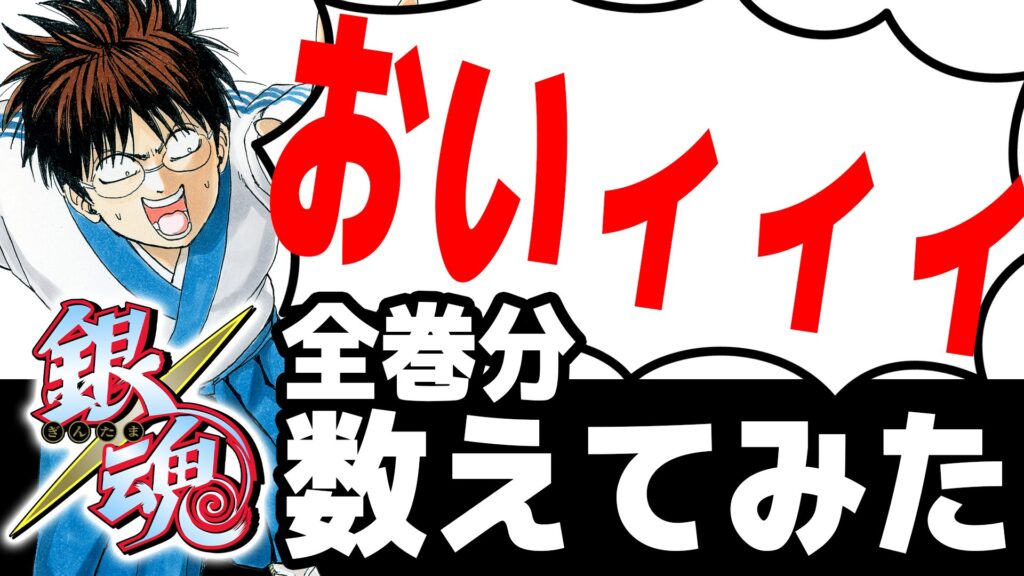 ‘Oi!’ is an exclamation spoken many times throughout the course of Hideaki Sorachi’s rowdy Gintama by its equally rowdy cast of characters, but how many times is the phrase said exactly? Across 77 collected volumes and over 700 chapters, Shueisha recently took the time to sit down and work it out: presented in a video on the Jump Comics Channel, the amount is truly astounding.

In the video, the narrator explains that while Gintama is known for its ‘high sense gags,’ there is one thing that makes them work even better: the existence of a ‘straight man’ (tsukkomi). In the series, this is played by any one of the characters (be it Gintoki, Shinpachi, or Kagura) and is often signaled by the exclamation ‘Oi!’, expressing shock or disbelief. This brings the humor felt by the audience into the series, thus boosting its comedic effect.

But enough about the science of comedy. How many ‘Oi’s are spoken in Gintama? Handily enough, Shueisha shows their working in the video, going through every single chapter since the debut and increasing the ‘Oi’ count whenever they encounter the phrase. It goes slow at first, allowing the user to take in just how many ‘Oi’s there are, before the narrator chimes in, saying, ‘It’s taking too long, so we’re going to speed up.’ It then advances rapidly through the rest of the series, right up until the final chapter 704.

The final number of ‘oi’s is, apparently, 1883. To put that figure into perspective, Gintama says about as many ‘oi’s as the number of years it took for John Kemp Starley to invent the first modern bicycle in 1885, or for Thomas Edison to build the first electric light system using overhead wires (1883). Truly, Gintama is a story that spans the length of human history, and will hopefully endure the test of time.

All of these Gintama ‘oi’ shenanigans are intended to promote the franchise’s final film, Gintama: The Final, which is in theaters now. Although it’s since been beaten back down, it did manage to take the top spot from Demon Slayer: Kimetsu no Yaiba Mugen Train for just one week when it premiered on 8 January. That shows that it is still loved, no doubt in part due to the importance of ‘oi’s and tsukkomi comedic techniques.