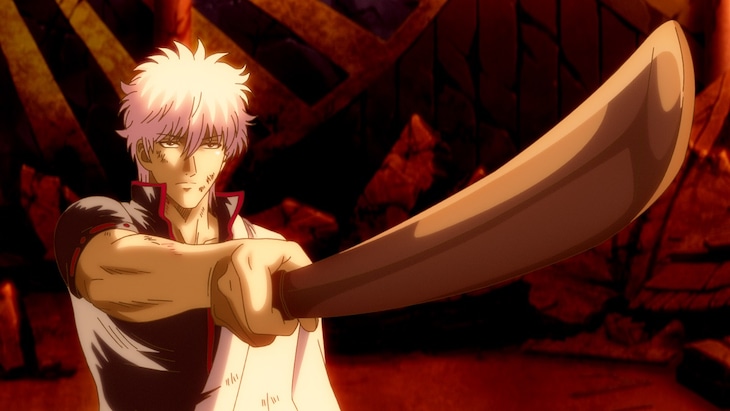 Gintama’s manga ended a year ago, but not before faking us out a few times first. It goes without saying that people were rightly skeptical when Gintama: THE FINAL was first announced back in August. October’s trailer for Gintama: THE FINAL even came with text reading, ‘It’s not a scam,’ and ‘It’s really the last one,’ which was screaming with big ‘dude, you just gotta trust me on this’ energy. Now more Gintama: The FINAL news has dropped in the form of a new trailer.

Gintama’s official website dropped their latest trailer for Gintama: THE FINAL on Tuesday, featuring all the shonen action and a few instances of crude humor fans have come to expect over the years. DOES, the rock outfit famous for doing a few of Gintama’s OPs, also had the names of their two insert songs revealed as ‘Wadachi (Tracks)’ and ‘Breakdown.’

Gintama: THE FINAL limited-edition stickers will be handed out as part of an admission gift, as well as copies of a special Demon Slayer: Kimetsu no Yaiba illustration card drawn by Gintama mangaka Sorachi Hideaki at select theaters the initial week of the movie’s release. Understanding how Gintama works, these cards will probably serve to parody ufotable’s popular shonen as much as it serves to advertise. I’m betting to see Mayonnaise Slayer featuring Toshiro Hijikata, but that’s just me.

News of this movie came seven years after the anime movie Gintama: The Movie: The Final Chapter was released in theaters, which was initially supposed to be the real capper for the anime adaptation. But it would only truly be the end if The Last Chapter somehow failed to meet expectations. ‘Even though we have been thinking that this film would mark the end,’ director Yoichi Fujita would note, ‘if the movie is a hit, I believe that the higher-ups would definitely not keep quiet about it.’ Seeing how Gintama’s manga has sold over 55 million copies and the anime has maintained its loyal following over its fourteen-year run, it’s not too farfetched to predict that a Gintama: THE FINAL 2, Electric Boogaloo is on the horizon.

Gintama: THE FINAL is expected to hit Japanese theaters on 8 January 8 2021.