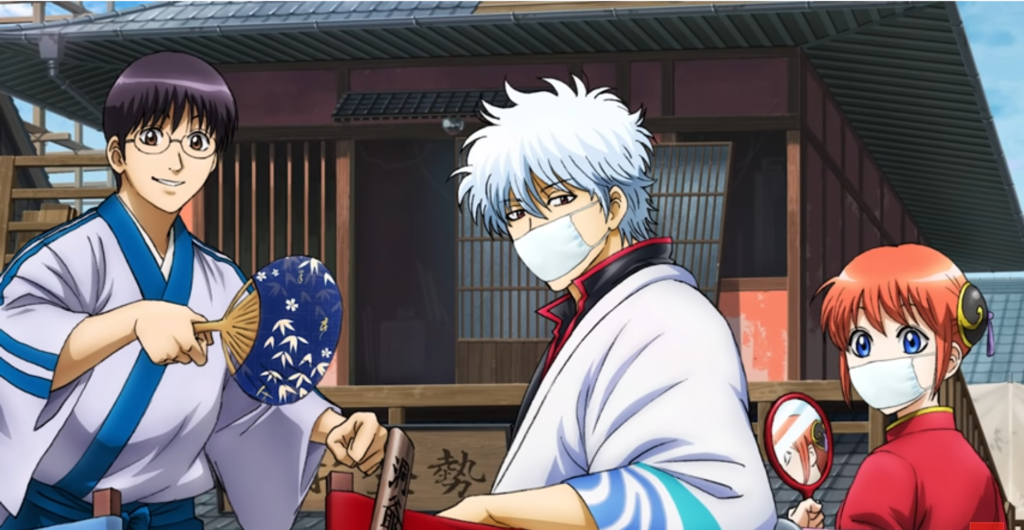 One year ago, we got word that a third Gintama anime film was coming sometime in the future. The manga had finally finished its 77 volume run for real, after jumping from Shonen Jump to Jump Giga to Gintama’s dedicated app, and it’s TV anime had wrapped up in October in 2018. Being such a huge property for Shueisha and its fans alike, it’s understandable that producers and investors wouldn’t want to so quickly let go of a cash cow even if author Hideaki Sorachi has had his fill creating the manga. There was radio-silence on that last film for a while, but we now have a teaser and a date for Gintama The Final.

While there’s no new animation in the first proper teaser for Gintama The Final, we did get a brand new visual featuring Gintoki and Kagura masked up for Covid while Shuichi abstains. Gintama, and the anime in particular, often incorporated current events and satire into its humor and them playing up Corona panic isn’t all too surprising. Sounds like the voice actors for the main trio still have their magic now as much as they did when the anime started back in 2006. That makes us feel old!

So Gintama has teased its conclusions each time alone the way. The 2013 anime film was called Gintama The Final Chapter and the first live-action film swore to be the only one until they released a follow-up a year later. The manga’s refusal to end for real-time and again, until it actually did, was well documented too. Even in this teaser they joke about this movie being Gintama’s true final ‘for real’, nodding to the fact that they always say this and that you shouldn’t be too surprised if 2 or 3 years down the line we got another movie, tv season, or manga continuation.  Good news for Gintama fans.