This seems like has become more of a recent trend with game developers who make arcade titles not doing location tests for their titles as Konami blindly announced today that a new version of GITADORA will be hitting Japanese arcades next week on 21 April. The new version of the title is called GITADORA HIGH-VOLTAGE.

I can’t say that I’m too surprised with the announcement, considering that GITADORA NEX+AGE did not have a location test and that title came out almost two years ago, releasing on 27 September 2019. As with GITADORA HIGH-VOLTAGE, you can expect what you have come to see with major updates to the title, including new songs, a new theme, and possible quality of life changes. As of the time of this writing, Konami has not announced any details about the upcoming title aside from the fact that it’s releasing on 21 April 2021. 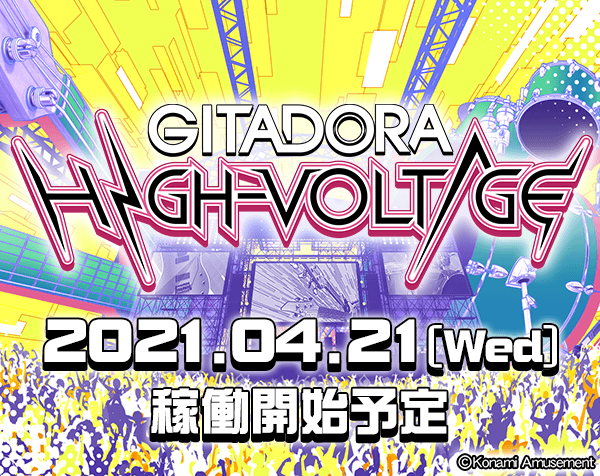 With GITADORA being one of the oldest Bemani titles that Konami still actively supports, I have to say, I’m quite impressed that the title has progressed as far as it has. The first version of Guitar Freaks released all the way back in the early Winter of 1999, with the first version of DrumMania releasing shortly after in the summer of 1999. It will be certainly interesting to see the changes that are coming to GITADORA HIGH-VOLTAGE.