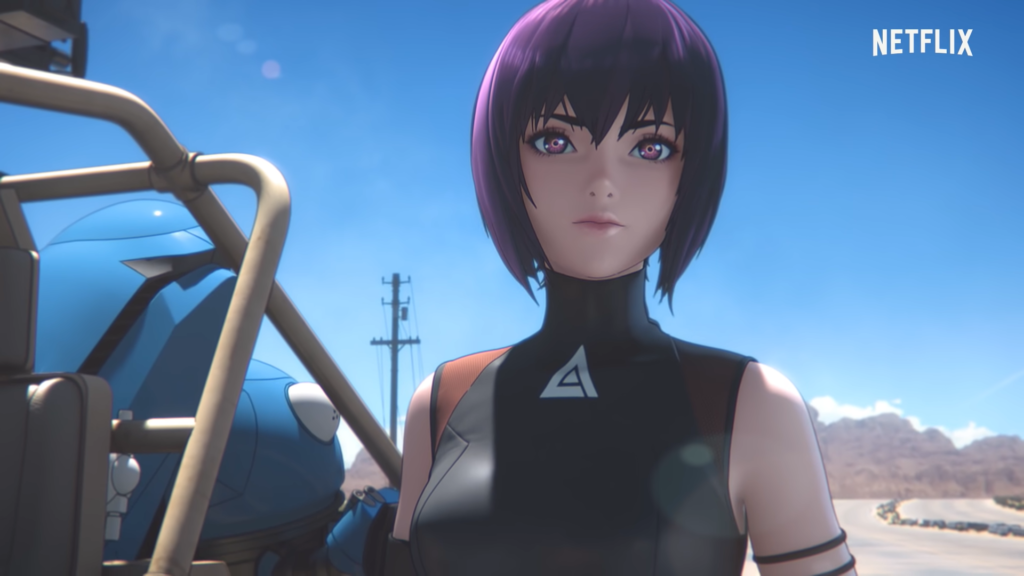 The upcoming Netflix exclusive Ghost In The Shell: SAC_2045 has a lot to live up if it wants to be a noteworthy addition to the ever-growing Ghost In The Shell franchise. After the 2017 Hollywood adaptation of Mamoru Oshii’s hallmark film starring Scarlett Johansson as the beloved Motoko ‘Major’ Kusanagi was, in a word, disastrous, fans were left either wanting something better or ready to let the franchise go after all this time. Production I.G. and the powers at be aren’t so ready to let a moneymaker atrophy just because the live-action movie no one really wanted wasn’t a hit. However knowing they probably only had one more shot to breathe life into the franchise before audiences would lose interest for good, they’ve decided to reignite one of its most significant pieces; Stand Alone Complex. 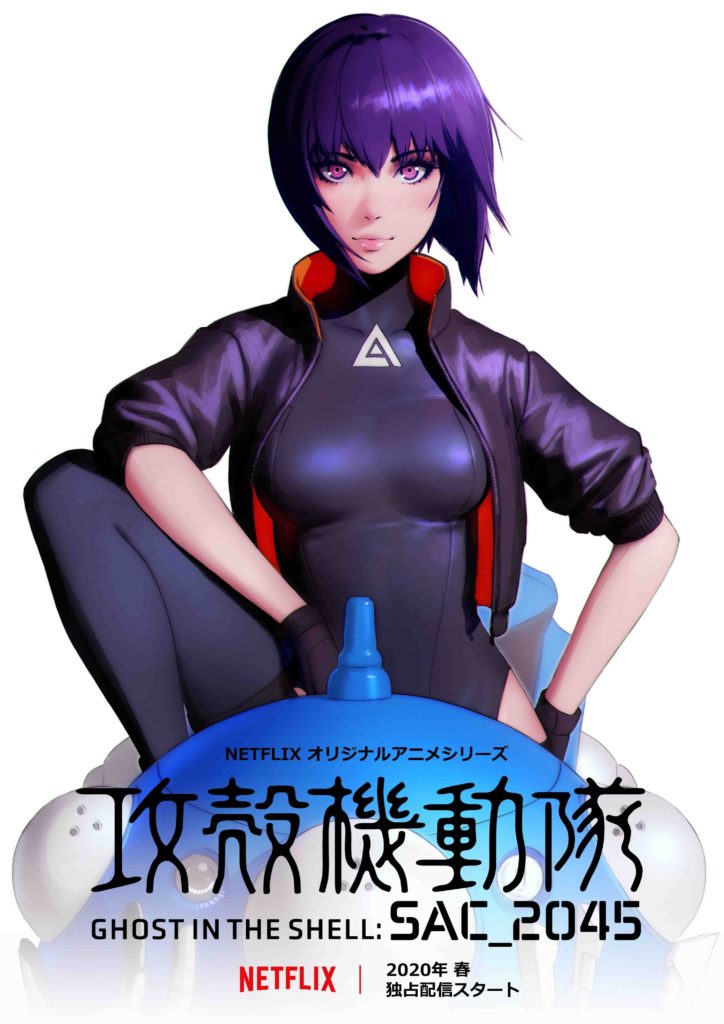 Ghost In The Shell: Stand Alone Complex was something of a miracle. It had been a number of years since Mamoru Oshii’s classic and loose adaptation of Ghost In The Shell, a off the wall cyberpunk manga that was a little too thirsty for its own good, made itself a household name. Popular with more than just anime fans, the original film delighted fans of cinema worldwide and went on to influence The Matrix, a good chunk of electronic music, and all sorts of artists and underground creators in the late 90s. I’d imagine when a new TV series was announced that didn’t feature involvement from Mamoru Oshii, people must have been skeptical. Thankfully though the close-minded were proven wrong, as Ghost In The Shell: Stand Alone Complex ended being very good and grew into its own two series and one film sub-franchise beloved by fans. If SAC_2045 recaptures even half of that magic, we’ll be in good shape.

The genius of Stand Alone Complex was taking the philosophical edge and societal commentary of Oshii’s film and, instead of being as dry monologues and esoteric sci-fi meditations, it was peppered into a show that actually had an incredibly satisfying mystery narrative, character you grew easily attached to, and a lot of get futuristic action a long the way. Maybe the TV series is less of an artistic achievement than the classic movie but I know a lot of fans would say its closer to their hearts. The show was consistently thoughtful, engaging, and human; a modern classic that was a spin-off of another. To this day, you can still see and buy merchandise branded with the iconic Laughing Man logo from Akihabara to anime con dealer rooms and beyond. That’s something completely unique to Stand Alone Complex and not any other piece of the franchise.

Of course, the TV series wouldn’t have been the success it was if it wasn’t for the efforts of director Kenji Kamiyama. He had worked for Production I.G. in the late 90s and 2002’s Stand Alone Complex was his first major project as director. His 2010s output hasn’t been as well-received, but the man was on fire in the 2000s. Eden Of The East, Moribito, the two tv series and movie that comprised the Stand Alone Complex canon; all of these shows are truly great anime that I’d say are required watching. Production I.G. invoking the title SAC_2045 wouldn’t mean much if the man wasn’t returning to do his thing. That’s what’s most exciting about the new Ghost In The Shell anime; Kenji Kamiyama is back which gives me hope this’ll be a return to form. He is bringing Shinji Aramaki along for the ride though.

Shinji Aramaki is a veteran animator whose contributions to the medium can’t be ignored. His mechanical and production designs from all the way from the 80s to the early 2000s helped give classics like Megazone 23, Bubblegum Crisis, and even the original Full Metal Alchemist their visual identities. From the mid-2000s on though he moved more into directorial territory, with much of his efforts going into another Masamune Shirow based series, Appleseed. I’ll state for the record that Appleseed Ex Machina is still pretty good and has a killer soundtrack featuring Yellow Magic Orchestra, M-Flo, and Rei Harakami. I digress though; he never had the directorial magic of Kenji Kamiyama in his prime yet the two have done a lot of teaming up as of late.

The duo crafted this year’s Netflix original Ultraman anime which failed to make a huge impact. Not only are they co-directing the upcoming Ghost In The Shell: SAC_2045 but the anticipated Adult Swim / Crunchyroll co-producer Blade Runner – Black Lotus anime. The two had worked on together on projects when they were coming up in the industry and eventually built a great working relationship. Now they seem inseparable. As we said though, Ultraman wasn’t the greatest first outing for the co-directing unit. Fans said the 3DCG visuals weren’t quite up to snuff. They featured some neat motion capture and action sequences but the style of it all was criticizes. The duo’s sticking to 3DCG for SAC_2045 though so let’s hope they’ve taken the criticism constructively.

The debut teaser for Ghost In The Shell: SAC_2045 only features 20 seconds of animation but it doesn’t look too bad! The major herself has some life in her, and this is thanks in no small part to Russian illustrator extraordinaire Ilya Kuvshinov who went from highly skilled fan-artist to pro anime character designer earlier this year with the movie Birthday Wonderland. Their unique style is decently preserved in 3D and I’m excited to see what the rest of the cast will look like. The original Stand Alone Complex has some very nice looking digital 2d animation that made every episode a treat, but I’m willing to accept the leap into 3D if what Kamiyama and Aramaki animate takes advantage of the switch. Again, while Ultraman didn’t have the most memorable style, it did have great motion capture and choreography. Hopefully we’ll be seeing that same level of work paired with this more palatable look.

One area that I’m afraid can’t live up to the original Stand Alone Complex standard is the music. While I’d love to be proven wrong, the original series had the one and only Yoko Kanno doing the music. Truthfully, it’s my favorite soundtracking work of hers. Synthy, artsy, and taking cues from jazz, like every soundtrack she’s ever done, there’s something wholely unique to it. If they were able to get Kanno to do the music again, I feel like this information would be announced by now. Not that Kanno’s the only good musician in the world; Ghost In The Shell: Arise had Cornelius doing the music and the original film’s soundtrack by Kenji Kawai is up there with Akira’s. Kanno’s sounds though helped make Stand Alone Complex what it was and SAC_2045 won’t be the same without them. It doesn’t mean it won’t be a good show though!

Kenji Kamiyama is working on Ghost In The Shell again and that’s great. He’s making it with Shinji Aramaki though, a remarkable animator in his own right, but their first collaborative effort wasn’t the best. Ilya Kuvshinov has done a wonderful job with Motoko Kusanagi’s redesign but Yoko Kanno’s nowhere to be seen. The 3DCG animation could go either way. Right now there’s some pros and cons on the list, but I’m still cautiously optimistic. Aramaki and Kamiyama are each directing one season of the show so there are two chances for something special to come out of SAC_2045. While I don’t question the business motives for bringing back Stand Alone Complex, it’s a series fans have been clamoring for more for well over a decade. With the original director taking the reins, the potential’s there and even in the worst-case scenario, it won’t do us as dirty as Hollywood did.

Ghost In The Shell: SAC_2045 is set to premiere sometime next year exclusively on Netflix.