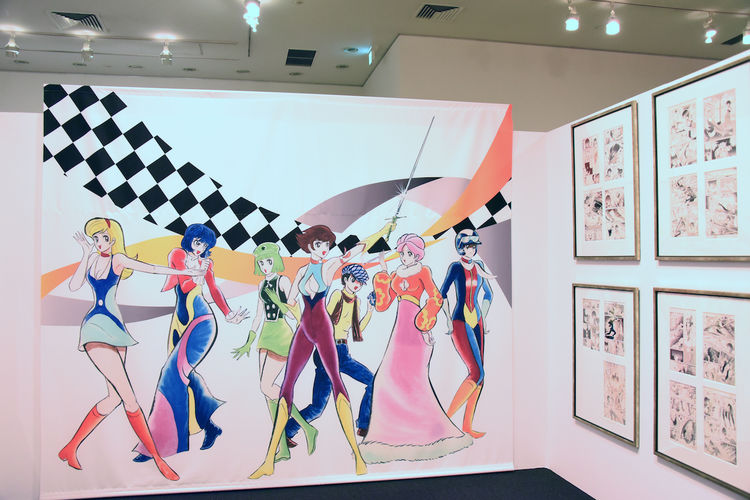 It feels like forever since the exhibition celebrating Go Nagai’s 50th anniversary as a creator was first announced, but now it’s finally landed in Tokyo – with a pretty high-profile release event to match the momentous occasion.

The exhibition had already opened previously in Osaka on September 8 (where Nagai ended up talking about his controversial series Harenchi Gakuen) as well as in Ichikawa (Nagai’s birthplace) on July 20. Even so, the Tokyo dates were always going to be the most important, as most people and news outlets have made their home in the metropolis.

Given this, Go Nagai, of course, made an appearance at the exhibition’s Tokyo venue, the Mori Arts Museum in Ueno, where he expressed his gratitude to the fans and the organizers of the event.

‘It makes me really happy to see so much of the work that I spent 50 years earnestly and single-mindedly creating displayed here. I always drew with all my might while thinking that I wanted to be remembered as a mangaka. If some of that was able to touch people’s hearts, even if just a little bit, then I’d be happy.’

It’d be an understatement to say that Nagai is being humble here – far from a ‘little bit,’ he’s arguably one of the most influential manga creators of all time with the reach to match, having pioneering the mecha genre with Mazinger Z, dark fantasy with Devilman and even the magical girl genre with Cutie Honey.

Speaking of the latter, Nagai also received a visit from gravure model Takasaki Kanami at the Tokyo exhibition’s opening event, which was a little embarrassing for the creator as she acted out the ‘Honey Flash’ transformation sequence in Cutie Honey cosplay and made heart signs at him. He was a good sport, though.

Anyway, now that the Go Nagai exhibition has finally opened in Tokyo, I’d imagine that more people than ever are gearing up to go visit – and, from the looks of things, it’s definitely worth checking out.

The Go Nagai exhibition gathers over 600 pieces of original artwork and manuscript pieces from across the whole of Nagai’s long 50 year career in Tokyo, while also separating them out into six distinct areas to avoid overwhelming visitors – something which other exhibitions have ended up doing in the past.

There’s also a recreation of Nagai’s workspace for fans to enjoy at the Tokyo exhibition, which even includes a recreation of the ‘L’Ordre des Arts et des Lettres’ award that Nagai received from the French government.

That award is pretty prestigious, only awarded to those who have made a ‘Significant contribution to the enrichment of the French cultural inheritance’ by the French government, but Nagai apparently didn’t even know how important it was until people around him told him about it. Once again, the creator’s humble nature shines through.

The Go Nagai 50th exhibition will run in Tokyo from September 14 to September 29. Details can be found via the official website.