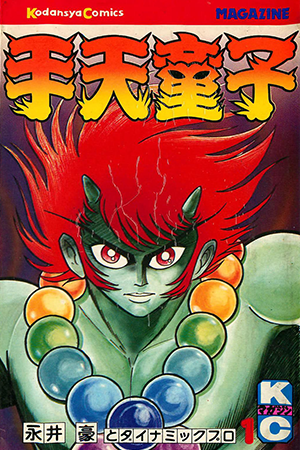 Go Nagai’s Shutendoji manga series was released in 1976 with an anime OVA adaptation in 1989. The manga is inspired by the folklore revolving around the legendary oni, Shuten-Doji. Nagai twisted the lore, added sci-fi elements, and created his own chilling re-telling.

Before looking at the anime, we need to know the lore. This legend dates back to the 10th century. Shuten Dōji is an oni, but he was born human and was smarter and more physically gifted than most people. He was rather rambunctious, and the people around him belittled him for it, so he grew cold and distant.

During a festival, Shuten-Dōji attended in a drunken stupor, donning an oni mask. He played pranks and had an overall good time until he had to take the mask off. The problem was that it was now stuck to his face.

In response, Shuten-Dōji fled to the Oeyama Mountain. He adjusted to life there, and he ended up collecting enough oni to have a gang, one of these oni, Ibaraki-dōji, became his right-hand man with him as their leader. The group would occasionally come down from the mountain and would kidnap or eat people alive.

The Emperor soon grew tired of these actions and created a demon hunter squad to kill Shuten-Dōji. On the way to the lair, the hunters met a group of Gods disguised as men who bestowed the hunters with gifts to slay the demons including a helmet and an oni killing poison.

Shortly after, the hunters were taken to Shuten-Dōji, and they ended up drinking sake, Shuten-Dōji’s favorite drink until the oni was completely drunk.

The group took their chance, put on their gear, and severed the demon’s head. The severed head launched itself at the warrior, but their gear protected them from danger. In the end, the warriors returned with Shuten-Dōji’s head.

What Does Nagai Do Differently?

Nagai takes elements of the tale of Shuten-Dōji, adds his own creative spin on it to create this alternate retelling of the legend with a more compassionate reincarnation of the protagonist. In his retelling, Shutendoji is a kind and virtuous man, but will not hesitate to slay an enemy. Since this Shutendoji is a sentimental protagonist, Nagai shapes the story into one that centers on maternal love.

In this series, Shutendoji is reborn as a baby. He is given to human parents by an Oni who promises to return for him in 15 years. They renamed him as Jiro Shuten, raised the boy as their own, and they grew to love him. Naturally, they wanted him to stay on Earth and prevent the Oni from coming.

Jiro Shuten grew up as a normal child, but he was still a demonic child as he was guarded by the spirit of an Oni that was often reflected in his shadow. When Jiro turned 15, he gained extreme strength and supernatural abilities. He also began developing his horns and having nightmares about the Oni as well. 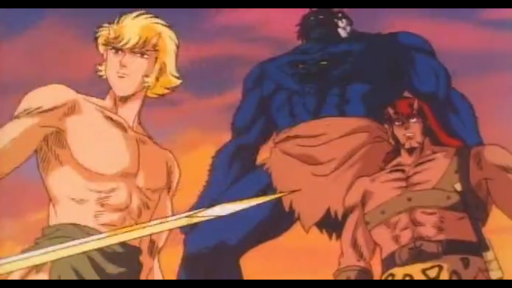 In the folklore, the Oni’s enemies are the group that murders him; in the anime, his main enemy is an Oni led cult that wants to take out Jiro so that their master can reign supreme. A branch of the cult led by Kaiser Mecha, an Oni who witnessed his father’s death at Shutendoji’s hands.

He modified his body for 100 years which eventually turned him into a cyborg for the chance to avenge his father’s death by slaying Jiro.

In the folklore, Shuten-Dōji’s allies are Oni he adopts into his group, but in the manga, they are his protectors. In his first battle against the cult, Jiro’s anger at the group for killing his teacher and taking his girlfriend hostage unlocks the seal of his powers and releases an Oni, Goki.

Goki was the Oni reflected as Jiro’s shadow throughout his life, and he openly continues his mission to care for and protect Jiro from harm.

After Goki’s manifestation, Jiro gains more allies. He meets a group who wants to help Jiro take down the Oni clan since it is their family’s duty to protect Shutendoji when the time comes. Other Oni who protect Jiro also enter the picture and assist him in his battles.

After a battle with the cult, Jiro is blasted about 100 years into the future. This is where he fights against Kaiser Mecha and ends up being sent back to the high point of Oni lore, the 10th century. Kaiser Mecha comes along with him but is swiftly taken care of by Shutendoji’s sword.

In the original tale, Shuten-Dōji’s mother abandons her son. In this tale, his mother is very much involved and is the reason why the events of the show take place. Jiro’s mother curses the Oni for taking her son, and her mental stability is compromised due to the trauma of Jiro being taken away.

At the end of the series, it’s revealed that his mother created the Oni race and their hell, where Jiro first appeared due to the wish that she and husband had to have a child. The Oni are the representation of her anger at the Oni for taking her son. She also ruthlessly killed Oni who hurt Jiro right before her eyes.

While she hated the Oni, she also created them and cared for them to an extent, especially those who she created to help Jiro on his quest. After the final showdown, the Oni world is destroyed, and they are doomed to extinction because Jiro’s mother’s anger no longer exists. Jiro, along with his family and his girlfriend, gets to live happy lives as full-fledged humans.