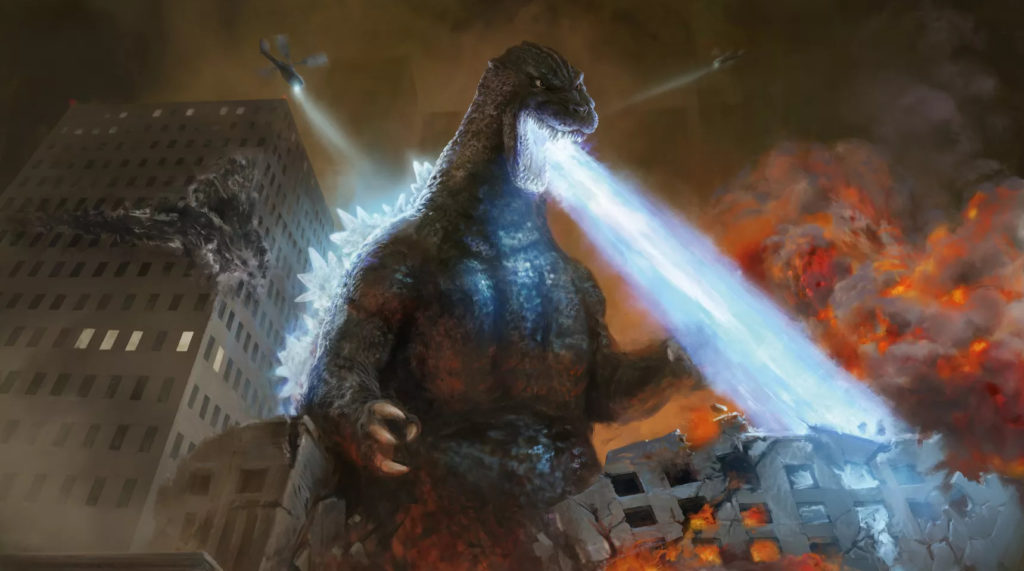 Wizards of the Coast has officially highlighted their next Magic: The Gathering Set due out on May 15th, 2020 worldwide. The set, titled Ikoria: Lair of Behemoths takes place on a world that’s entirely new to the long-standing strategy collectible card game. The focus on this set, and the main game mechanic, is built around the concept of giant monsters and in the set, Wizards looks east to the Kaiju of Toho’s legendary Godzilla: King of the Monsters series. Acting as alternate art versions of several of the original monsters featured in this new set will be a series of Godzilla themed cards that will be made available through a variety of different means. Functionally these cards are identical to their Magic original character counterparts, but the artwork and naming will call back to some of the most iconic Kaiju of all time. There will be 19 Godzilla series cards in all, with 3 of them being printed exclusively in Japanese. The cards that will be included are:

The cards will be available in both draft booster packs and collector’s packs of the Ikoria set, with 1 guaranteed Godzilla series card in draft packs and 2 guaranteed in collector’s packs. The cards will also be made available in Wizards of the Coast’s online Magic: The Gathering Arena client as a bonus card style when players purchase 6 booster pack bundles of Ikoria in the client. Magic The Gathering Online will also receive the cards, exclusively distributed through treasure chests in the game.

This collaboration marks the first time that Wizards has used a licensed property in a standard print consumer product. They have in the past featured characters from Hasbro owned properties like My Little Pony in special one-shot promo sets sold at conventions or for charity events. Hasbro is the parent company of Wizards of the coast though, so it’s not like they were really straying too far from home with those properties. For them to be reaching out to Toho and incorporating creatures that are the first thought for most people when you hear the words “giant monster” is rather groundbreaking for the nearly 30-year-old game. It’s also interesting to see them printing 3 cards in the series exclusively in Japanese, even though they’ll be available in packs worldwide. Last year for their War of the Spark set they tapped a number of Japanese fantasy artists, including famed illustrator Yoshitaka Amano, to re-imagine the iconic Planeswalkers from the game but those cards were Japan-exclusive and some now fetch very high prices in the aftermarket.

One card in the set has already seen a change that might end up driving its aftermarket prices up as well. “Spacegodzilla, Void Invader” will initially appear in packs with the very unfortunate title of “Spacegodzilla, Death Corona”. The Corona Beam is the official name of Godzilla’s iconic breath weapon, so when originally naming the card they wanted to show homage to it. Unfortunately, it went to print before the Coronavirus pandemic hit, and as such all of the first print run versions of the card will carry the original naming. Wizards has already released a statement saying that the name is to be changed in Magic The Gathering Online and Magic The Gathering: Arena, with subsequent reprints of the physical cards receiving the new name as well.

I used to be a rather avid Magic player myself, and its things like these that have had me dipping my toes back into the water when it comes to playing & collecting. I can’t really see myself diving back into the franchise full force as a result of it, but I’ll be damned if I’m not incredibly tempted to find my way into possession of a full set of these cards upon their release.