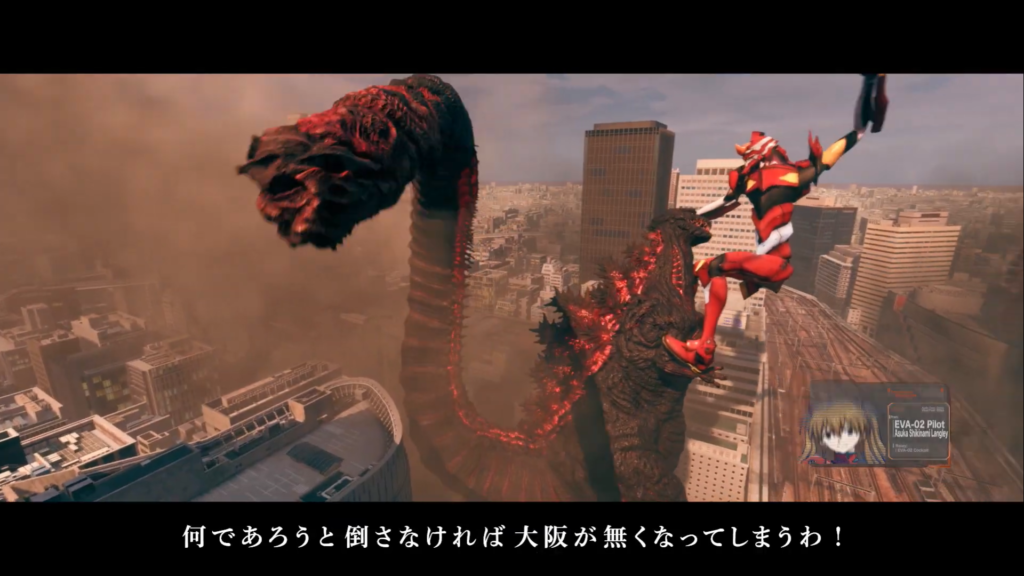 Yesterday, I was writing about Evangelion branded scissors. Today, I continue reporting on its on-going war with the King Of Monsters himself, Godzilla. As you might be aware, Evangelion and Godzilla have been doing various cross promotions for a number of years now. Neon Genesis Evangelion creator Hideaki Anno was tapped to create 2016’s excellent Shin Godzilla and since then the tie-ups have never stopped for too long. The ‘Godzilla vs Evangelion the Real 4-D’ attraction at Universal Studios Japan is looking like the most exciting thing to come out of this partnership, though. Here’s a preview.

‘Godzilla vs Evangelion the Real 4-D’ was detailed earlier this year, after a brief announcement in 2018, as part of an official Cool Japan initiative at Osaka’s famous USJ. You’ll be able to watch this video in full at the theme park. However, the attraction as a whole advertises a battle featuring ‘3D video’ and ‘special effects.’ It’ll launches May 31 so you’ll have the chance to go see the inherently creepy Shin Godzilla and some Evangelion units duke it out in Shin Osaka City 3 any time this summer. The exhibition will wrap up on August 25.

If you’re planning an Osaka trip, this may be worth your time. Universal Studios Japan regularly features all sorts of anime and games content you’d probably enjoy. Another big attraction this year is the ‘Attack On Titan: The Real’ which will feature original animation and detailed character statues and sets. Of course, One Piece has had a presence at the park for a long time and it’s returning this year for a brand new stage show. Even Detective Conan has joined the action for a staggering three separate exhibits. It’ll be like going to Six Flags but instead of Superman and Bugs Bunny, you can hang out with Shinji Ikari and the Colossal Titan.

‘Godzilla vs Evangelion the Real 4-D’ will hit Universal Studios Japan by the time you read this.