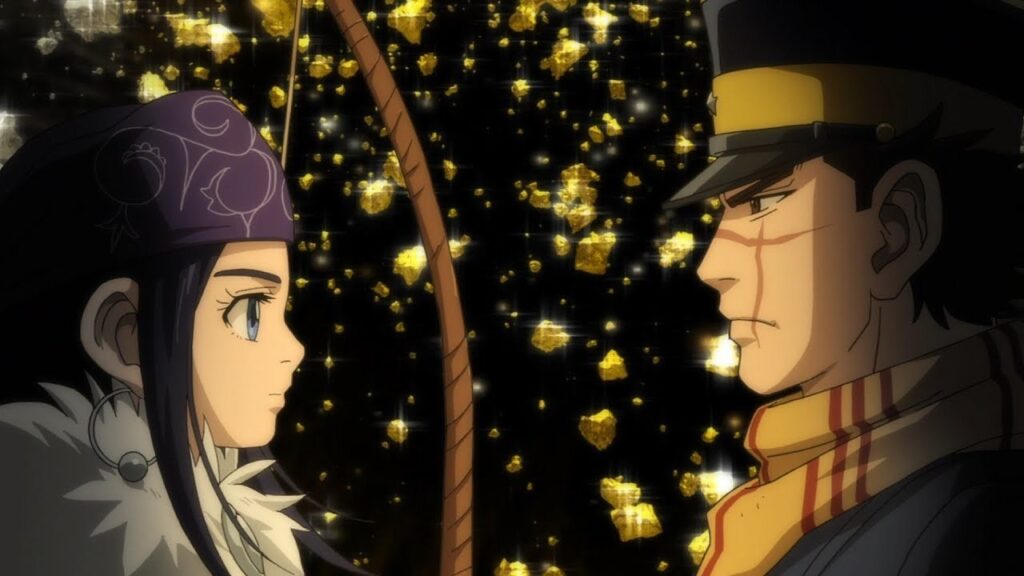 This anime series is a manga adaptation of the Golden Kamuy series written and illustrated by Satoru Noda.

The series started in 2018 and so far has 24 episodes over two seasons. Season three is anticipated to be released fall 2020. The story follows immortal Sacihi Sugimoto, who is a Japanese soldier that fought in the Battle of 203 Hill in the Russo Japanese War. He works as a miner in Hokkaido.

He has morals and strives to help support his friend’s family. One day while searching Hokkaido’s rivers for gold he overhears the story of stolen hidden gold from the Ainu (Hokkaido natives). He was caught and imprisoned, but tattooed a map for the treasure onto his cellmate. After hearing this story Sugimoto is motivated to find the tattooed prisoner. Along his journey, he meets Asirpa, who is a young girl with exquisite brains and they join their forces in search of this mysterious lost gold.

The Historic and Beautiful Setting

In the beautiful countryside town of Hokkaido, we get to experience its unique culture and food.

The Ainu had their own language and lifestyle and history of independence that enriches the viewing experience overall. For anime fans, this presents a really cool opportunity to learn something new in each episode about Japanese history.

However, at times perhaps the storyline is fast and takes time to assemble and process. The actual plot is engaging and with the influx of characters, there are various subplots and backstories that all total to an interesting world.

Characters are dynamic, like Sugimoto oscillates quite a bit from being docile to being a strong battle fighter. Asirpa’s femininity and representation is refreshing, especially for anime where girls are usually overly sexualized. Her character is rooted in her charm and intellect, she can be very relatable and inspiring to viewers.

Although this is a relatively recent anime, it is hard to tell from the quality at times. The animation and art were lacking, especially some of the CGI components, it felt unnecessary and rushed.

Animation art quality comes from methodological approaches and this feels like perhaps the staff didn’t have enough time to truly create and conceptualize cohesive and good art so instead 3D renderings were incorporated. However, this does not in the slightest come close to achieving the effect of hand-drawn animation. It is also apparent that sometimes the actual faces of the characters appear not very dynamic in their mobility.

Despite this, the background and culture stylization is great. Visually it is beautiful with Japanese print style drawings and intricate details from outfits to landscapes.

Although the music and sound that are incorporated into the anime fits quite nicely. The opening theme is enjoyable although it isn’t entirely in Japanese. And the voice acting is very well done and aligned.

The narrative trajectory of Golden Kamuy accomplishes a lot in 24 episodes. The story is enormous and captivating and it is paced with much momentum, but in a way that never really feels rushed and it shows in each episode.

The viewing experience is exciting, fast but never to a point where it is really confusing and it is hard to dictate what is happening. Perhaps the pacing hindered prospects for an additional season, but it didn’t hurt the anime as a whole.

The pacing is more than just entertaining, it is insightful as it gives the audience a tremendous amount of visibility and insight into the depth of each character, it makes for strong and impactful storytelling. They each have their significance and carry the center of the series in a commanding way that ushers in their narrative.

The series as a whole was extremely popular and could be considered a high literature story with an innate complexity and depth but with elements of pulp humor and goofiness. The character’s depiction and the unique storyline beg us to yearn for more and it compels us to keep watching to understand the characters.

This series is really defined and strengthened by its characters, they make a good show into an important and excellent one. There is a mass appeal and a dynamic shifting storyline that amasses both highbrow and lowbrow themes, while also within the modes of grace, violence, and entertainment.

It is surprising and impressive to see a show carry so many contradictions in a way that actually makes it stronger. In totality, the show stands as a pivotal example for genre-bending anime that divert and break the mold.

‘Golden Kamuy’ and ‘Spider-Man’ Team Up in Bizarre Collaboration