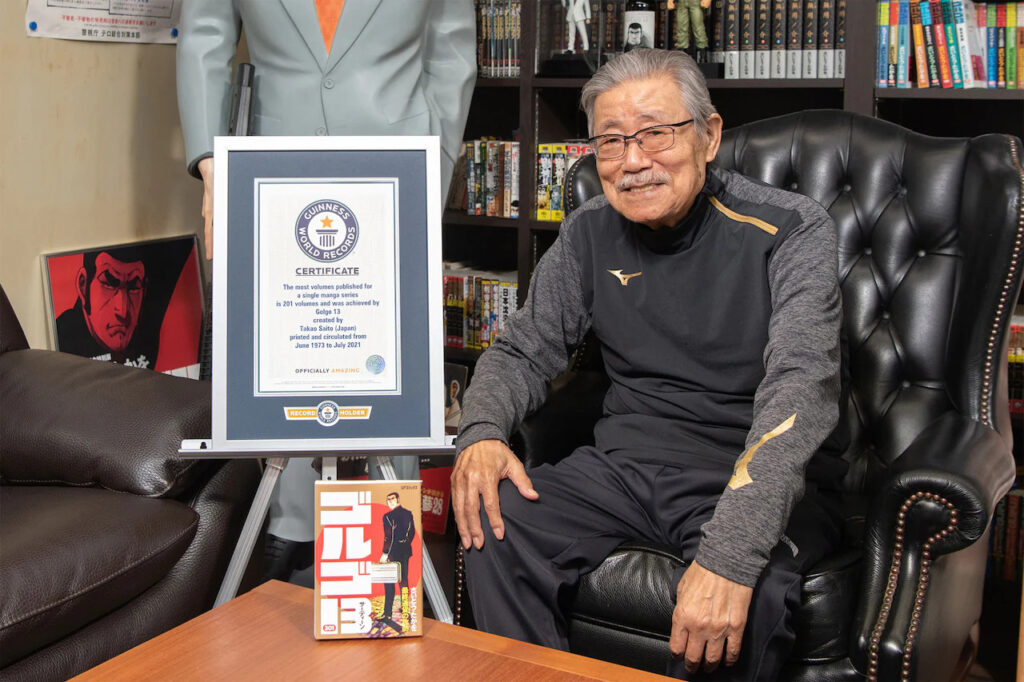 Golgo 13 has officially received the Guinness World Record for most volumes published in a single manga series, surpassing the previous record holder KochiKame.

Saito Takao began the series all the way back in 1968 for the fortnightly Big Comic, published by Shogakukan. He was always strongly influenced by the gekiga movement and saw Golgo 13 as one part of his attempts to bring its ideals to the mainstream, alongside establishing his own publications. Onihei Hankachou is another one of his long-running series, an adaptation of Shotaro Ikenami’s historical novels that also got an anime.

Very early on, Takao developed a cooperative method of production that arguably allowed Golgo 13 to run as long as it has and eventually take the Guinness World Record for most volumes published. Instead of coming up with stories himself, he draws chapters based on scripts provided by employees of his company Saito Productions: Kazuo Koike cut his teeth on this in the beginning, before going on to become a legend in his own right.

It’s not uncommon for Takao to simply ink the faces of the characters before calling it a day, which is again one of the reasons why the series has continued for so long. Volume 201 is what eventually tipped it over the edge and allowed Golgo 13 to take the Guinness World Record from KochiKame: Osamu Takimoto’s comedy series that ran in Weekly Shonen Jump from 1976 to 2016.

The road to volume 201 hasn’t been easy. Alongside the regular problems of production, the outbreak of the Coronavirus (COVID-19) last year disrupted work at the largely analogue Saito Productions greatly, causing the series to take its first ever hiatus. Nevertheless, it seemed almost inevitably that Golgo 13 would eventually take the Guinness World Record, given the pace at which it was proceeding.

Will Golgo 13 ever end? It seems impossible to imagine at the minute, but Takao has had an ending in mind ever since the very beginning. Big Comic also announced in 2015 that the series was moving ‘towards conclusion,’ so there’s that.

For now, Takao can enjoy celebrating his momentous achievement. Other mangaka, such as Rumiko Takahashi and Naoki Urasawa, also offered their congratulations on a special commemorative website.