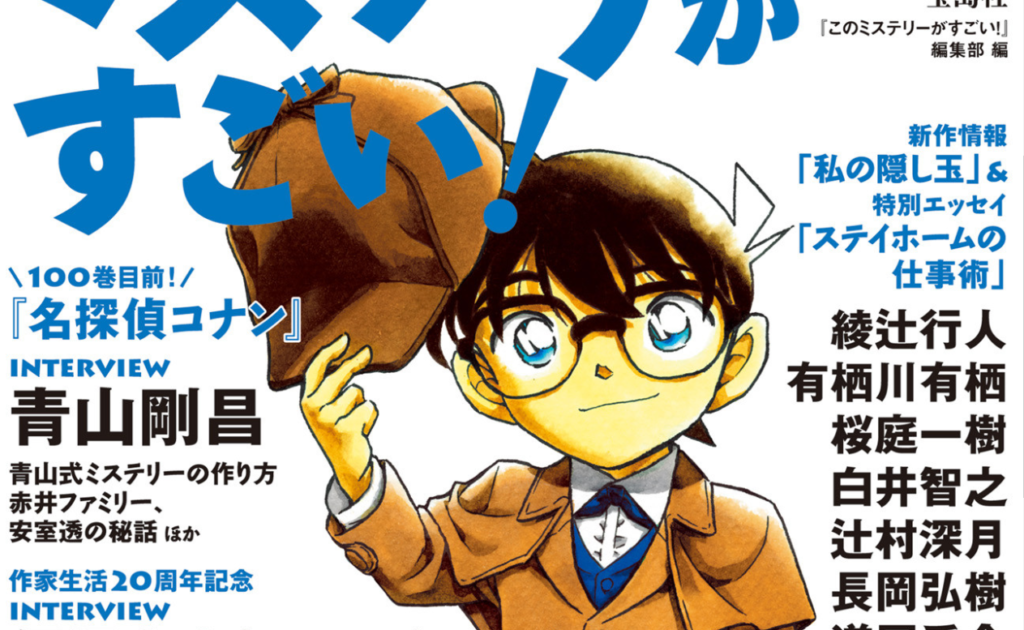 More or less every Wednesday for over twenty-six years, Gosho Aoyama has delivered to us a new Detective Conan mystery in the pages of Weekly Shonen Sunday. The fifty-seven-year-old author has been taking more time off for research as of late, but the series is still inching closer and closer towards to that elusive 1000 chapter mark. Volume 100 is also not far off on the horizon.

To celebrate the occasion, Gosho Aoyama sat down for an interview with Seiji Hibara in this year’s issue of Kono Mystery ga Sugoi!, an annual magazine published by Takarajimasha that looks back at the state of mystery storytelling across the whole year. Here, Aoyama revealed some surprising truths: how he puts together Detective Conan cases, his inspirations, and some of his favorite parts of the series. There’s even a tease for some upcoming Conan chapters and the next theatrical movie.

It may come as a surprise to learn that the author doesn’t plan out his Detective Conan mysteries beforehand. In the first part of the Gosho Aoyama interview, he starts off by declaring, ‘I don’t write plots. I don’t even take notes when I have discussions with my editors about twists. I also don’t even really think about how the story might develop. I just start to write it, and, if I think that there’s something wrong, I return to the beginning.’

Relating a funny story from when he was on the press tour for the movie Fist of Blue Sapphire, Aoyama said, ‘When I was asked before by an overseas fan in Singapore “How do you make mysteries?”, I replied “It’s a secret.” They said “Amazing!” (laughs)’ No doubt he felt a bit embarrassed about that one.

That’s not to say that no care and attention goes into the stories of Detective Conan. Far from it. Aoyama says that he thinks a lot about ‘tempo’ when it comes to writing the series’ mysteries, as they tend to only run for sixteen pages per issue. Furthermore, Aoyama states in the interview that what’s hard is not ‘twists or codewords,’ but ‘motivations.’ In his own words:

‘There’s an unlimited number of twists and codewords, but not motivations. I used the old “I was rejected by someone so I’ll kill them” at the beginning so I can’t use it anymore… That’s what I’m racking my brains over for hours in meetings every week.’

Research is also an important part of Aoyama’s method. He says that if he doesn’t ‘try out’ the murder methods that are present in the story in real life, then he ‘can’t write them properly.’ For example, he talks about the fake suicide in ‘The Betrayal’s Stage’ (volume 90): ‘we needed to figure out how high you could lift a person up from a stage, but when we tried it out, even the female editors were able to pull up an adult man. It was really quite strange.’

In this case, Aoyama was able to use his research to properly portray the twist. But it doesn’t always go so well. ‘The Burning Tent Murder Case’ in volume 93, for example, hinged on the culprit’s use of a rocker arm, so Aoyama and team attempted to replicate this with a ‘balancing toy.’ Only, it didn’t go very well. In the end, he thought ‘Oh well’ and ‘drew it anyway,’ but that proved difficult.

This portion of the Gosho Aoyama interview perhaps explains why the author has been taking more time off for research recently: to make sure that he can draw the series’ outlandish twists properly. In particular, he says that all the mysteries that will be included in the upcoming volume 100 are ones that he and his team have tried out, so it’ll be interesting to see if they are markedly better.

Part of Aoyama’s research process also involves consuming media with similar stories. The author admits later in the interview that he ‘doesn’t tend to go back and read old manga,’ so his inspiration mainly comes from watching ‘dramas or movies.’ In particular, Aoyama is a fan of Unnatural, penned by Akiko Nogi, as well as adaptations of classic mysteries, such as Murder on the Orient Express and Death on the Nile by Agatha Christie.

In the past, Aoyama said that he used to draw ‘quite a lot’ on Furuhata Ninzaburou, otherwise sometimes known as the ‘Japanese Columbo.’ He also readily admits that ‘Mystery Train’ from volume 78 is just a copy of Murder on the Orient Express, and likewise of Death on the Nile for ‘The Symphony Serial Murder Case’ in volume 23. At least he’s familiar with the classics.

One of Gosho Aoyama’s idiosyncrasies as a writer is his love for word games, often hiding the answer to a mystery in plain sight via a codeword. In the interview, he muses that this might be because he is originally from Tottori prefecture: ‘I often used the discoveries I made when I first moved to Tokyo as plot points,’ he explained. ‘I was surprised to learn, for example, that when people from Kanto say shoppai [salty], they don’t actually mean “spicy” like in Kansai – I thought that was interesting, and actually used it in one of the cases.’

Outside of mystery-related media, Aoyama is also an avid fan of such dramas as MIU4040 and Naoki Hanzawa, and manga like Chihayafuru, MIX, and One Punch Man. On the latter, he says that ‘The art is great, and the story is fun.’ No one can argue with that.

Not even Gosho Aoyama has missed out on the hype train surrounding Demon Slayer: Kimetsu no Yaiba. In the interview, he said that ‘I’m super scared of zombies, so Kimetsu was scary at first, but once I started watching, I got interested in what happens next…. Also, I liked your name. and Steins;Gate.’

Aoyama’s varied taste extends even further when he says that he draw on episode two of Neon Genesis Evangelion to craft the confession scene between Ran and Shinichi in ‘Holmes’ Revelation’ (volume 93): much like that episode, the story plays out of order and must be read from the end to grasp its true meaning.

Reflecting on 26 Years of Serialization

Detective Conan is often called a ‘mystery love comedy’ manga, so the pairings between the characters was also a hot topic of discussion. Obviously, Aoyama couldn’t pick a favorite, but he did say that ‘Everyone is different, everyone is good.’ A little bit of cop-out, but understandable.

More importantly, Aoyama was offered several occasions in the interview to reflect on the series and how his approach has changed over the years. In terms of his favorite mystery, he said that it was ‘The Mist Goblin Legend Murder Case’ from volume 11, as he asked his brother (who was working as a scientist at the time) to ‘calculate how much water pressure it would take to do the trick in real life.’ It definitely paid off.

The hardest thing about drawing over 100 volumes of mystery manga is, however, according to Aoyama, the clothes.

‘More so than twists, it’s the clothes. I think hard about the outfits for the culprit, Conan, and Ran, but I also have to think about all the other, inconsequential side characters that appear in the story. Drawing a long arc with lots of characters can be especially hard. In volume 23, we did the “Symphony Serial Murder Case” – lots of characters turned up. It was fun putting together the storyboards, but when I started to draw it, I was like “This is impossible!” (laughs) In the past, I used to just spend the whole week thinking about clothes. Nowadays, I just get friends to send me examples, and I pick from them.’

Aoyama has had plenty of time to think about what does and what doesn’t work in a mystery manga. He says that using ‘sound’ is a no-go, since ‘you can’t hear it in a manga,’ but when sound was added to ‘The Moonlight Sonata Murder Case’ in the anime, he was happy as ‘the second movement was supposed to be a little brighter and more uptempo when compared to the first.’ He also tries not to ‘do stuff with smells or color, since manga is printed in black and white.’

His approach to mysteries has also changed a little over the years. ‘I don’t do indiscriminate crimes anymore,’ he explained, ‘or anaphylactic shocks. Anyone could get their hands on peanut butter if it was used as a murder weapon, after all, and if they replicated in real life, they would have an excuse. I try not to draw those kinds of perfect crimes that you could get away with.’

On the whole, however, he’s still pretty much the same author he was back in 1994. The only thing that’s really different now is the fact that ‘some mysteries that I wrote in the past wouldn’t work because of the changing times: take Ai Habara’s first appearance with the answer machine, or the rewinding tape in the “Moonlight Sonata Murder Case”. Younger readers don’t even know what a cassette tape is anymore.’

Conan’s persistence despite the changing times is truly an incredible achievement and stands as a testament to Aoyama’s charismatic characters and the strength of his storytelling. It’s also a great source of comedy, as supposedly only a year has passed in-universe, but Conan and co. have somehow gained cellphones and home computers in the meantime.

We have no doubt that Conan will continue to exist long into the future. Rumors of a conclusion have been swirling for a while now, but Aoyama doesn’t appear to be in any rush to do it. Rather, he talks about wanting to do a case in ‘New York’ or a ‘proper Orient Express-style express train’ sometime in the future, so keep an eye out for that.

The Detective Conan movies have also become a significant part of the franchise in recent years. Since 2013, each new installment has continually beaten its own box office records, with The Crimson Bullet hopefully repeating that success when it launches on its own, new release date of 16 April 2021.

In terms of the next one, Aoyama says that the movies are decided two years in advance, so he already knows what the next story will be about. Obviously, he couldn’t divulge details, but he did say that ‘The thing that everyone wants to see will appear!’ The Black Organization, maybe?

Regardless, neither Detective Conan nor Gosho Aoyama seem to be slowing down any time soon. If anything, what this interview has revealed is just how much of a genius Aoyama really is, given that he’s able to pump out mysteries at such a consistent rate without any real planning. Doing something like that for over a quarter of a century is amazing, even if there have been some bumps along the way.

You can read the full Gosho Aoyama interview in the 2021 issue of Kono Mystery ga Sugoi!.