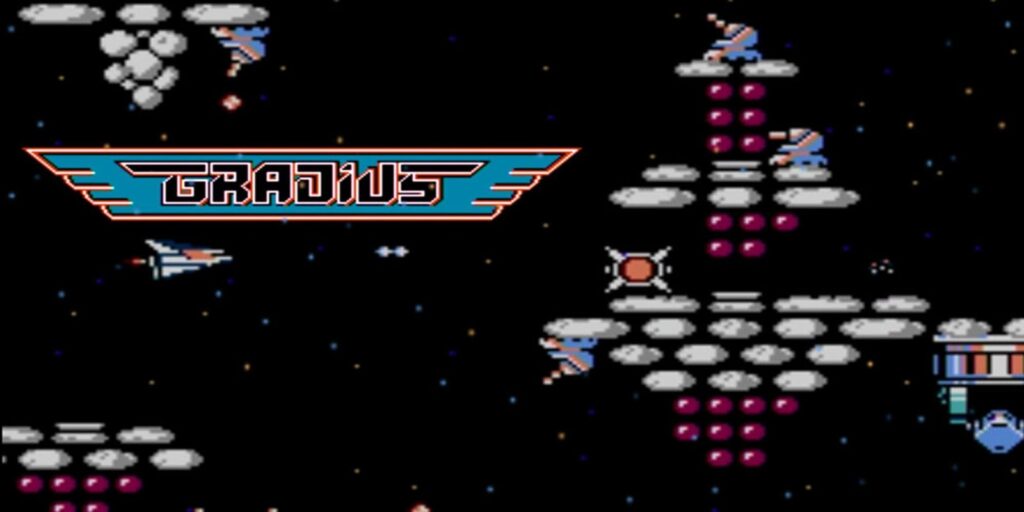 Sometimes also known as Nemesis outside of Japan, Gradius by Konami is one of the most classic, iconic, and influential series entries into the “shoot ‘em up” genre of video games.

Known for its availability in both arcades and home consoles, the introduction of the “power meter” for weapons selection, and introduction of the Konami Code, anyone who cares about gaming would be doing themselves a disservice to not know about Gradius.

Those unfamiliar with classic shooter games would be surprised to learn that one as retro as Gradius has an actual plot. It isn’t the central fun of the game, and it isn’t exactly extensive, but it is indeed there!

The beautiful, titular planet Gradius thrives in peace on the other side of the galaxy. But one day, they become the target of Bacterian and his empire. Gradius knows that a counter-attack on the enemy fortress Xaerous, despite their limited fighting resources, is their only way to survive. So they send out the Vic Viper, a hyper-space fighter ship that the player controls.

The Vic Viper takes off to go into the depths of space, fight level after level of enemies, defeat Bacterian, and save Gradius!

Gradius was originally released as an arcade game. However, it became popular enough that at least some versions of it also received ports to several home console systems.

Gradius was most notably ported to the NES/Famicom, but there were also versions released for the Sega Saturn, PlayStation, Commodore 64, ZX Spectrum, MSX, Master System, Sharp X68000, PC Engine, and eventually some mobile phones.

More recently, the NES version was re-released for the Virtual Console and NES Classic Edition, and the PC Engine version is on the PlayStation Network.

The Gradius franchise is vast, with a ton of games in the series. And many of them change names based on what region you’re in. We only go into detail about a few of them below, but this is a complete list of all of the Gradius-related games.

Gradius – The First One

The first Gradius was released in arcades in 1985. A horizontally scrolling “shoot ‘em up” game, it was influenced by one of Konami’s previous games, Scramble, the anime film Lensman, and Star Wars.

It was special because it was the first shooting game to have the “weapons bar.” Gameplay would involve enemies dropping weapons and power ups that the player ship could pick up to strengthen their attacks.

This power up system allowed the player to utilize more tactics in what weapons and power ups they used along with when they used them. It also allowed for freedom in weapon choices instead of being forced to use pre-determined power ups as was common in Gradius’s contemporaries in the genre.

When Gradius was released in Europe, it shot to number two in the UK sales charts, behind Feud. IGN has called it one of the greatest classic side-scroller shooting games, and GameSpot said that it was one of the toughest, only behind Contra.

The follow up to Gradius came out in 1988, and was originally released as an arcade game, just like its predecessor. It was extremely similar to Gradius, but it included some weapons configuration enhancements, and the inclusion of an all-boss “boss rush” level.

Gradius II did not receive a North American release when it debuted, though. In fact, it would take almost twenty years to reach North America; it finally arrived as part of the Gradius Collection for the PlayStation Portable in 2006. 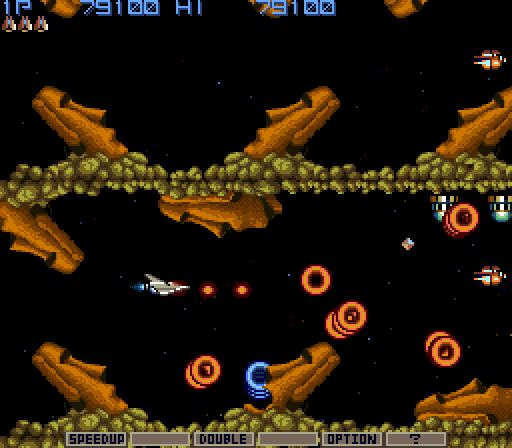 Several games later in the Gradius universe, Gradius III came out in 1989 and was notable for introducing Weapons Edit as a method of selecting weapons and power ups. It allowed players to create their own array of weapons from a limited pool of available weapon types.

Gradius III is also (in)famous for having an inaccurate SNES/SFC port. It had altered levels, enemies, and weapons. Two entire stages are even cut out entirely. And the final boss battle is totally different. But the SNES port did introduce the Rotate and Formation Option types, which would later be recycled for Gradius V.

Entertainment Weekly gave Gradius III a C, saying it was too similar to previous Gradius games to be worth the $50 it cost. But IGN and GameSpot gave it an 8.5 and 7 out of 10, respectively, despite criticizing the high difficulty level of the game.

Gradius III would be the last Gradius arcade game for roughly a decade.

Gradius IV was released in 1999 in Japanese arcades. It was also called Gradius Fukkatsu or Gradius Revival due to the long period of time between it and its predecessor.

The core gameplay remained the same, but this version included upgraded graphics, a slew of new weaponry, and the erasure of the Weapons Edit feature from Gradius III.

Reviews at the time were generally positive for its graphics and colorful backgrounds, but as time went on, retrospectives liked it less and less. By the time of Hardcore Gaming 101’s Gradius retrospective in 2017, they said it was more like a “best of” the previous Gradius games, saying that it’s not terrible, but it is “redundant.”

Released in 2004 for the PlayStation 2, Gradius V was the last truly new game in the Gradius series, although the name is used for Gradius ReBirth, which is considered more of a remix of previous games. Gradius V is fully rendered in 3D, although the gameplay is still primarily in 2D.

Gradius V was developed by Treasure, which is also known for titles like Ikaruga, Gunstar Heroes, Guardian Heroes, and Radiant Silvergun. They dispensed with many of the Gradius series traditions – for instance, there is no Moai stage – but they greatly expanded the option controls.

According to Metacritic, Gradius V received “generally favorable reviews” with an aggregate score of 82/100. It was praised for its “old school” appeal, intricate level design, and visual, graphic excellence. But critics also pointed out the extremely high difficulty level again, along with its reliance on genre conventions.

Considering how uniform many side-scrolling shoot ‘em up games can be, Gradius had to establish a few in-series traditions to stand out. Some of them are:

Gradius, the NES, and the Konami Code

Although it isn’t present in the arcade version, the now-famous Konami Code appears for the first time in the NES port of Gradius.

The Konami Code is activated in some games developed by Konami by pausing the game and then entering the code (up, up, down, down, left, right, left, right, B, A) into the controller. It’s known as the ultimate cheat code in Konami video games.

In Gradius for the NES, the Konami Code would give the player ship most of the available power ups, aside from Laser, Double, and Speed Up.

It’s difficult to think about classic games of the 1980s without thinking of Gradius. Fun, challenging, and perfectly retro, it’s enjoyable anytime ported onto any modern device!