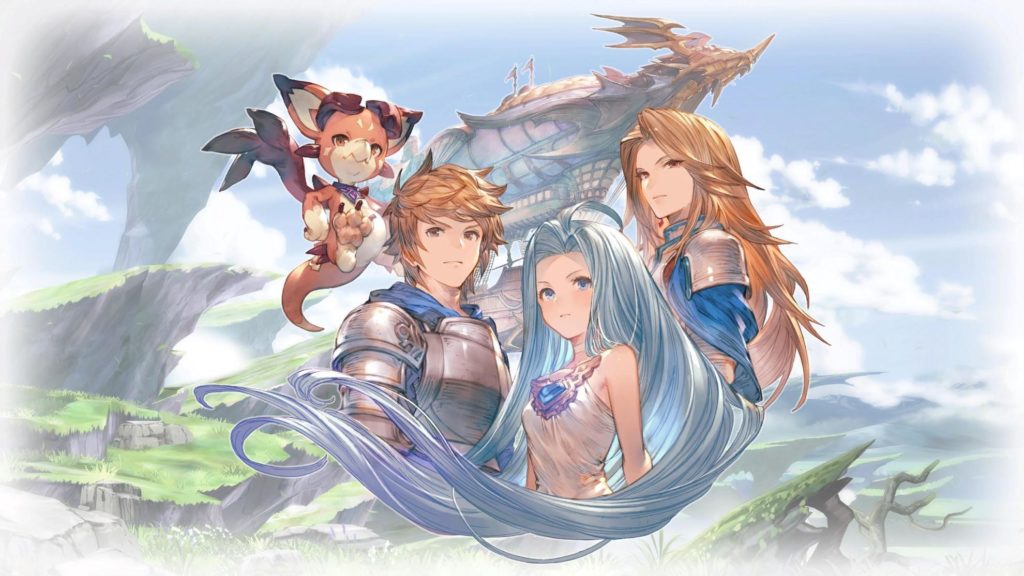 Granblue Fantasy was released in 2014 on the web, iOS, and Android platforms by Cygames. Granblue Fantasy is a role-playing game much akin to Final Fantasy where players take turns with enemies attacking each other for supremacy.

The game features music from Final Fantasy legend Nobuo Uematsu as well as art from also Final Fantasy legend Hideo Minaba. The game plays like your typical role-playing game with turn-based battles. Players will level up and become stronger as they progress through the game.

What makes Granblue Fantasy unique is that players get crystal fragments which can be purchased with in-game currency to get special weapons which add specific characters to your party.

Upon the first launch, the player is encouraged to log into a Mobage account so that they can save their progress on their servers. Once registered and logged in, they are prompted to choose a male or female protagonist (Gran or Djeeta by default). After this has been completed, the game officially begins. The game opens with the protagonist and their companion just relaxing on a beautiful day when they spot an Erste airship in the sky.

The Captain of said airship suffers a fatal wound during a battle while trying to rescue Lyria. Lyria has no choice but to bond her soul with him to save his life. Upon doing this, she then pushes the Empire Forces back by summoning the mighty beast, Proto-Bahamut. (I promise this isn’t Final Fantasy.) Because Lyria and the Captain’s fates are now entwined, they set on a journey to find out more information about the Gran’s father. 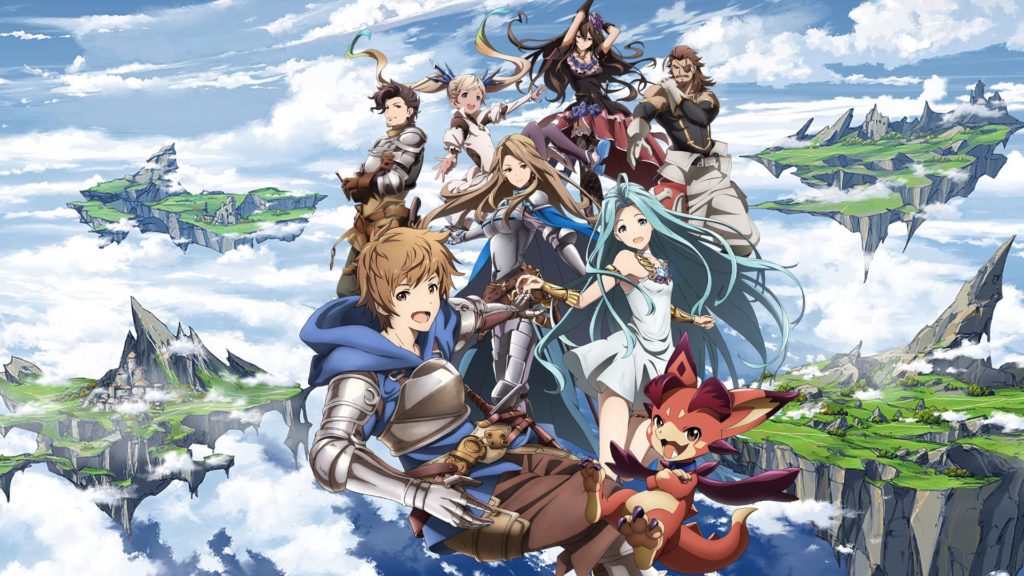 The animated series of Granblue Fantasy follows pretty much the same story as the mobile game. The synopsis of the anime provided by Cygames reads:

“In order to escape from the Empire, Gran and Lyria head out into the vast skies, holding the letter Gran’s father left behind – which said, “I will be waiting at Estalucia, Island of the Astrals.”

Granblue Fantasy The Animation made its debut on January 21st, 2017, with a second season, which started airing on October 4th, 2019. The series is distributed in the United States by Aniplex of America. So you can easily find the Blu-ray discs of the series should you be interested in owning it.

You can also stream Granblue Fantasy The Animation on Crunchyroll. Either way, it’s incredibly accessible to a large portion of the world. 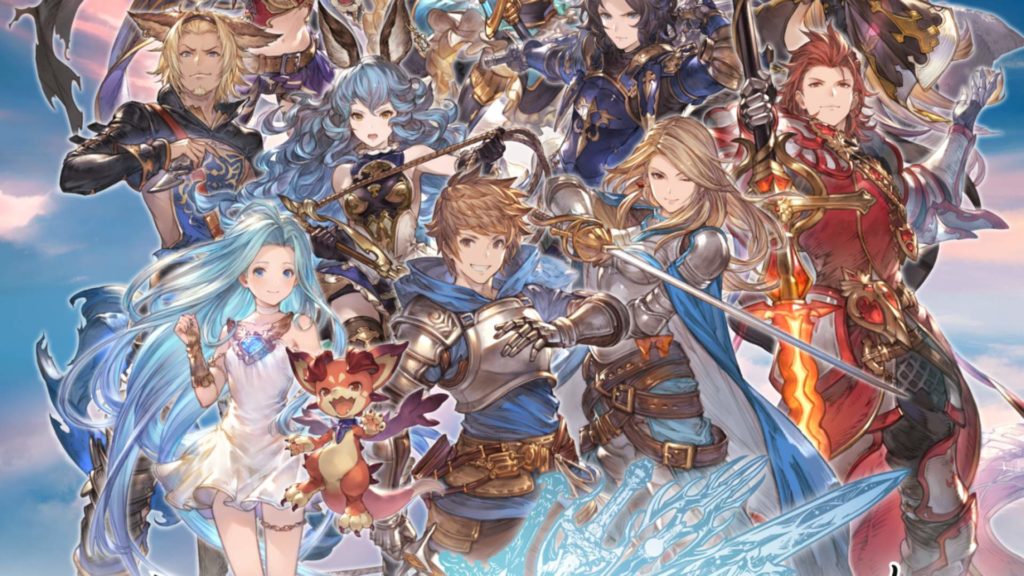 The Characters of the Granblue Fantasy Universe

With Granblue Fantasy being a colossal title spread across a vast array of media, it’s only fitting to have a massive cast of characters that players and viewers can attach and relate to. These characters are:

Initially, Gran had aspirations to be a skyfarer like his pops. He ultimately saves Lyria but is severely injured in the process. This event starts their journey together to find out more about his father.

A girl who has the ability to connect with Primal Beasts through her powers.

A creature who resembles a lizard but swears up and down that he is a dragon. He follows Gran wherever he goes and has an obsession with apples.

A former lieutenant of the Empire, she helps Lyria escape from her prison cell and, ultimately, the Empire as a whole, causing her to be labeled as a traitor.

Rackam is an airship pilot who is stranded in Port Breeze, looking over his ship.

Rosetta is a woman from the Lumacie area who is far wiser than she portrays.

Sierokarte is the owner of the Knickknack Shack, who tends to be able to bail our travelers out of tight spots, may it be with information or wares.

One of the Empire’s soldiers who works with Drang hunting down Lyria.

Another one of the Empire’s soldiers who works with Sturm hunting down Lyria.

A young mage who is studying to become a healer. 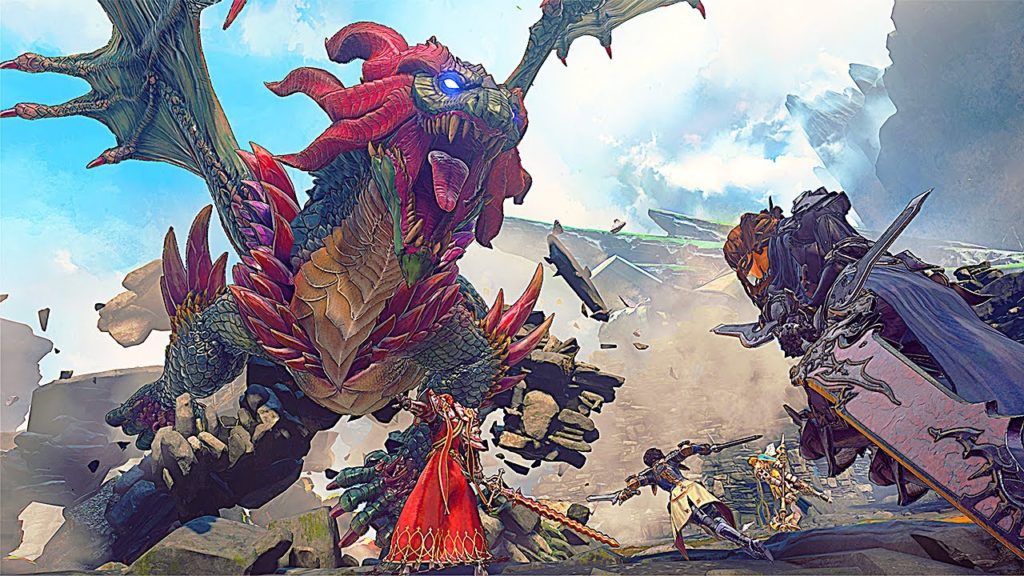 In 2016 Cygames announced that they would be bringing the Granblue Fantasy series to home consoles. The first game in the series is Granblue Fantasy Versus, a 2.5D fighting game which is developed by Arc System Works for the PlayStation 4.

The fighting portion of the game is very similar to any other Arc System Works fighting game such as Guilty Gear, BlazBlue, or DragonBall FighterZ. Extremely well drawn and animated 2D characters animated in a 3D space give the game a very high visual fidelity, which rivals actual anime series.

What stands out about Granblue Fantasy Versus is its single-player story mode. Rather than just having the player fight through the various characters in the game and learn about a backstory, there is a side-scrolling beat-em-up RPG game that players can use to progress through the story of each character. Currently, it is a single-player mode, but it is slated to get co-op functionality along with exclusive bosses and minions to battle and weapon grids.

Next is the massive Granblue Fantasy: Relink, An open-world RPG set in the universe of Granblue Fantasy, albeit a different realm from the one that players have come to love. Also announced in 2016, it is a project between Cygames and Platinum Games. The game can have up to 4 player co-op play or single-player utilizing three computer-controlled players.

The game hasn’t been the recipient of a smooth development cycle. However, as in February of 2019, Platinum Games announced that they would be withdrawing from the project, leaving the remainder of the programming and development to Cygames exclusively.

Lastly, there is also a Granblue Fantasy light novel, which spans four books, which also contained game codes for unique items in the game that you were rewarded with for purchasing the book. These codes were also available in the digital versions of the books as well.

The Adventure Goes On

Granblue Fantasy as a franchise is still in its infancy, which ensures that there is sure to be a large amount of content still to come. The charm of having a title that is based on a role-playing game is that the possibilities are endless, and you can necessarily take the franchise in any direction that you want. It will be exciting to see where Cygames takes the Granblue Fantasy franchise next.