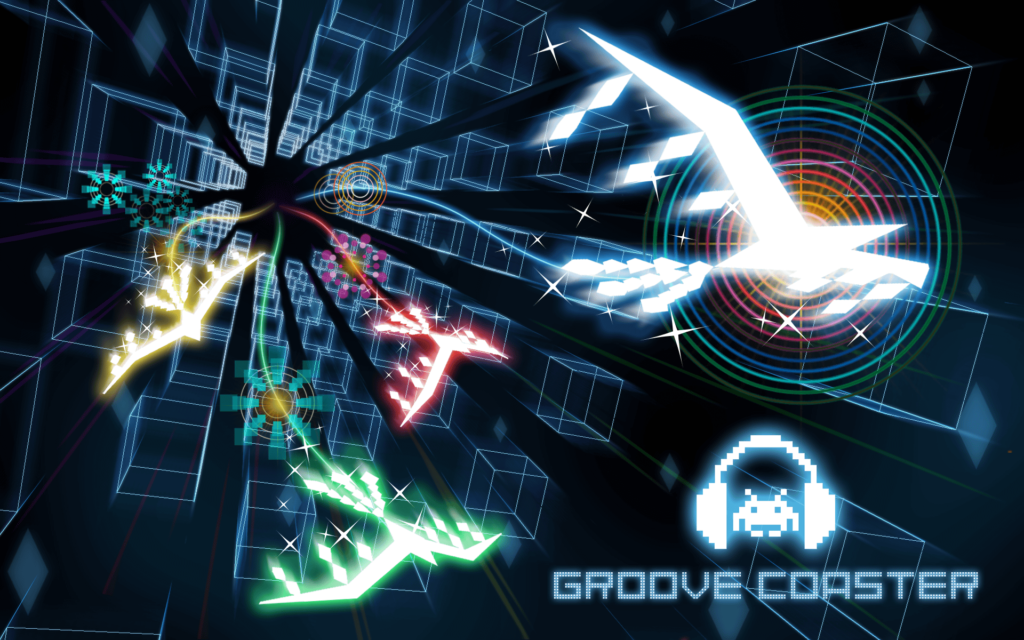 When you’re a company that is primarily known for making cutesy and not so hardcore arcade games, what do you do when you have to innovate and make something new to appeal to the masses? Taito Corporation was faced with this exact issue.

They took their ideas to the drawing board and came up with a fantastic idea. They said, “let’s make a music game, but use the Space Invaders mascot and make it like you’re on a roller coaster”! And thus, Groove Coaster was born.

To this day, there are 12 iterations of Groove Coaster. Not much differs from them in gameplay aside from the original tracks. However, there are many quality of life improvements as well as other small system changes that have happened along the way.

Groove Coaster initially started as an iOS and Android mobile game which then gained popularity and had an arcade version made. Since then the game has made the migration from the arcade and mobile to Steam and the Nintendo Switch. The iterations of the title are:

The mobile versions of Groove Coaster utilized the devices’ touch screen and had tap notes, hold notes, scratch notes, and flick notes. The arcade version is a bit more advanced as it uses two control interfaces on the front of the machine which can be moved in diagonals as well as have a button on top for tap notes.

Furthermore, the arcade version of the game has NESiCA functionality where users can purchase a NESiCA card to create a profile and save their scores as well as unlock content to be used or played in the game.

For the various home ports of the game, players are limited with the ability to be able to have the “arcade mode” experience of the game as there is no official controller for Groove Coaster which has been released. There are 3rd party companies such as YuanCon who sell a Groove Coaster controller with fairly good quality as well as reviews.

Keep in mind that these controllers are not friendly on the wallet however as they can run multiple hundreds of dollars.

Groove Coaster is one of those games where you honestly can pick up and play with a fair amount of ease. There isn’t some super steep learning curve a la beatmania IIDX and the music list offers something for everyone.

Not to mention, it’s probably the most easily accessible music game on the market. I can confidently say that most people reading this have a smartphone at some level and if not you either have a PC or a Nintendo Switch. You don’t need to have access to an arcade to have the Groove Coaster experience.

For the Switch version of the game, they are constantly adding DLC content at a fair price for what you get. Currently, they offer a total of 6 DLC packs available each with 10 new songs for the game, as well as some other goodies like additional navigators and navigator voices.

There can be many things said about the Groove Coaster series. I’ll be the first one to tell you that it’s not for everyone. But that doesn’t mean that there isn’t something for everyone.

Where you may dislike the game as a whole, there may be aspects of it which you really enjoy. This is the boat that I am in.

Well, I don’t dislike the game, but I’m notoriously bad at it thus resulting in my distaste for the game. This doesn’t make the game bad in any way, shape, or form. I would strongly encourage anyone that has essentially any electronic device to try Groove Coaster out.

As I mentioned previously, the game has a soundtrack which is phenomenal and really has something for everyone. From video game soundtrack music to J-POP to hard-hitting originals, there really is an endless possibility of songs to sink your teeth into. Clearly, Taito is doing something right if there are already 12 different, individual iterations of the game and they don’t seem to be slowing down at all anytime soon.

So just like the navigator in the game says, “Let’s Groooooooove Coaster”!