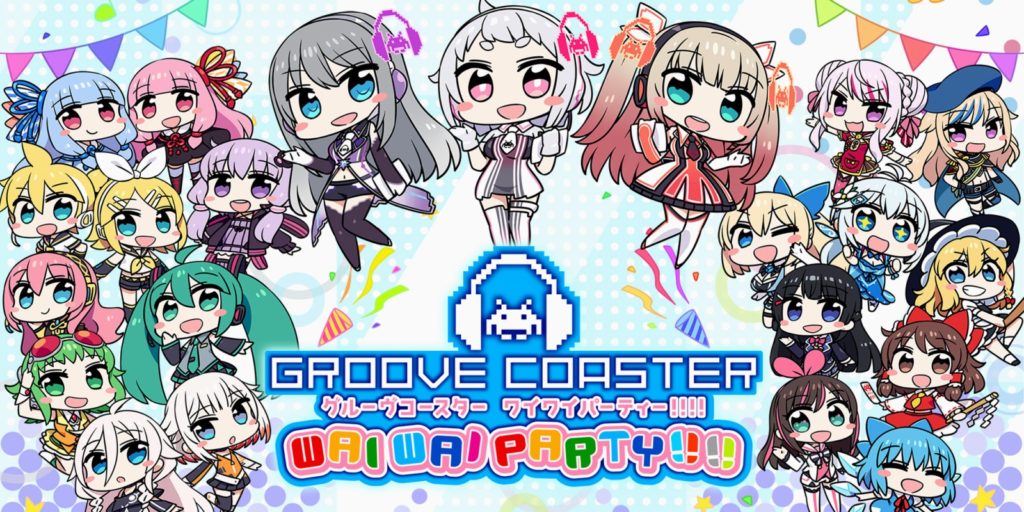 Considering how much of an impact it had on the rhythm game arcade scene within Japan and how much the game is associated with arcades, it’s easy to forget the Groove Coaster franchise’s roots lie on mobile devices, its first game launching on iOS and Android in 2011. While it lags behind the popularity of titles such as Beatmania, Taiko no Tatsujin or newer arcade hits such as WACCA, the series is one of the quintessential rhythm arcade games of the genre in Japan, and in spite of its origins is more widely associated with the rhythm arcade scene. The most recent entry into the TAITO-developed series, the Nintendo Switch digital-only release of Groove Coaster Wai Wai Party, is in many ways a sign of the franchise both returning to its roots and embracing a new future as it adapts to the modern rhythm gaming landscape.

With the Nintendo Switch debut for the Groove Coaster series, the influence of rhythm games with virtual idols like [email protected], Love Live and BanG Dream, plus the meteoric rise of virtual YouTubers, is blatantly obvious in the prominent place virtual artists hold within the game’s visual aesthetic, music and promotional material. Refining the tried-and-tested formula of the franchise, adding a pinch of virtual idols and seasoning the experience with both a Nintendo Switch and English-language release worldwide, this title, alongside last year’s PC release, is an example of TAITO reaching out to new audiences with the Groove Coaster franchise. Can Wai Wai Party succeed at bringing in new audiences, and can Groove Coaster’s Nintendo Switch debut prove to be an enjoyable experience for experienced players and newcomers alike?

Rhythm Gaming on the Go

The core gameplay which has driven the Groove Coaster franchise since its debut remains unchanged for this Nintendo Switch release. Players press buttons in time to the music as their avatar moves over them, with correct timing being required to score maximum points. Any button on the controller can be pressed to register the note, with the exception of certain notes requiring joystick movements in the requested direction. This freedom not only allows the ability for players to embrace the music and express themselves but allows for some complex sequences on the game’s hardest difficulties. Further augmenting difficulty are ad-lib notes, notes hidden from the player that won’t interrupt combos but can add to their score and are required in order to maximize their final score.

Accompanying these songs are visual spectacles adding life to the music being performed. The meshing together of this rollercoaster track of musical notes and visual effects makes it difficult not to engross yourself into the music. It’s a flashy musical gaming experience that the series has always enjoyed throughout its life, replicated in its entirety on a new platform. With the ability to play portably or on the TV and in either horizontal or vertical orientations via a mode that more closely replicates the original experience, you also have a variety of playstyles on offer.

However, Groove Coaster on Nintendo Switch isn’t without its problems, some of which have plagued the series ever since its inception. While mixing an intense visual experience customized to each song is welcome in places, in others it can act as an impediment to gameplay, particularly on the smaller portable screen. In some songs, the visual effects of abstract vector images, 3D models, music videos and more can make it difficult to keep track of notes you’re supposed to be playing, and there have been occasions where I’ve dropped a combo while playing on harder difficulties for this reason alone. 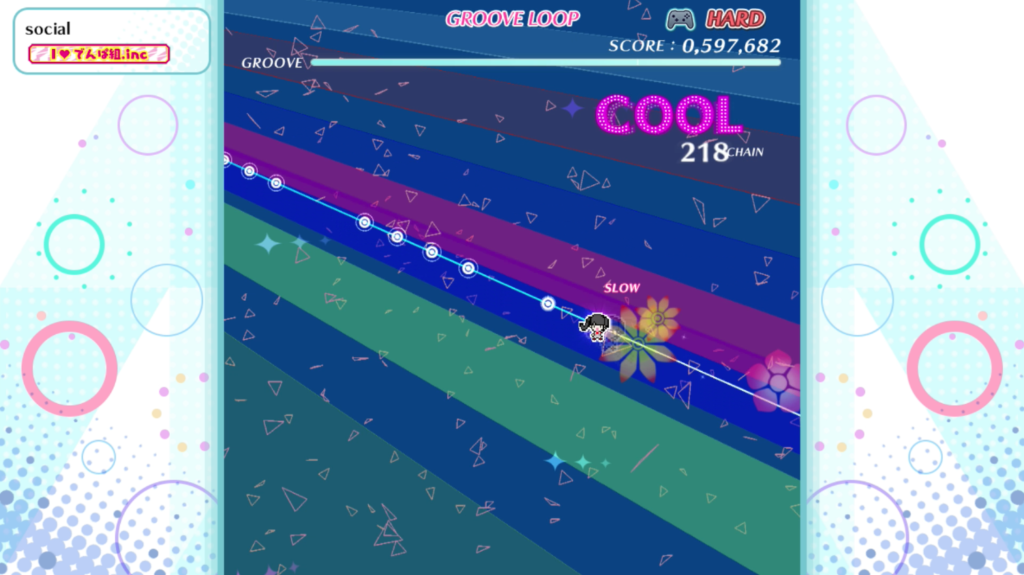 Playing with something like a pro controller is definitely preferable to the joy-cons as well, as it can feel rather cramped on higher difficulties when you have to quickly switch between different types of button presses. While not too much of an issue for me due to having a stand to place my Switch on when playing portably if I want, it can make it a bit more difficult to play the game when away from the TV.

As a whole though, the gameplay is as fun and addictive as it’s ever been, the transition perfectly replicating the iconic experience expected from the series, warts and all.

The bigger question comes from a musical perspective. On the surface, the number of songs playable out of the box is an ample and varied selection, with more music unlockable as you progress through the game. This includes popular J-pop and anime songs, including cover versions of Evangelion’s Cruel Angel’s Theses and Genesis of Aquarion to Kemono Friends’ endlessly catchy opening theme. On top of that a large selection of Vocaloid, gaming and Touhou music is on offer, much of it possibly being unfamiliar to Western audiences yet a welcome inclusion nonetheless, their inclusion coming with the added bonus of allowing players to discover a wide range of unique and interesting doujin artists. 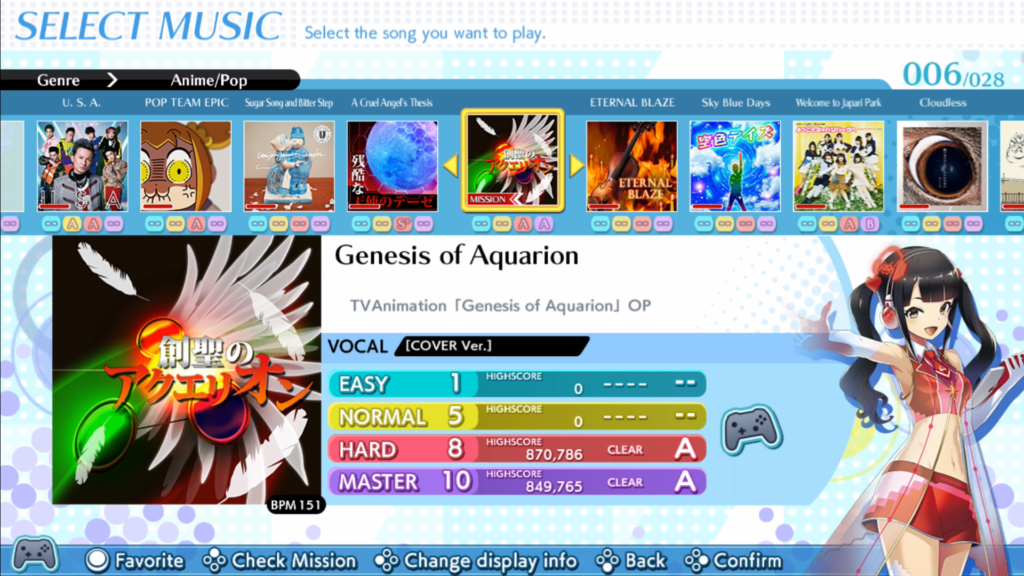 Linking to Groove Coaster Wai Wai Party’s virtual YouTuber credentials, this song list is also expanded through the inclusion of older music from Kizuna AI alongside newly-recorded music featuring other creators. These songs vary in quality, with a catchy theme song in GROOVE LOOP by DECO*27 and Kimi no Starlight Road by SEINE being personal highlights for me.

The issue for me is more when it comes to looking at this game as a value proposition in comparison to the other options available. Groove Coaster on Nintendo Switch is a digital-only title retailing on the UK eShop at £50 with roughly 60 songs available immediately and more unlockable over the course of many hours of gameplay. While certainly a respectable amount, the question of whether this number offers value for money for the consumer is a valid one when the game is compared to the competition. Ever since the console’s launch in 2017 I’ve been a major proponent for the Nintendo Switch version of RAYARK’s VOEZ, a port of the mobile game including all songs from that game. At the time the game already included over 100 songs, with multiple patches in the years which followed (with regular free updates adding new music still occurring even today) bringing the game’s total music up to over 150. Not only that, VOEZ is available for a much lower price at just £22. On the other hand, the missions the game offers gives players more incentive to keep playing, something VOEZ can lack in the long term if you’re less motivated about reaching a perfect score in any particular song. 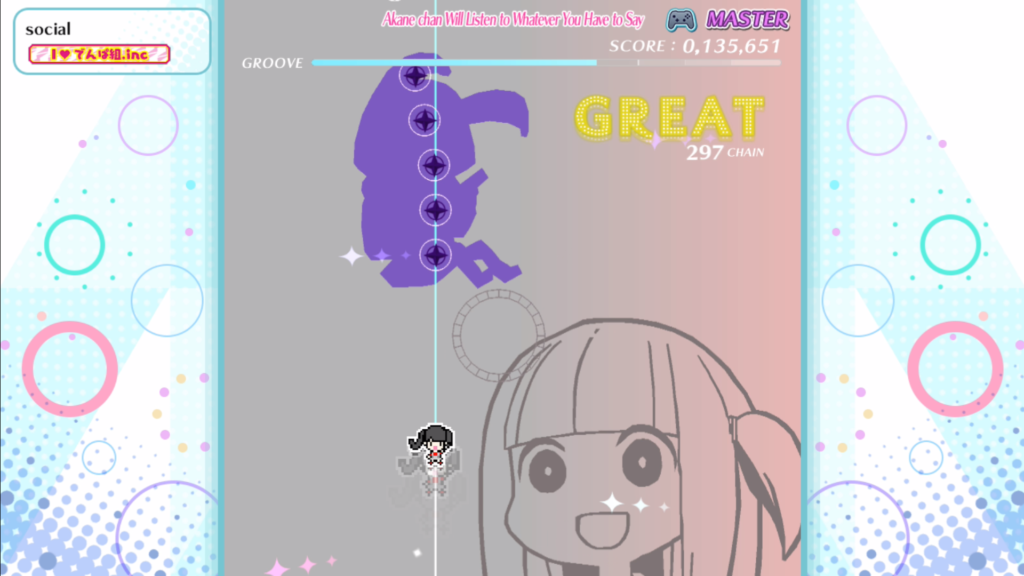 Further additions to Groove Coaster’s musical roster come in the form of paid DLC, with multiple packs each retailing at £13 which add 10 songs each. These packs are all themed, with Vocaloid, Touhou and Undertale packs currently available alongside a pack of 10 songs by Japanese idol group Denpagumi inc. As a major fan of the group, I picked up this latter set, which also adds avatars and other customization options related to the group. While I saw value in this because of my enjoyment of the group’s music, this only raises the price of the game further. A single DLC pack alongside the base game already takes the price of Groove Coaster over £60, and though there’s a large roster of songs included in that price, whether that’s enough when there’s other, arguably better-value, alternatives available is something worth considering.

That being said, Groove Coaster Wai Wai Party on Nintendo Switch is an enjoyable, faithful, if expensive recreation of the Groove Coaster experience onto Nintendo platforms. The price may be understandably off-putting to some with the large proportion of Touhou and Vocaloid music being less recognizable to international audiences, however, the fun and addicting gameplay the series is known for importantly remains intact. Even with less recognizable music on offer, there’s not a single bad song within the game’s repertoire, the challenge on offer being something that will ensure you come back to improve your best scores for hours and hours to come. 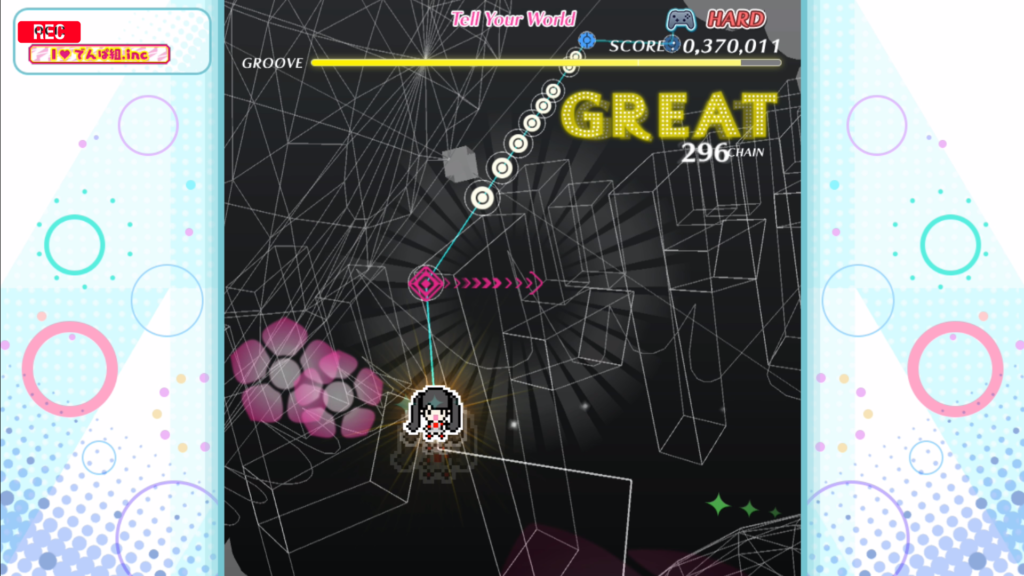 While issues with the intense visual effects impeding gameplay on the smaller screen can frustrate at times, this is a small blemish on an otherwise impressive addition to the already vast selection of rhythm games on offer for Nintendo Switch. On the whole, if you can afford it, adding this rhythm game to your Nintendo Switch library is one decision you won’t regret.