Who is Guido Mista and Does He Have Hair?! 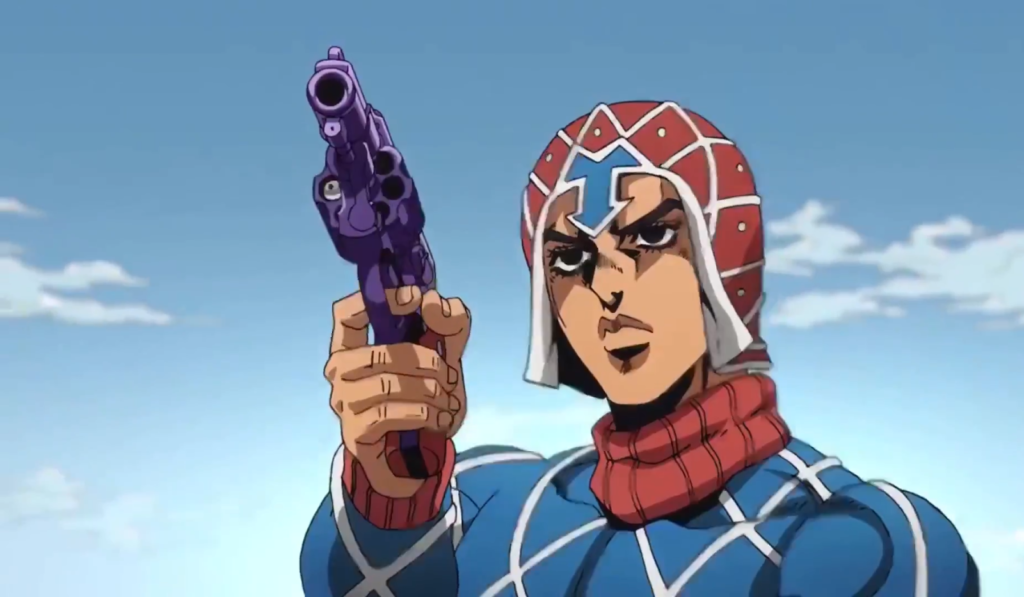 For those who may not know, Guido Mista is one of the main characters in Part 5 of Jojo’s Bizarre Adventure: Vento Aureo, or how it’s more popularly known, Golden Wind. Mista is a member of the gang, Passione, and is a part of Bucciarati’s gang as their resident gunslinger.

When we think of mafia members, they’re usually painted in a really bad light. However, the members of Bucciarati’s gang are good people…for the most part. Prior to the start of the series, Mista was an ordinary kid who enjoyed the simpler things in life.

Since he was poor, he would beat up passing people who insulted his favorite movie stars for their money. If he was caught, he’d spend time in jail. However, he would never beat up someone who didn’t have it coming.

One night, Mista witnessed a man beating up a woman, and he went over to help her. Mista proceeded to beat the man up, and he shot at him. Mista dodged the bullets with ease and was able to shoot at the man with ease. However, when the police filed the report, no one believed that anyone could easily dodge bullets.

This resulted in Mista getting a 15-30 year sentence for his “crime”. Bucciarati heard about the incident, got Mista out of jail, and recruited him to be a part of his team. Mista was also granted a stand when he passed the test to join Passione.

Stands are manifestations of the user’s life energy.  In this case, Mista’s life energy is depicted through his stand, Sex Pistols or Six Pistols if we’re avoiding copyright infringements. With Sex Pistols, Mista’s gunslinger skills rise to godly levels. 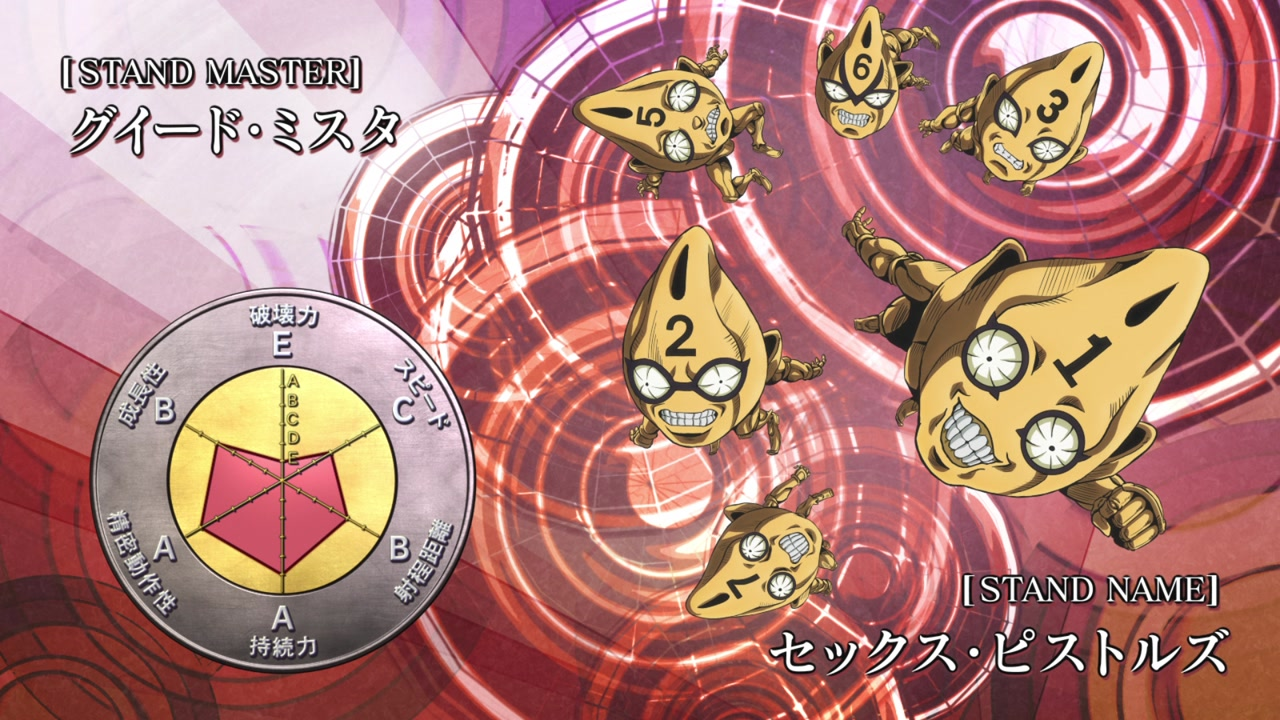 The stand is autonomous, and each bullet has its own personality. However, they are relatively useless if Mista hasn’t shot them out of a gun or if they haven’t shot themselves out of the gun. If the bullets activate the primer, the chemical that allows bullets to fire out of guns, they can activate their ability themselves.

When shot, the bullets are a great help in battle and are the reason Mista has escaped many deadly battles alive. For example, when Mista is shot in the head 3 times, Number 5 stopped the bullets from killing him. If a bullet is unharmed, it allows him to survive insane attacks as well.

There is one interesting thing about Mista’s stand. His stand is called Sex Pistols, and there are six bullets, but if you look at the photo above and count the bullets, you’ll notice that the number 4 is missing. There’s a reason for that; Mista’s tetraphobia.

Tetraphobia is a phobia of the number 4. In many Asian cultures, the word ‘four’ rhymes with ‘death’, so a lot of people try to avoid anything with that number.  It’s very similar to Triskaidekaphobia, the fear of the number 13, and the deadly superstitions that come with it.

Mista’s fear of the number 4 dates back to his childhood. When he was a child, he ended up adopting a cat from a litter of 4. His cat ended up scratching out his neighbors’ eyes, and ever since then, Mista had a fear of the number.

This continues to adulthood. While his stand doesn’t technically have a number 4, number 5 fills that role. A running gag in the series is that the bullets all pick on number 5. Even when Mista is fighting, he will try to not shoot his gun if there are only four bullets in it.

The fandom’s response to this was to create memes about Mista’s phobia every April. April is known as National Bully Mista Month. Fans come together and create posts about his fear and have a few laughs at his expense.

Does He Have Hair Under That Hat?

Since 1995, fans have been wondering what lies under Mista’s hat. We know that Mista usually uses his hat as a way to store bullets and other items as a way to get to his gun faster, but that’s it. We also know that he has a lot of body hair thanks to Trish and Mista switching bodies.

Even though we have all this knowledge about him, we never see Mista without a hat. Even in flashbacks, he’s usually wearing a beanie. This has led fans to wonder what he’s hiding under his hats. While there isn’t a confirmed answer from Araki, we’ve come up with some guesses.

Mista could be bald. It’s possible that he looks better without hair, so he shaves it all off. Another possibility is that Mista lost all of his hair due to stress or genetics.

Considering that Mista was under constant stress before and after becoming a member of Passione, it’s reasonable to think he’s bald. Extreme stress can cause hair loss in a lot of people. However, this isn’t a permanent condition; hair does grow back after stress levels return to normal.

He could also have Male Pattern Baldness. He may be 18 in the series, but he could be one of the few young adults who have this. A report shows that  20% of men show noticeable hair loss by the age of 20. Instead of waiting for the process to slowly make him bald, he could’ve taken matters into his own hands and sped up the process.

He has Short Hair

Hat hair is a common issue that all of us have experienced at some point. Seeing that Mista never takes off his hat, it’s fair to assume he likes his hat, but hates hat hair. The solution to his problem is to tuck in his hair under a wig cap.

Another possibility is that he has very short hair. Since Mista’s hat covers his neck and most of his forehead, it’s pretty easy to see how that hat could cover any signs of hair. It would also explain why no hair comes out of his hat after strenuous activities.

A Vortex of Ammo

It’s possible that instead of hair, Mista has a vortex full of bullets that occasionally needs reloading. Yes, this is a pretty wild guess, but we’re talking about a character in Jojo. It’s not a far fetched theory if you think about everything we’ve seen in the series. It is confirmed that Mista keeps ammo inside his hat; this is shown when he fights Pesci and how he reloads his gun with the bullets coming out of his hat.

How is this Reflected in Cosplay?

Most fans believe that he has black hair due to his eyebrows. When it comes to cosplaying him, fans opt to not show their hair or opt to use their natural hair if it’s a dark color. This changes cosplayer to cosplayer since some have used black wigs in their costumes.

There is no right or wrong way of dressing up as Mista or any character. A trend with genderbent versions of Mista is that they sometimes have long hair coming out of his trademark bullet hat. At the end of the day, cosplayers take their own creative directions to create a cosplay they are proud of.