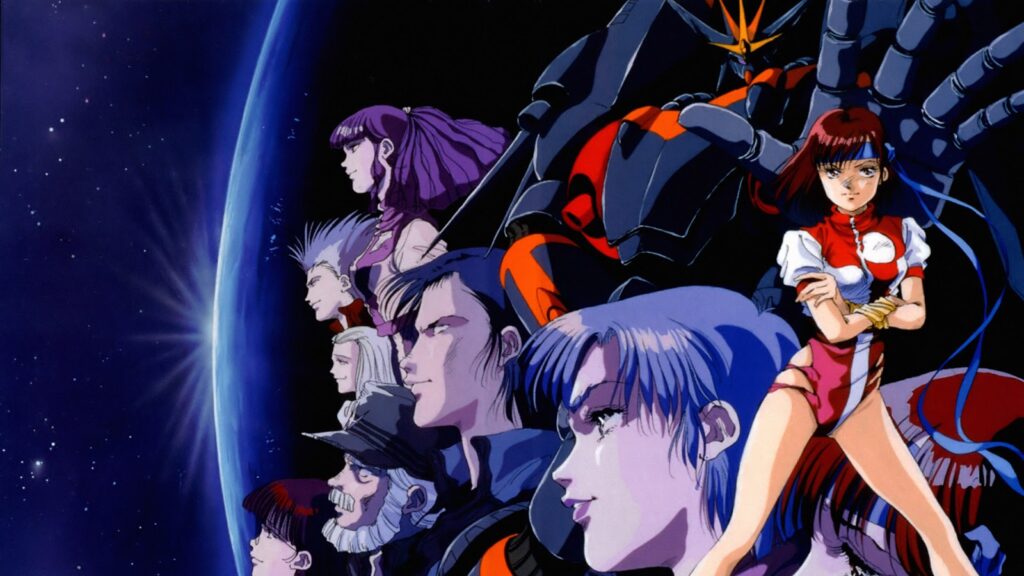 Top wo nerae! (Aim for the Top!), or Gunbuster, is a highly influential anime series that you may not have heard as often as you’d think (if at all). Starting as a six-episode OVA series by Gainax and the first directorial work of Hideaki Anno is considered to lay the blueprints for Gainax’s future works, including the famous Neon Genesis Evangelion.

Before Gainax came to be, they started off as a fan-made studio known as Daicon Film in the early 1980s. They gained traction with their animated shorts, Daicon III and Daicon IV, which were eponymously named after the conventions they debuted at. The studio changed their name to Gainax in 1985 and released the well-received but underperforming Royal Space Force: The Wings of Honneamise two years later.

It was their second release as Gainax that would change everything. While the name (and the basis of the plot) was created as a combination of the tennis anime Aim for the Ace! and the film Top Gun, it would evolve well past that in the following episodes as it tackled hard sci-fi concepts. The series released over three volumes from 1988 to 1989.

The premise is simple enough: humanity has evolved enough to leave the solar system, where they discover a threatening alien race referred to as Space Monsters.

Humanity in turn develops battleships and giant mechs to defend themselves from the still larger Space Monsters. Between their own personal problems, the threat of their enemy, and the consequences of time dilation as they travel at near-light speeds, the characters of Gunbuster go through a lot. The usage of female pilots wasn’t common for mechas and writing them as strong characters with relatable problems helped the series stand out.

It would be hard not to spoil anything about the series as I talk about it here. There’s a lot that happens within these six episodes and I’d hate to spoil anything for anyone interested in watching the series for the first time. For that audience of people, I’ll be explaining what options you have to watch the series and its sequel (which I’ll also talk about) below!

Now, if you want to watch Gunbuster in its original six-episode OVA form, you’re going to have to do some searching and take out your wallet. There was a Blu-Ray release of the OVA episodes that came out in 2012, but it’s not as easy to come by and not cheap either. Whether you look for that or older DVD copies, you’re likely to get it second-hand.

What’s easier to find is the theatrical version of the series, which uses the same footage but cuts it to around 90 minutes. Both the DVD and Blu-Ray versions of this can be found on Crunchyroll at a more digestible price. It’s also available to stream on VRV if you have a subscription. It’s worth mentioning that the theatrical version is not as beloved as the original release, with many criticizing the amount of content that’s cut from it.

While Gunbuster can be a hassle to watch, its sequel Gunbuster 2 (or Diebuster) is thankfully a lot easier! Similar to its predecessor, there exists a six-episode OVA and a cut down theatrical version that fans don’t like as much. The OVA can be streamed for free on Crunchyroll or Amazon Prime Video, while the movie version is streaming for free on Tubi. If you prefer a physical copy, then Rightstuf has you covered.

Noriko and the Rest of the Cast

The Beginning of Tropes

Gunbuster was a success all by itself, but its influence would reach ever farther.

Gunbuster and Evangelion would share some similarities beyond their mecha and the constant threat of apocalypse situations. Both series feature a similar trio of pilots: a brown-haired protagonist whose abilities as a pilot are questionable, a blue-haired pilot who’s more experienced and that the protagonist gains admiration for, and a red-themed pilot who isn’t Japanese and conflicts with the other characters due to her pride and aggression.

Noriko would be a character type that many Gainax and Gainax-related characters would take inspiration from.

Her increasing uncertainty in herself as she’s constantly burdened with responsibility unfit for her age and experience proves to be her biggest obstacle. It’s only after experiencing loss and continually being pushed by her “Coach” that she grows into a confident badass who works her hardest to fight and protect those she cares about even against the most unlikely of odds.

Interestingly, in this regard, she is the opposite of Shinji Ikari from Evangelion.

While both are essentially teens that are tasked with saving the world, Shinji (and the world he lives in) is in much worse shape and as a result he never has a miraculous breaththrough. Simon from Gurren Lagann however, is thankfully more comparable. He has his own “Coach” in the form of his “Bro”, whose lessons to believe in himself are what helps him mature into a man that lives to “go beyond the impossible and kick reason to the curb” among other hype-level motivational ideals.

Something else these three protagonists share is the loss/near-loss of someone that breaks them down and serves as a key moment in their development.

Noriko and Shinji become friends with a fourth pilot character who subsequently dies/nearly dies, with the protagonist blaming themselves (in the latter’s case, Shinji’s mech almost kills his friend). Simon’s loss is a little different, but both he and Noriko share similar character arcs where they get over their personal loss and continue to fight in their honor and to protect their friends.

A well-known Gainax trope that gained popularity with Gunbuster was the “Gainax Pose/Gainax Stance/Gunbuster Pose”. Although this pose in itself was in reference to large mecha series before it, the pose gained its traction after Gunbuster, and became associated with Gainax as well as the studios that split off from it that used or referenced it in their later works: including Diebuster, Gurren Lagann, Little Witch Academia, Darling in the Franxx, etc.

Another popular trope that isn’t original to Gunbuster, but has been emulated by later Gainax/Gainax-related works is calling out attack names.

While magical girl shows and the like may have had their protagonists learn or need to incant the names of their attacks, Noriko seems to pull out the Super Lightning Kick out of nowhere, with other characters acknowledging it as an advanced technique for her.

This trope has even found itself used in unrelated animes like Symphogear…which also initially features three pilots with similar colors and character types as Gunbuster.

It would be remiss to not of course mention the infamous “Gainax Bounce” trope here as well. Gainax is very well-known for its fanservice and in particular the animation or jiggle of characters’ breasts. Gunbuster would be the first one to start this trend, albeit in a more realistic manner and not exaggerated as it’s become known. 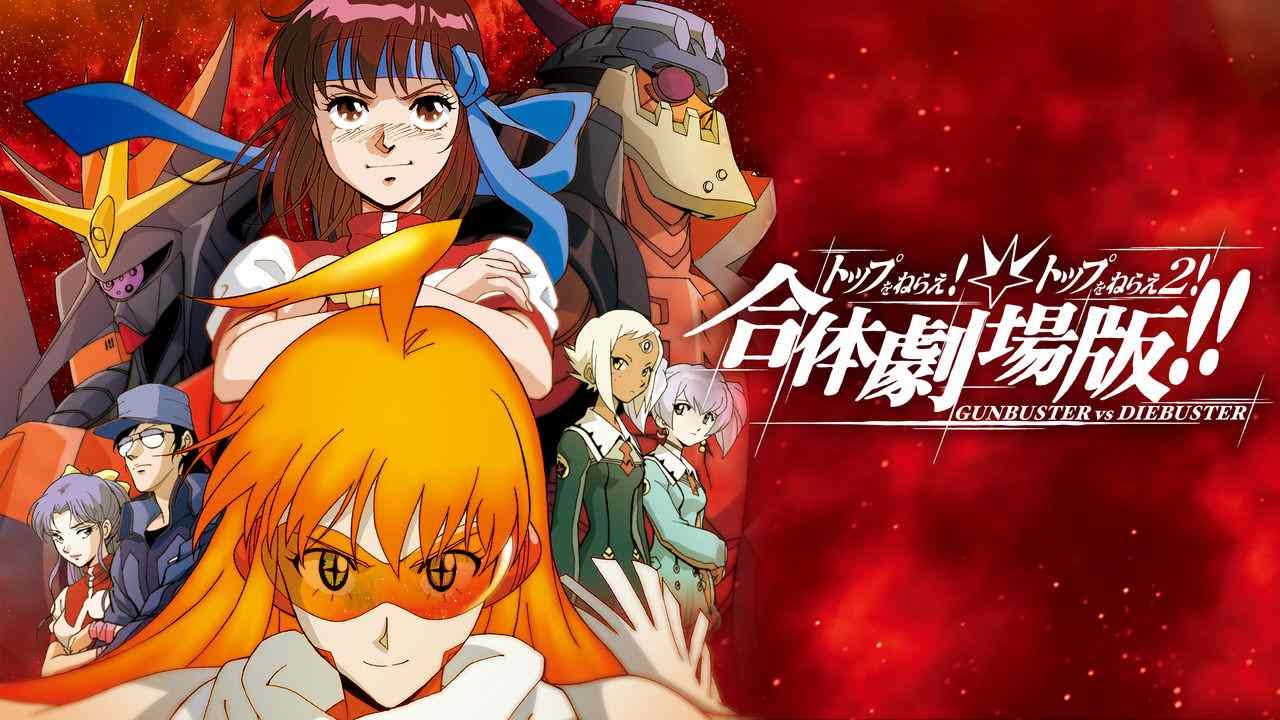 For Gainax’s 20th anniversary, they released a sequel series called Gunbuster 2, or Diebuster. The sequel would follow a more over-the-top style than the original, but still followed some similar themes. More importantly, it would pave the way for their later works (Gurren Lagaan would follow a similar exaggerated style).

In 2018, the newly branded Gaina studio (formerly Gainax Fukushima) announced many of the projects they were working on, including Gunbuster 3. While they announced dates for their other projects for 2021 and 2022, they gave none for Gunbuster 3. It’s possible the series may not come out for another few years at best.

Even then, fans are unsure how to feel in regards to Gainax. The company has garnered a negative reputation with its controversies.

Anno detailed his bargaining with Gainax after they asked him for a loan (on top of payments they were already being delayed for work on the Evangelion Rebuild movies), which he agreed to give interest-free if they gave him the rights to Gunbuster and FLCL. Everything was set into motion when Gainax would suddenly ask for more money while they sold their works off.

When Anno sued for the money they already owed him and won, he found out the company had split up its works to its many other studios.

Some fans assume that Gaina won’t actually do anything with these properties, but continue to benefit from the sales of merchandise and sell it off if they need the money. Others believe they will release something in lieu of Gunbuster 3, but are hesitant to support a company that has made more than their share of irresponsible decisions.

The future for Gunbuster is in murky waters right now and fans are understandably confused. No matter what the future of the series is however, nothing will change the impact and influence it’s had in the anime world.