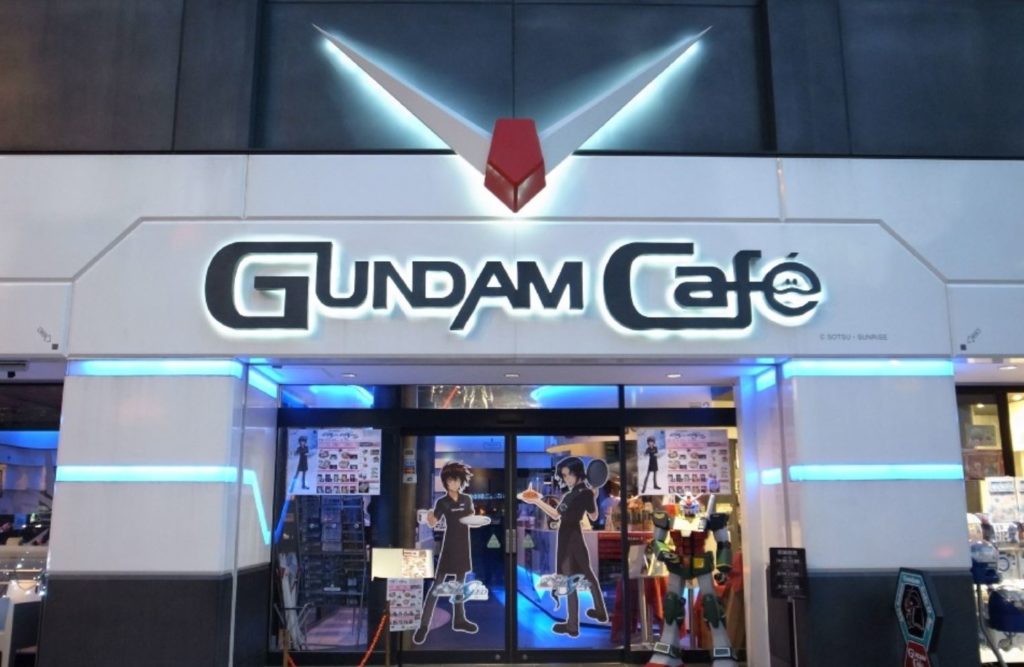 Akihabara. A mecca for otaku all around the world, usually it tops the list of places anime fans want to go to when making their maiden voyage to Japan. Maid cafes lining every street, dozens of stores selling figures of any anime character you can think of, and enough retro game stores that you’ll find whatever you’re looking for. Often Akiba will host pop up shops and limited time only cafes so you can get your fix of the latest anime and games. The place has become such a symbol of sub-culture that plenty of meta anime and games incorporate Akiba and all of its fandom goodness, perhaps most notably Steins;gate. However aside from a couple of our favorite institutions, like our friends at Club Mogra and the personal staff favorite Star Kebab which has the best kebabs in Japan, once you spend some time in the district you realize most of what there is to do is shop and hit the same arcades the rest of Tokyo has; The Gundam Cafe, which is set to expand to about four times its current size by devouring the AKB48 that’s always stood next to it. 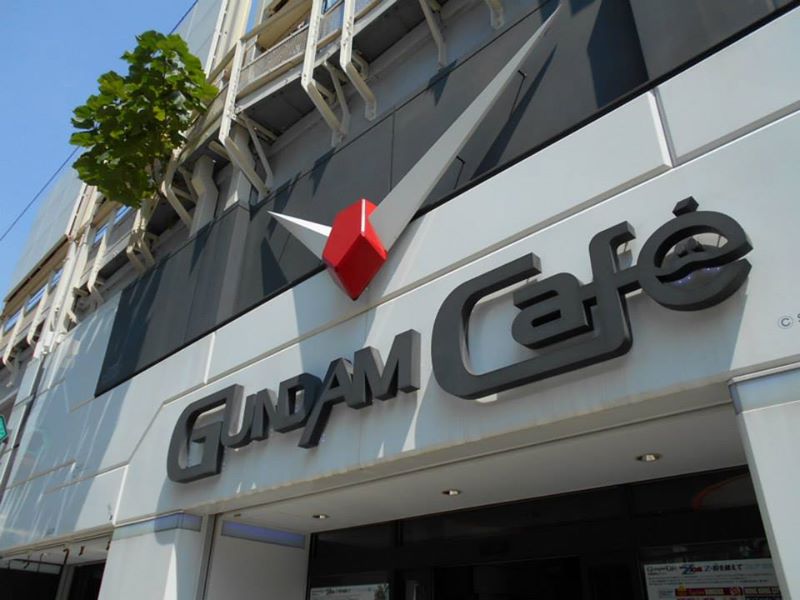 Aside from Mogra and our beloved Kebab shop though, one another place has always made Akihabara worth the trip and that’s the original Gundam Cafe. While most people think of Odaiba and the life-sized Gundam when thinking about cool Gundam things to do in Tokyo, the cafe has always been a primo spot worth your time. Unlike the many pop up cafes in Akihabara that come and go, this one’s a permanent fixture. Not only do you have a consistently changing menu filled with Gundam themed food and drinks, you also have new limited edition series specific merch coming in all the time. While whatever currently running show’s bound to get the most tie-in merch and edibles at any given time, the cafe regularly gives spots to older titles. During the fall the cafe did a campaign centered around the fan-favorite Mobile Suit Gundam Wing for instance. All this said this resting spot offers more than just themed food and buyables. 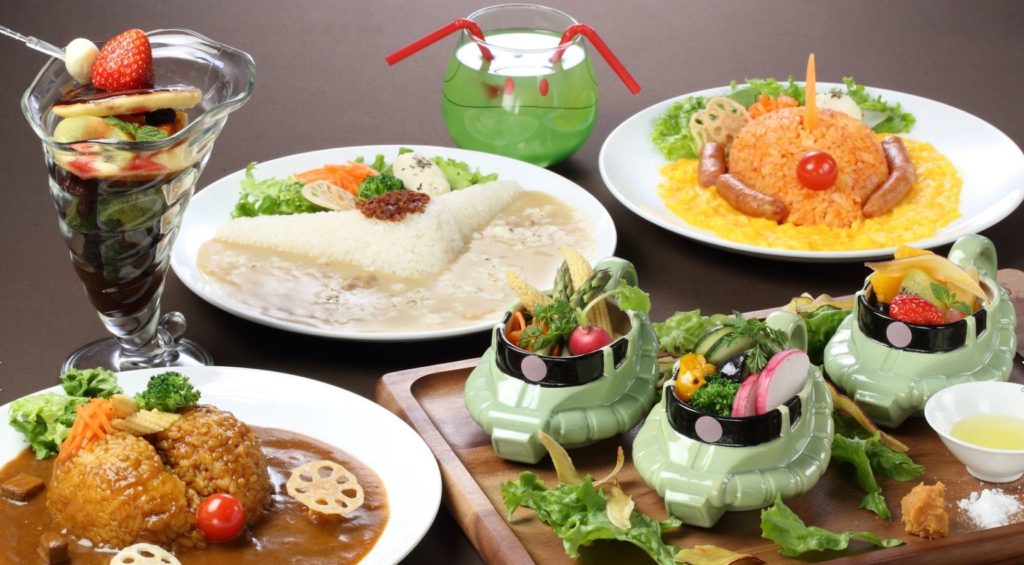 Being a permanent space in Akihabara, The Gundam Cafe sports more than just rice shaped like a Zaku head or Salad served in a Zaku bowl. The entire interior architecture is a spot of delightful Gundam kitsch that makes you feel like you’re aboard the cafeteria of The White Base or some other traveling space ship. Especially at night, all the moody blue lighting makes this cafe feel like a real sci-fi delight. Just being inside of it brings you into another world, in another more universal century. Ha ha. Often the cafe insides will be decorated with a rotating cast of character cut-outs depending on the marketing tie in of the month. Throughout the years I’ve seen many different shikishi, autograph and illustration boards, provided by heavyweights including series creator Yoshiyuki Tomino, Gundam 00 creator designer and Loveless creator Yun Kouga, and many other notable illustrators, voice actors, theme song singers, and animators switch in and out over time.

My personal favorite part of going to the Gundamcafe though isn’t its futuristic interior. It’s not the fact that I can get Kamille Bidan late art I can post on the gram for clout. Nor are the merchandising goods what whets my appetite the most. What I like the most about visiting is so simple, I’m going to sound stupid. Hiked up onto one of the cafe walls, a giant TV screen consistently cycles through every single Mobile Suit Gundam opening. If you sit for an hour, sipping on your Char Aznable themed alcoholic beverages (yes they serve booze), you’ll become an expert in Gundam karaoke. It’s neat to get a crash course in Gundam history every time you go and while you can just look up most of these openings on YouTube, there’s something about watching then while enjoying the space ambiance of the cafe. Plus, so many Gundam songs are all time bangers. Two-Mix’s ‘Just Communication’ is still the jam and all the T.M. Revolution songs you will? I’m kissing my fingers like a chef as I type this. 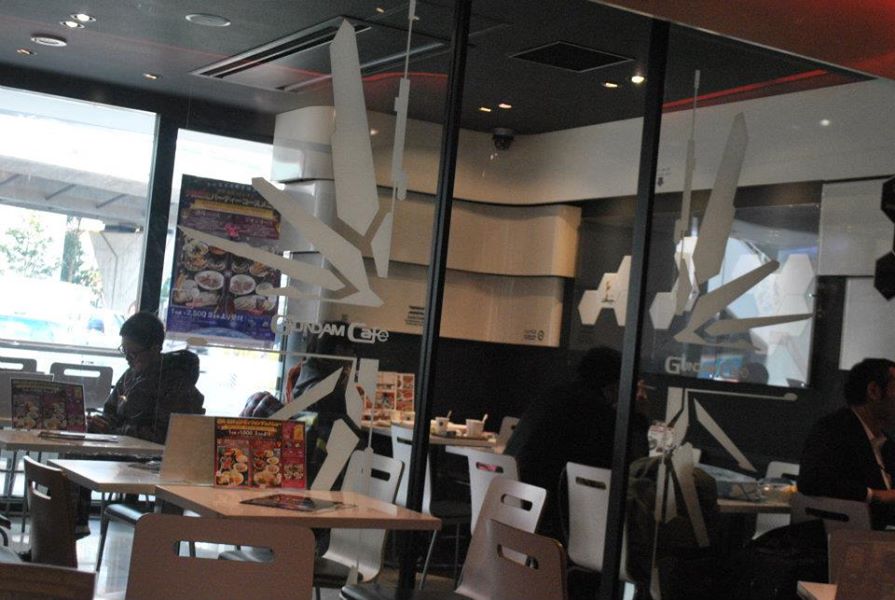 Being such a rad place, the Gundam Cafe has been in business for 10 years and it’s still going strong. Until now, it’s stood side by side with the AKB48 cafe. Truthfully I’ve never been inside its next-door neighbor but from the outside it looks similar; Themed goods centered around different idols, a rotating menu of desserts, and maybe if you’re lucky real-life AKB48 members occasionally swing by for an autograph session or mini-performances. The area of Akihabara both shops are in has been going through a lot of renovations in recent years though and maybe that cut into sales. For whatever reason, the AK48 cafe closed its doors for good last December. Like a newtype ace pilot who always senses their opening, the Gundam Cafe has seized their chance to strike. As we said at the beginning, with an announcement made a few days ago the cafe has announced its plans to expand four times its current size presumably using the former AKB48 cafe space.

While AKB48 die-hards may view this as a sad occurrence, I’d be lying if I said I was displeased about the news. While I had no problems with both cafes existing side by side, they represented different sides of otaku sub-culture. One, the old school based on the love of anime and the creativity and artistry that goes into it. The other was a piece of idol sub-culture all centered around one of its most beloved yet controversial groups. AKB48 has certainly inspired and brought joy to many people yet the stories of idols having to shave their heads to apologize when it comes out they have boyfriends haunts the sub-culture for good reason. Not trying to open up the whole can of worms on this debate, but if one was to outlast the other which it has I’m glad Akihabara and its frequenters have chosen to keep around the establishment that embodies some of the best of what the city and the culture have to offer.

Plus, with all the additional space the possibilities of how the Gundam Cafe could further improve are endless. I’m sure Gunpla will be playing a bigger part in the establishment as its surprisingly been absent until now. Maybe different sections of the cafe could be themed around different series, like a Universal Century area and one dedicated to the many AU shows as well. I’d be sad if they didn’t fill it up with more unique interior architecture, whether its the same sci-fi design they have going or if they want to incorporate new elements and ideas.  If the kitchen’s expanded, the cafe could also up their menu game and throw at us Gundam and food combinations previously unheard of! Personally, as long as they keep the anime openings and keep the theming intact, I’ll be happy with any additions they’ll be making.

Mobile Suit Gundam is a legacy both in terms of Anime and Japan. Last year the series celebrated its 40th anniversary with a whole slew of merch, projects, and unexpected crossovers. Yoshiyuki Tomino created a series that pushed boundaries by, instead of being a fun robot show, showcasing the horrors of war and fans ate it up. Some iterations are better than others, of course, certainly I’m not the biggest Gundam Seed fan in the world, but the franchise is responsible for a lot of good and arguably single-handedly elevated what TV anime could be. With no signs of slowing down, the most famous giant robot juggernaut continues on dominating the sub-cultural landscape. This time, in the form of its cafe growing four times its current size by eating an AKB48 cafe. Poetic, isn’t it?

The Akihabara Gundam Cafe will be closed for renovations the next few months and is set to reopen this July.