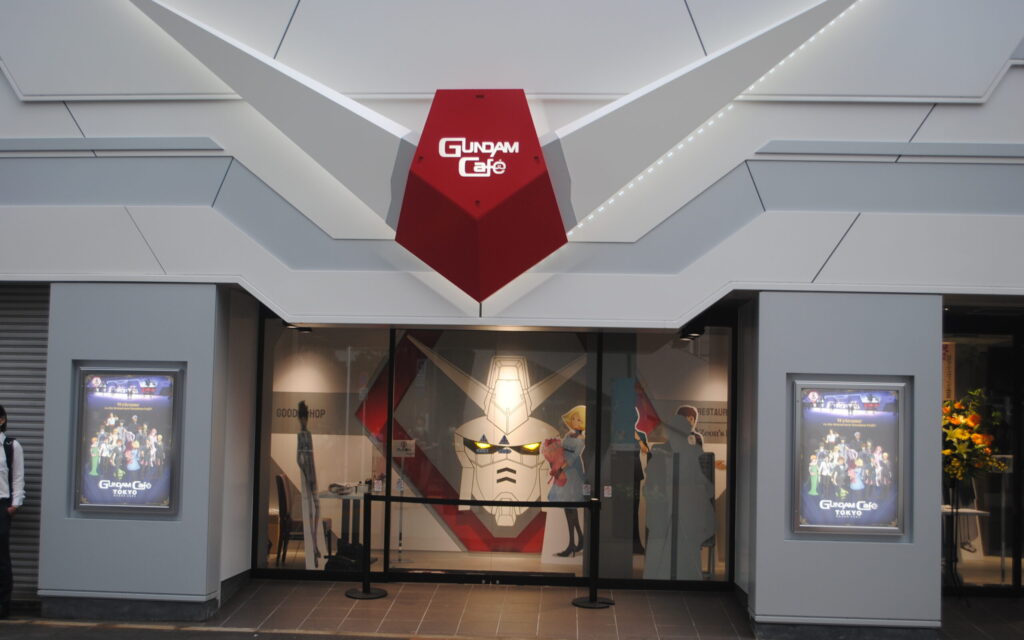 It’s official, the era of AKB48’s domain over Akihabara has officially come to an end! A weird way to start an article about a themed Gundam cafe but if you’ve visiting Akiba at all in the last decade, you’d know that up until earlier this year both Mobile Suit Gundam and AKB48 had dedicated permanent cafes standing side by side. In January, a time where none of us really know how much havoc the Coronavirus would wreak on us all, word that the AKB48 cafe would close up shop and then essentially be cannibalized by the neighboring Gundam operation. A victory for the culture, at least to us. Today, the newly renamed and vastly expanded Gundam Cafe Tokyo Brand Core officially reopened with a little help from a familiar face! 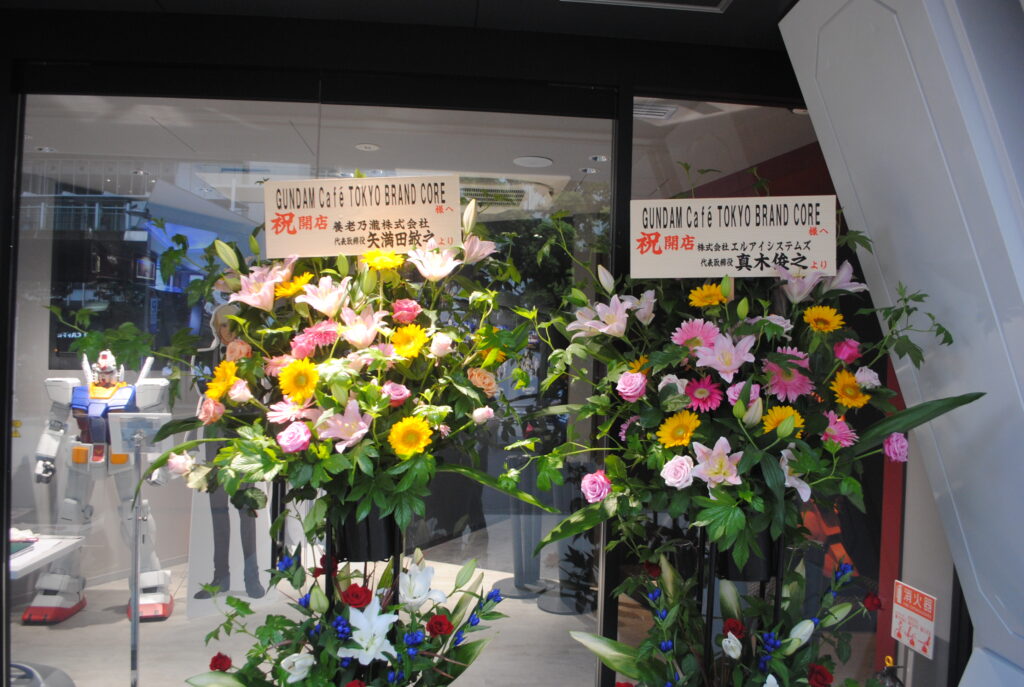 I myself only found out minutes before the Gundam Cafe Tokyo Brand Core’s opening ceremony, and yes there was an entire opening ceremony, that one Toru Furuya would be in attendance. As the cliche goes, even if you haven’t heard of Toru Furuya you’ve heard Toru Furuya. One of the all-time great Japanese voice actors and a 60+ year veteran of the craft, he’s voiced a number of iconic characters including Sailor Moon’s handsome ladykiller Tuxedo Mask, Pegasus Seiya in Saint Seiya which we promise is popular everywhere outside of America, and the particularly relevant Amuro Ray from Mobile Suit Gundam. Depending on who you ask, which one of these performances was his career-defining role will differ but you have to understand that it was a tremendous opportunity to get to see this legend up close and personal today. 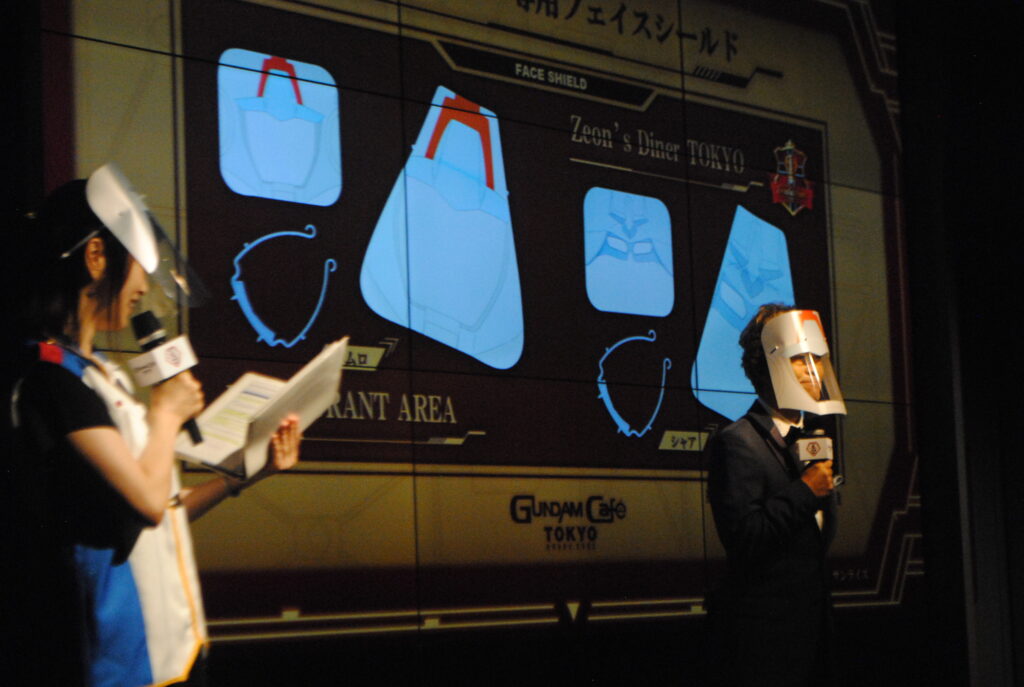 Toru Furuya made his grand Gundam Cafe Tokyo Brand Core appearance after a few words from representatives from Bandai Spirits, including their ‘Chief Gundam Officer’ which is a job I’d love to have someday. Furuya acted as a commentator along with a Gundam Cafe staff member clad in a Gundam Seed inspired outfit. He burst on the scene with an Amuro Ray themed Faceshield and she had donned a Char Aznable inspired mask. I’m sure you can admire the witty banter that came from this wacky scenario. You would also be right to assume that he peppered his introduction with a few choice Amuro Ray quotes and we ate it up, which eating things up is the point of a cafe isn’t it? After these antics, the two demasked and gave us a rundown on what the new Gundam Cafe expansion would offer. 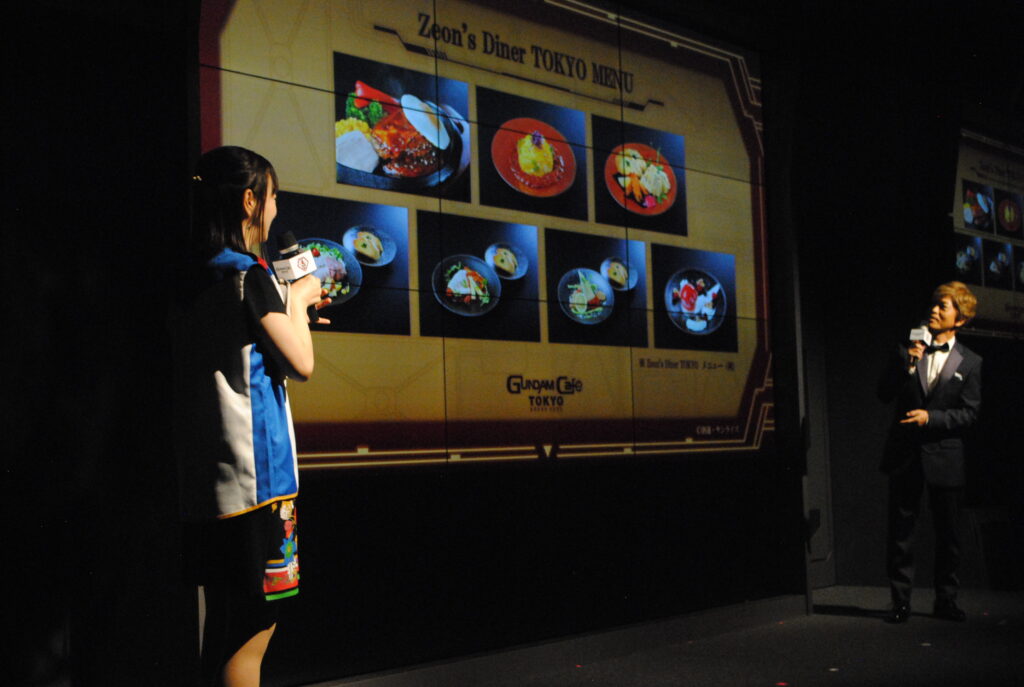 As Toru Furuya offered his out of character but colored commentary on the many themed foods and drinks the cafe would offer, he admitted that more than anything that some ‘alcohol sure would be good.’ Goods news of you for those of that have reached the legal drinking age, you can in fact buy booze at the Gundam Cafe Tokyo Brand Core!. We’d like to be upfront in that during past visits to the pre-renovated Gundam cafe, we found the food was always serviceable but not to die for. You’re paying for the privilege to take a cool Instagram picture of Zaku shaped fried rice, not for a five-star meal. That said with three entirely different dinings areas now, it seems like the menu’s been vastly expanded and we’re looking forward to trying the new offerings. In the main restaurant area, where the opening ceremonies were taking place, the audience was informed guests would be able to watch exclusive dinner shows and one was previewed. 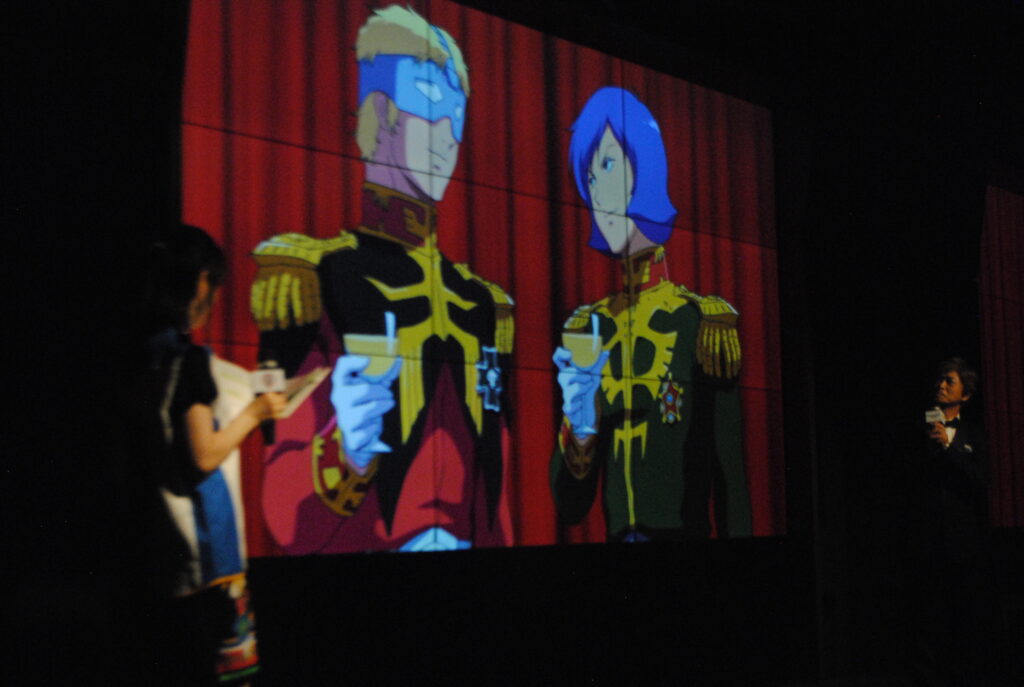 Furuya seemed genuinely surprised to see Char on the big screen and reacted hammed it up as Amuro for the audience. It was really something to see Char and Garma Zabi casually chat wine together as if Char wasn’t going to kill Garma himself shortly after. The presentation continued as we learned about the ‘fortuneLatte Cafe’ where the old Gundam Cafe space was, the ‘Goods Shop’ which is exactly the merch store it sounds like, and, most exciting of all, the ‘Zeon’s Diner TOKYO’, an entirely separate Zeon themed restaurant within the Gundam Cafe Tokyo Brand Core. We actually got to tour the Zeon Diner after the ceremony ended and it was the coolest thing we’ve seen in a while. 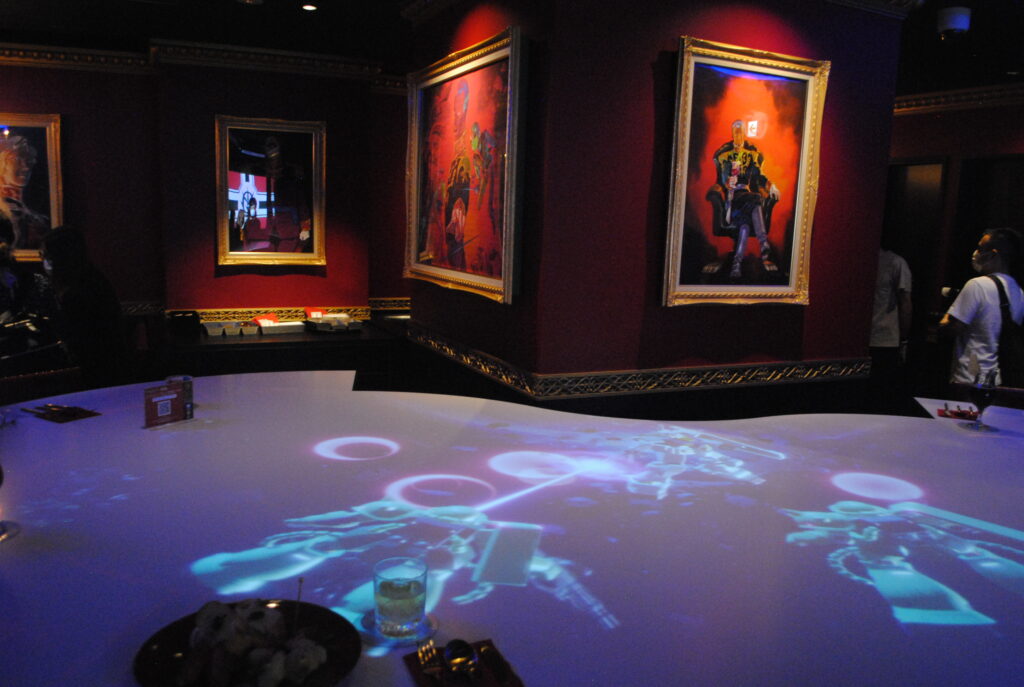 The ‘Zeon’s DINER Tokyo’ was truly something to behold. Sure it wasn’t at all like an actual diner, but it was cool enough to not matter. You had illustrations of prominent zeon characters like Ramba Ral and the Zabi family hanging on the walls and a red/gold color scheme throughout. You can actually play a gigantic interactive AR game on the table above which looked pretty fun, though we question how quickly that table will get dirty with everyone pawing at it after taking huge burger chomps. Finally, you had a special guest drinking at the bar in the back, making for a perfect photo op. We can’t wait to get a proper reservation and do a deep dive on the Zeon diner at the Gundam Cafe Tokyo Brand Corenext time. 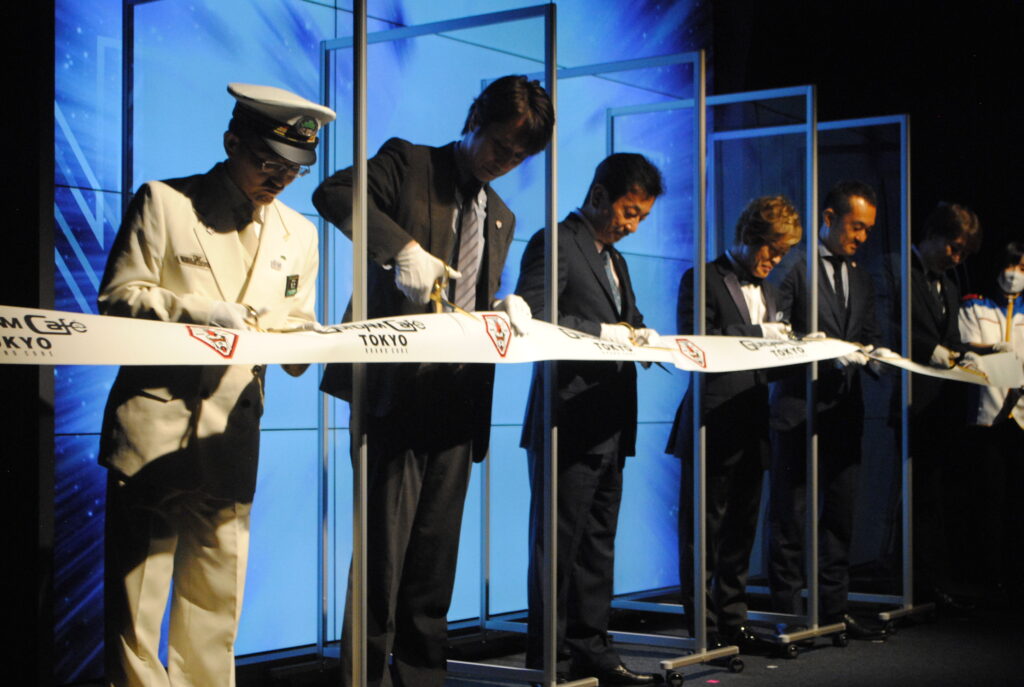 The Gundam Cafe Tokyo Brand Core opening ceremony ended with a spectacular ‘rope cutting event’. Lined up you had representatives from Sunrise Animation, Bandai Spirits, Toru Furuya of course, and on the left, in the dashing outfit, you had the Akihabara station master. Being a one minute walk from the Akiba JR station and with trains running right on top of the building, we imagine the station was involved with the planning of the expansion in some capacity. You can see the glass partitions in between each rope cutter, which was the cafe’s way of upholding social distancing standards. Actually there was one last surprise before we petered out of the room and did a quick walking tour of the shop; July 31, as you can check on Wikipedia, is Toru Furuya’s birthday! Not wanting to miss an opportunity, staff brought out a cake to celebrate and were even selling related commemorative lattes! Yes, he got dressed up in an expensive suit and spent the morning of his 66th birthday with a bunch of nerds in a Gundam shop. Even if it has been a huge part of his life, we thank him for his professionalism and dedication to the fans. 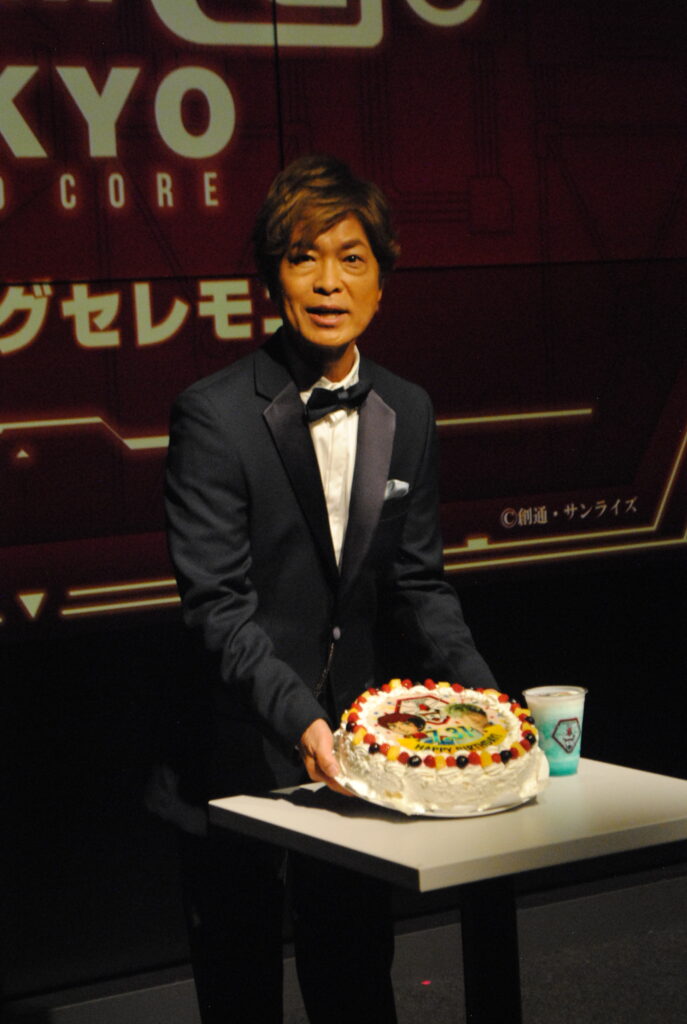 With the Gundam Cafe Tokyo Brand Core back in action, otaku and tourists alike have a new reason to visit Akihabara. The old cafe was always one of our favorite spots to kill an hour or so but Sunrise has really outdone itself with this new expansion. We would say we’re sorry for all the disappointed AKB48 fans out there, but what now exists in its place is so overwhelmingly cool that we can’t even fake the sympathy. Corona is once again on the rise in Tokyo so we do ask all potential visitors to be careful. That said, we’re sure the cafe will still be standing after the second wave dies down.

You can visit the Gundam Cafe Tokyo Brand Core in Akihabara now.