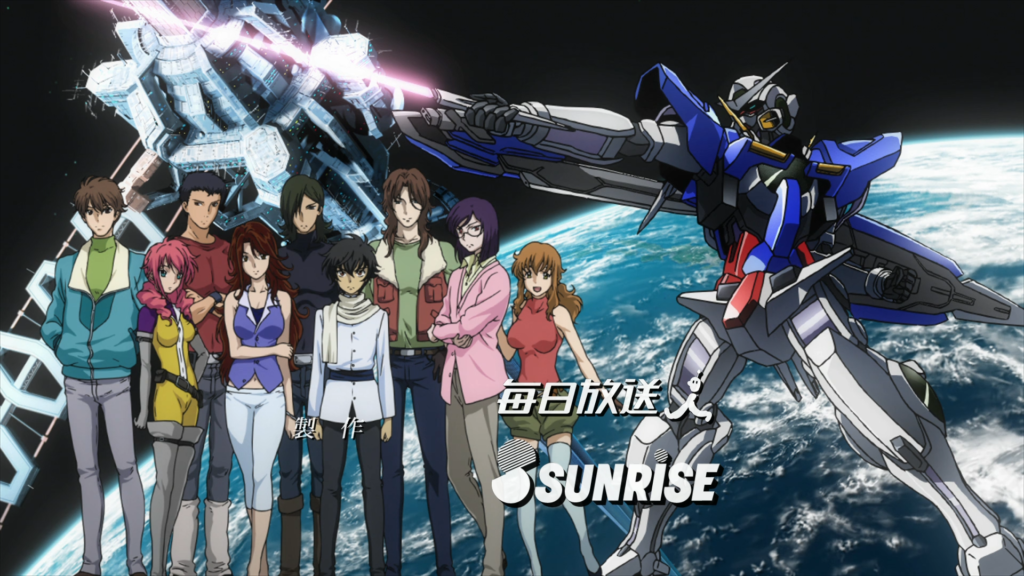 The initial announcement of Mobile Suit Gundam 00 generated some buzz in 2007, particularly amongst western anime fandom, for two broad reasons: First, Sunrise (the studio behind all of Gundam) headhunting director Seiji Mizushima fresh off finishing the beloved and critically acclaimed original Fullmetal Alchemist whetted not-Gundam-specific anime fans’ appetites; and second, it seemingly would have a lot in common with Gundam Wing, still the most popular Gundam stateside.

15 years later, Gundam 00 sits in a middling within the collective fandom memory: forgotten by the greater anime consensus and met with lukewarm feelings by established Mobile Suit fans. Nobody would call it the worst mech anime ever made, but few people would claim it as their favorite. If you are considering watching this one, we want to note what ambitions Sunrise had and what they pulled off.

Seiji Mizushima, along with series compositionist Yousuke Kuroda, went no holds barred, throwing viewers into harrowing scenes of child-soldiery at the very beginning of episode 1. Anti-War sentiments have been integral to Gundam from the very beginning, and just finishing FMA with its many direct parallels to the still ongoing wars in the middle east, Mizushima felt right at home tackling very real-world issues of war in Mobile Suit Gundam 00.

The child soldier pictured above, series protagonist Setsuna F. Seiei (and yes the ‘F.’ is always noted), after growing up joins a team of pretty boy Gundam Meisters (read; pilots) at Celestial Being with the ultimate goal of ending all conflict. Answering to nobody, some regard the group as just saviors and others see them as wanton terrorists.

While not the first series in franchise made after, Gundam 00 100% can be considered the premiere Post 9/11 Gundam Anime.

To the ends of depicting a rogue yet benevolent mercenary group as believable, Mizushima and Kuroda massage a lot of tension into Mobile Suit Gundam 00 with some mixed results. On paper, having a team of wholly idealistic ‘good guy terrorists’ not getting along makes a lot of sense.

We love the idea of a ‘non-united-team’ (which Mobile Suit Gundam Wing also played around with but not to this degree), but in service to realism and messaging, the character relationships don’t come across as dynamically as they could. Neither does the story, unfortunately.

Instead of abolishing on big enemy, Mobile Suit Gundam 00 sees the celestial beings getting involved in all sorts of armed engagements all around the world, ‘war’ itself being the big evil. A nice message and conceptually a neat avenue, but none of the bads nor the stakes ever feel as high as Amuro and the White Base fighting Char and the Zeon army.

What 00 does have over the OG Gundam, though, are heap of lavishly hand-animated mecha fight combat we sorely miss as CG became the standard for most merchery in modern animation. The 00 robots all look cooler and stay looking cool in motion, surely something to be thankful for. The first season also features a killer L’Arc En Ciel opening we’ll still go to bat for till this day.

As we set out on delving further into our Brief Guide to Gundam for Busy People, new reviews added every week, we’re reminded Gundam isn’t just cool robots and a toy-selling vehicle. Even some of these less loved Alternate Universe entries continue creator Yoshiyuki Tomino’s ultimate anti-war point, with Mobile Suit Gundam 00 doing so in a way tailored to the turbulent Mid 2000s.

You can read more fellow Gundam Knower Steven’s more in-depth analysis on Gundam 00 here, but in short we’d say check this one out to enjoy the spectle, chew on its bigger ideas, but maybe not take a magnifying glass to its finer plot points and characterizations.

You can watch Mobile Suit Gundam 00 on Crunchyroll.