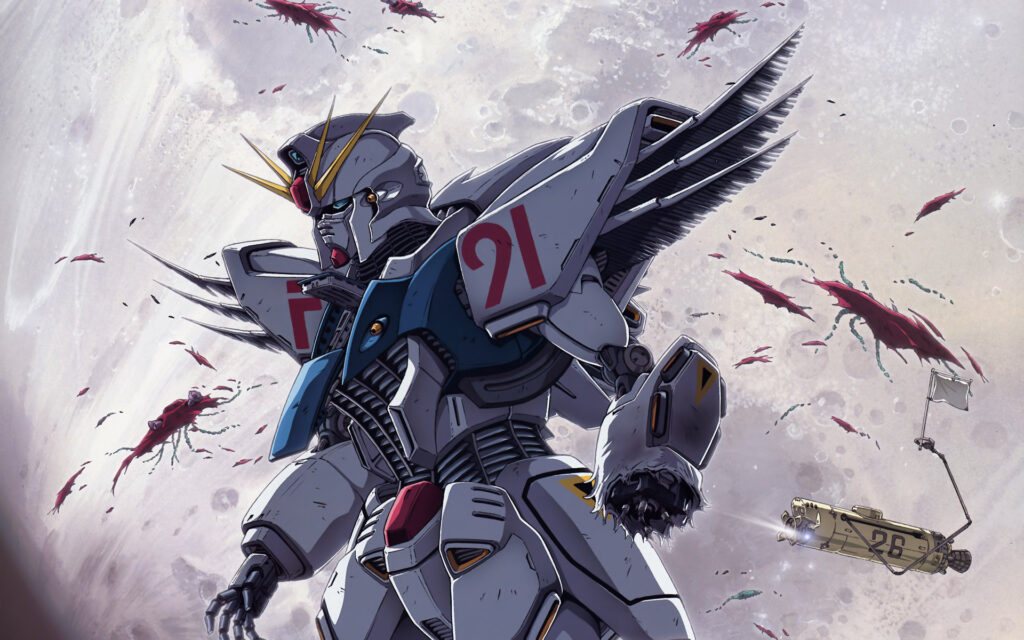 Envision being a Gundam otaku (arguably the most evolved of all anime otaku) in1991: Mobile Suit Gundam Char’s Counterattack, the franchise’s first fill, put a proper end to Char and Amuro’s decade-spanning feud three years earlier. In that gap, the only Mobile Suit Gundam anime being released were the particularly excellent but ultimately side-story Gundam 0080 OVAs.

However, you heard Gundam creator Yoshiyuki Tomino would be returning to create an entirely new chapter for the Universal Century timeline, and you’d be getting some more side-story OVAs in the form of Gundam 0083 Stardust Memory. Any Gundam fan would be excited, but hopes do betray.

Stardust Memory was released without major issue to good reception (we’ll touch on that series in the future to be sure), but the same can’t be said for Mobile Suit Gundam F91. Instead of existing as a full-length TV entry as Tomino envisioned, staff disputes lead to a halt in production. Eventually, they decided to salvage what had been produced from the first 13 episodes into a film.

Tomino envisioning Gundam F91 as a soft-reboot of sorts. The film takes place decades after the end of Char’s Counterattack and features no returning characters. The Earth Federation, still in existence, remain the ‘good guys’ of the story but instead of some Neo-Neo-Neo Zeon off-shoot group, the ‘Crossbone Vanguard’ military-wing of ‘Cosmo Babylonia’ play the offenders this time around.

Tomino whipped up some incredible names at least, for all the movie’s faults. Teen-something-friends Seabook Arno and Cecily Fairchild get caught up in the skirmishing (as pilots tend to do in this franchise), but Cecily’s ties to Cosmo Babylonia’s ruling aristocracy lead to all sorts of complications and drama. Clearly, much thought and preparation went into the set-up for what would be a new beginning, but many of these threads would only be resolved in manga and novelizations years after the fact.

This continuation of the Universal Century meant to introduce myriad fresh players and components to the Gundam mythos, but Yoshiyuki Tomino’s Gundam F91 opted not to mess with one key factor to the franchises: Mobile Suit Gundam’s ever-present and ever-enduring anti-war message.

Even after laboring 12 years away into three TV anime and one feature-length film already, Tomino hadn’t yet tired of hammering in his blatant sentiments regarding the human tragedy of war. Perhaps making people understand becomes a permanent struggle when you’re born during World War 2 and your country gets two nuclear war-heads get dropped on it when you’re just shy of four years old.

In F91 Tomino finds even more inventive and successful ways to sink his message to his audience, like the film’s opening scene which stages a catastrophic battle breaking out in the middle of a major city, depicting civilian death and destruction at point-blank range.

Mobile Suit Gundam F91 also knocks it out of the park in the animation department. Turns out, when you only have to make two hours of animation, you can really stretch your budget out. Compared to what Tomino was doing just a few years earlier in Mobile Suit Gundam ZZ and Char’s Counterattack, F91 comes through with what might be the most fluid, detailed, and colorful animation in the whole franchise.

Yoshikazu Yasuhiko’s characters and Kunio Okawara’s robots, both Gundam mainstays since the beginning, move better than ever. The film’s animation set a high precedent and kickstarted what would be an incredible decade artistic for Sunrise, the production studio behind all of Mobile Suit Gundam, who’d follow it with masterpieces like Mobile Fighter G Gundam and The Vision of Escaflowne.

Detailing each individual instance of Mobile Suit Gundam F91 failing to keep it together as a film seems like an exercise in futility; Most of its faults boil down to the fact that F91was clearly meant to be explored via long-form storytelling.

Despite that unfortunately not manifesting, Yoshiyuki Tomino created a film true to the spirit and intention of all Mobile Suit Gundam and one of its most lavish iterations at that.

Perhaps it’s best to enjoy this one not as a piece of serious Gundam Canon, but more as an audio-visual celebration, touching at what Gundam does best.

You can buy Gundam F91 on Blu-ray from Nozomi Entertainment.