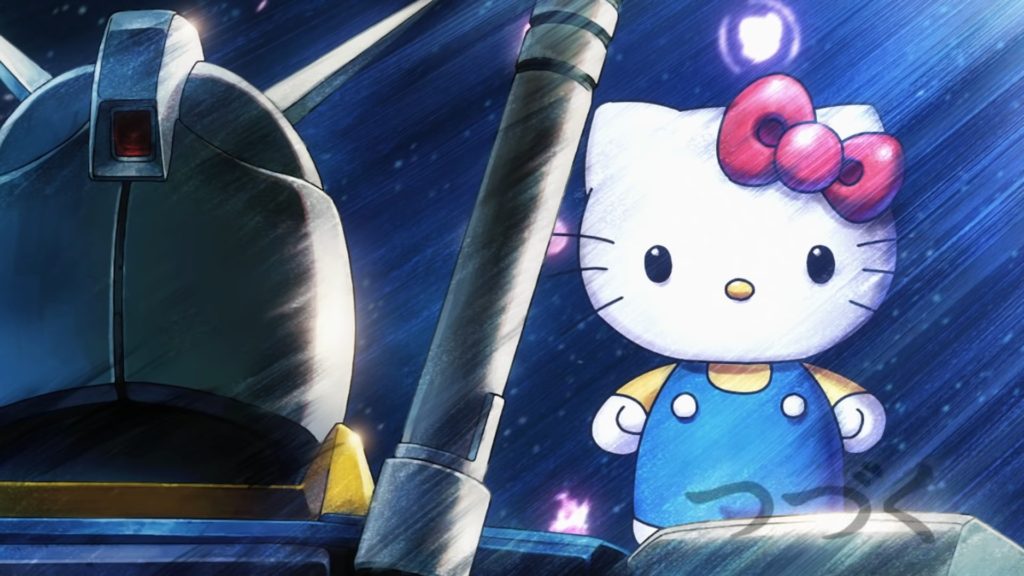 Last week saw the most mental combination of 2018 (so far) grace the internet, that of Gundam vs Hello Kitty, who are facing off in a popularity contest for the new age. And while the image of a giant Hello Kitty engaging an RX-78-2 Gundam in battle was ample material enough to pique my interest, the project also promised explanation on its story very soon. This weekend then saw the unveiling of the project’s first story PV, and it’s as wild as you might think. Check it out below:

The trailer sees Hello Kitty happily making preparations for a tea party before her television set suddenly comes alive and shows her footage of Mobile Suit Gundam protagonist Amuro Ray fighting Zeon forces before breaking down in tears at the horrors of war. Hello Kitty then takes it upon herself to try and cease the fighting, appearing in front of Amuro’s Mobile Suit in a giant mech suit of her own.

While I appreciate that this trailer is very much tongue-in-cheek, happily contrasting the innocent imagery of Sanrio’s iconic character with the dark, war-torn iconography of Gundam, I can’t help but think that it hasn’t exactly provided very sufficient story details. The issue of why Hello Kitty is fighting Amuro, or indeed the Gundam franchise as a whole still isn’t clear. After all, Hello Kitty seems to have taken the journey into space to stop the fighting – not to create new conflicts.

I’ll concede that I might be reading too much into what is meant to be a fairly nonsensical collaboration to celebrate both franchise’s anniversaries, however. The lack of story also certainly hasn’t stopped the Gundam vs Hello Kitty project from catching on big time, as the project quickly went viral on Japanese language social media sites and many pop culture news outlets, including our own.

That being said, there is still hope for the deep lore of the project yet. The end of the first PV declares that a second PV, titled “Chance Encounter,” will be available “soon.” Keep your eye on the project’s official website and Twitter account for more details in the meantime. You can also participate in the project by adding the official account as a friend on LINE.