Tengen Toppa Gurren Lagann Is Not Your Average Mecha Anime 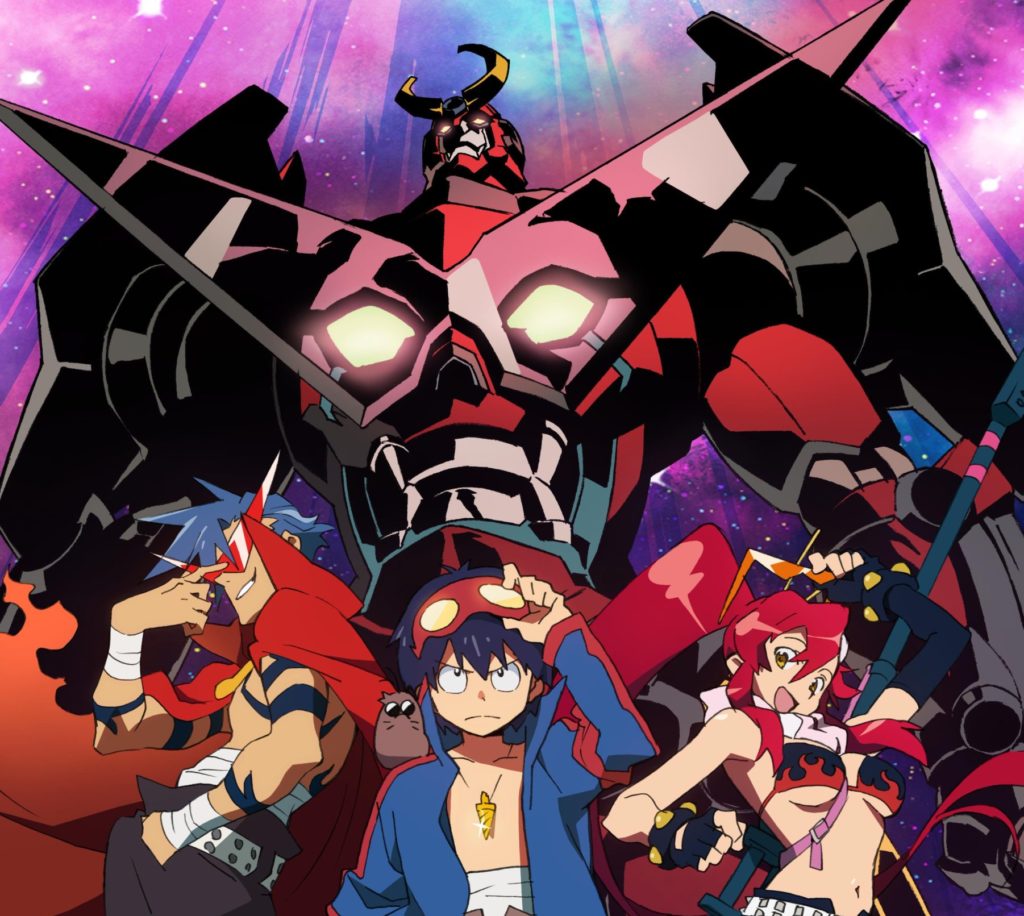 When fans talk classic mecha anime, there are a few that always make the cut: Evangelion, Gundam, and even a few super robots like Mazinger. Tengen Toppa Gurren Lagann is one these rare anime beasts that are both incredibly famous to regular anime fans and relatively unknown to newcomers. What is Gurren Lagann? Definitely NOT your average mecha anime.

Not many people would bat an eye to your average mecha show nowadays, but if you give the robots a bunch of grumpy faces, killer sunglasses, drills, and the ability to grow out of proportion when the power of belief is strong enough, then you’ve got everybody’s attention. The only question is… who could pull something like that off? Well… Studio Gainax!

The latter half of the 2000s were a formative period in modern anime. With the likes of Death Note, Code Geass, and The Melancholy of Haruhi Suzumiya making their mark of the medium, anime was seeing a resurgence that would eventually lead to the rise of the streaming era.

The legendary Studio Gainax had recently seen a lot of their top talents leave the studio, most notably when Hideaki Anno split off to form Studio Khara for the Evangelion Rebuilds. However, there was a new age of rising stars emerging from within Gainax.

Lead by Dead Leaves director Hiroyuki Imaishi, the group of Gainax-raised creators were about to make anime history. Assisted by mecha designer and masterful animator Yoh Yoshinari, character designer Atsushi Nishigori, and screenwriter Kazuki Nakashima, the team was about to channel all of their FLCL and Diebuster energy into a single word: Drills.

A Drill to Pierce the Heavens 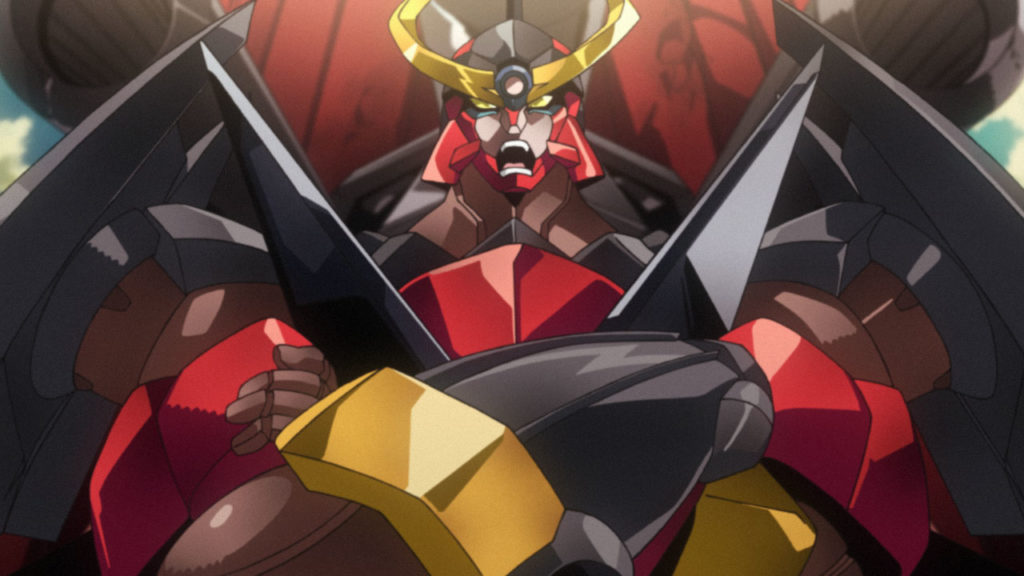 Gurren Laggan tells the time-tested Hero’s Journey story, and follows the hardships of a young boy known to all by the name Simon the Digger. Living in a small underground society consisting of a few remaining humans, all Simon knows how to do is spin his drill. In a society held to the whims of earthquakes and cave-ins, digging new homes is all he can do. This all changes one day when he finds a peculiar giant face underground: the mecha that would go on to be called Lagann.

With Simon’s last known family member dying to a cave-in, the only person who seems to have his back is the leader of the rat-pack Kamina. Defiant, audacious, and overwhelmingly ambitious to one day see the sky, Kamina takes the young Simon under his wing.

When a monstrous beast-man piloted ‘gunman’ one day burst through the ceiling of the cave town, it is Kamina that drives Simon to believe in the Kamina that believes in him. Together, with the help of the outsider Yoko who also comes bursting through the ceiling, they pilot their drill-based Lagann to victory.

The Gunman Known as Gurren Lagann

Not long after reaching the surface and befriending the Littner village, the gang find themselves ambushed by two more ‘gunman’, only to defeat them once again. Inspired by Simon’s Lagann, Kamina decides to hijack one of the ‘gunman’, dubbing his success a Gurren.

When later confronted by the formidable Viral, Kamina decides it’s time to combine because two heads are better than one, even on a robot. With their newly combined Gurren Lagann, the duo inspires the rebellion force Team Dai-Gurren and fights their way through hordes of beastmen, with the hopes of confronting their leader, the Spiral King. 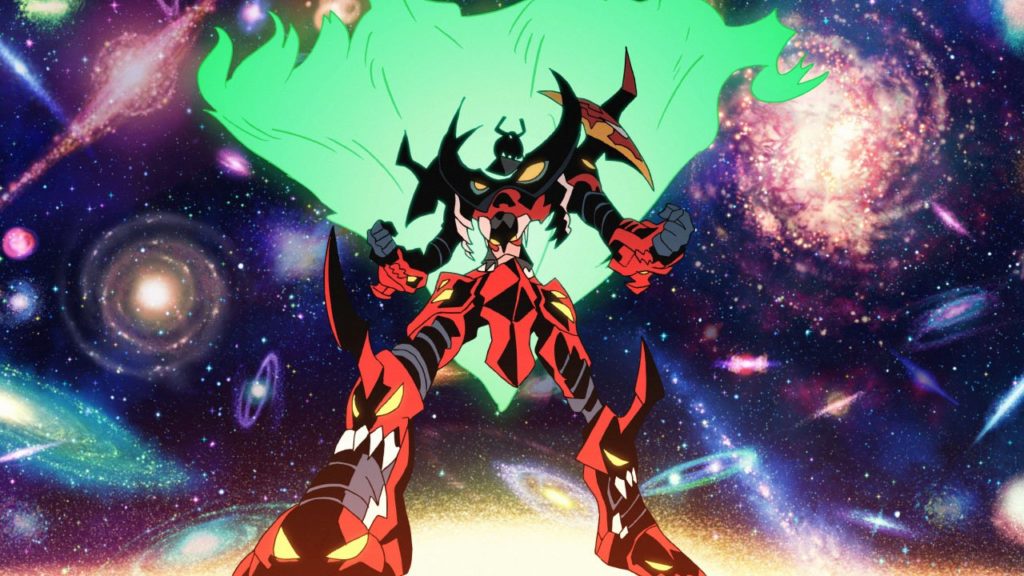 It’s no secret that the scope of Gurren Lagann’s mechas goes beyond oversized heads found in underground caves. Best explained through the notorious quote ‘we’re going to need a bigger drill’, the spiral power oozing Lagann bumps up the scale with every fight.

With a seemingly haphazard disregard for power creep, Tengen Toppa Gurren Lagann is able to leverage the absurdity of growing continuously bigger as a storytelling mechanism to great success. Besides, anyone who paid attention to the opening scene would have a good idea of how far they were about to go.

Things That Come in Twos

An aspect that catches a lot of viewers off guard about Gurren Lagann is its dual arc structure. With the story originally following the team Dai-Gurren as they face off against the oppressive Spiral King, a notable time skip eventually shifted their focus to the far more ominous Anti-Spiral. With the seemingly evil motives of the Spiral King later being painted as utilitarian, this style of a narrative shift has been used by every Hiroyuki Imashi and Kazuki Nakashima collaboration since then.

In every mecha anime, the robots do very little without the pilots. This is especially true for Gurren Lagann, where each gunman is an extension of each character’s personality. With every highly recognizable mech comes an equally recognizable pilot.

Here are some of the standouts. 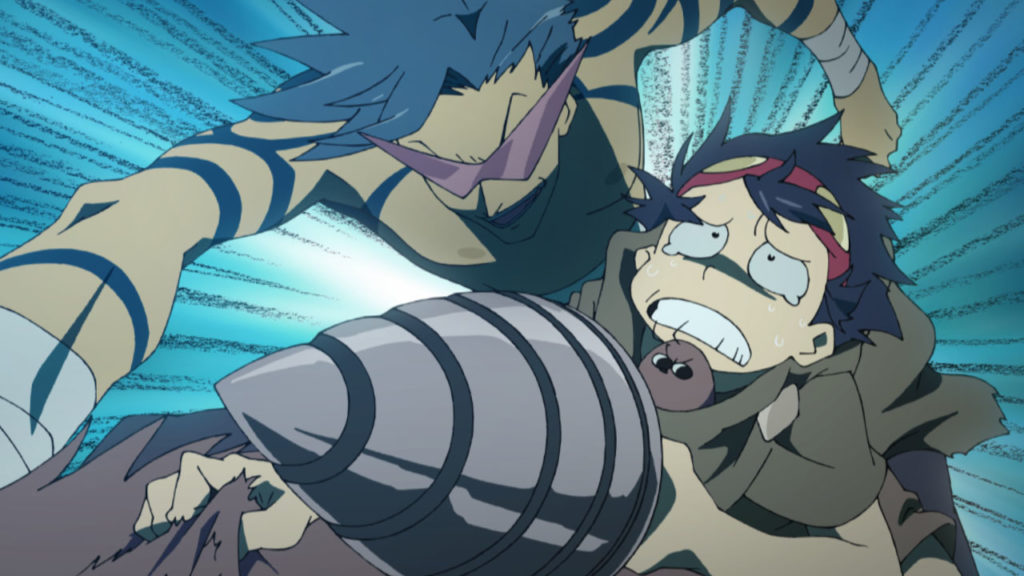 Kamina starts off as the star of the show. A young man who showed no regard for the rules set by any authorities or nature. Baring the role of Simon’s older brother figure (or Aniki), Kamina paves the way for his brother-in-arms to grow into an independent person with his own set of ambitions and the power to realize them.

As the rallying leader of team Dai-Gurren and copilot of Gurren Lagann, Kamina plays a core role in the advancement of the rebelling underdogs against the Spiral King. 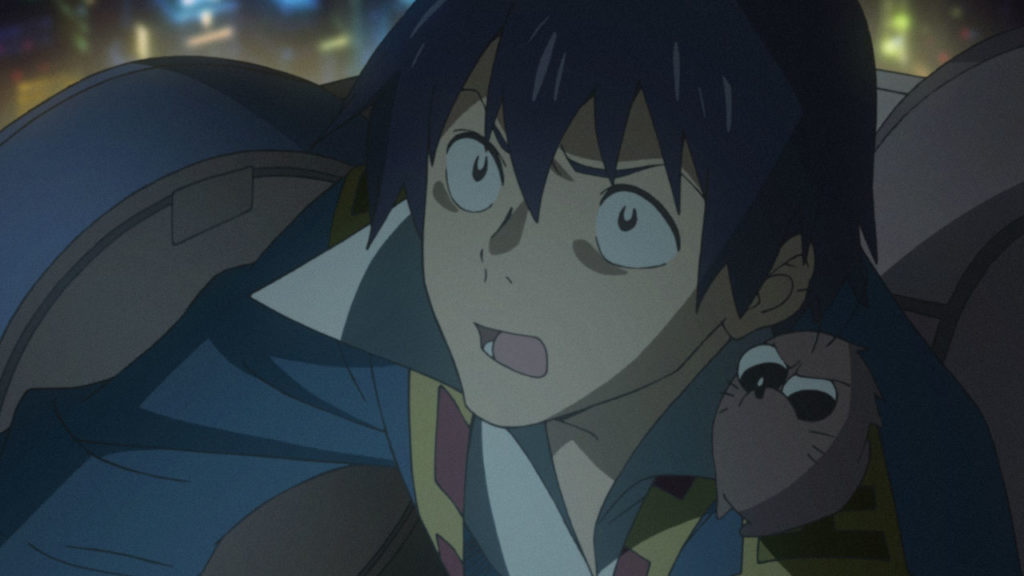 If Tengen Toppa Gurren Lagann is a Hero’s Journey, then Simon is our hero. Playing a key component in the fight against the beastmen, Simon also grapples with his own autonomy. Raised to dig holes for the underground village without consequence, Simon has to come to terms about his actions changing what happens around him.

Will Simon conquer himself in order to turn the tide in the battle against the Spiral King? That is for you to find out. 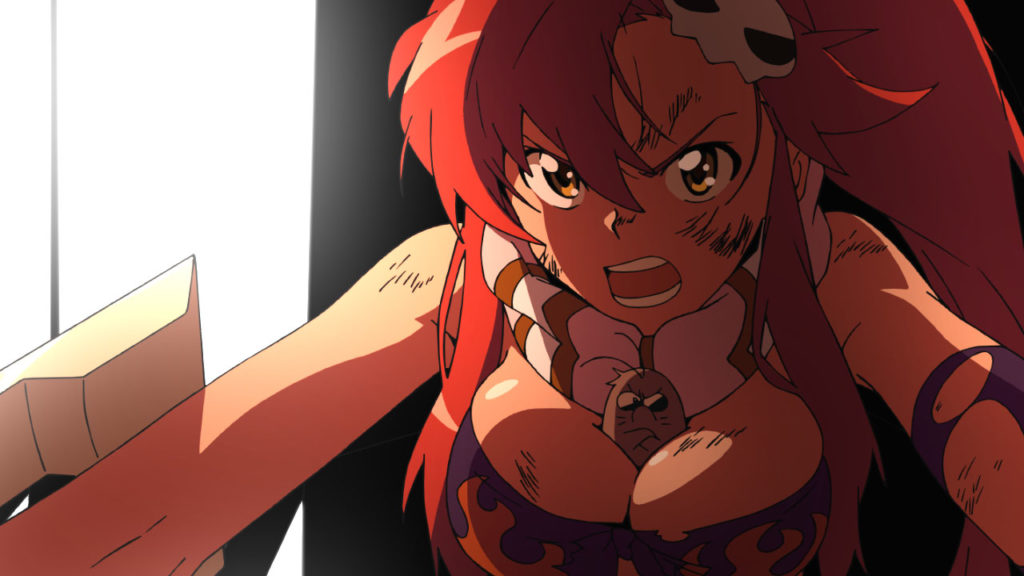 Hailing from the nearby Littner village, Yoko is the first outsider that Kamina and Simon encounter on their mission. Apart from being the poster girl of Tengen Toppa Gurren Lagann, Yoko is a skilled and experienced fighter who prefers to provide support from the sidelines, usually with her sniper rifle. By lending her combat prowess to the newcomers Kamina and Simon, their teamwork leads to the eventual formation of Team Dai-Gurren. 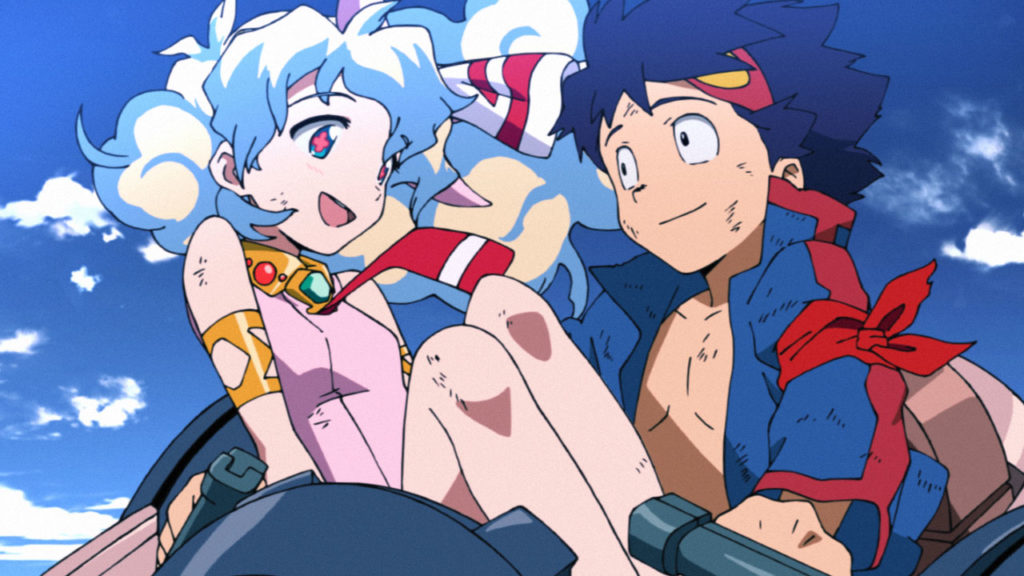 One of many discarded children of the spiral king, Nia wishes to find friendship and forge meaningful connections with the members of Team Dai-Gurren. At the side of Simon at most times, Nia to be able to move past her reputation as a princess that plagues the community around her.

Starting off as a black siblings counterpart to what Kamina is for team Dai-Gurren, Kittan is an equally hotheaded guy with a lot to prove. That’s not to say they’re the same, while they are definitely both ambitious Kittan’s focus is really supporting everyone around him while Kamina is always aiming up. Eventually hijacking a Gunman of his own, the aptly named ‘King Kittan’ is probably the most memorable in the series outside of Gurren Lagann itself.

As the Spiral King’s go-to hitman, Viral starts off the series as the ideal beastman. A ruthless, vicious, shark-tiger hybrid killing machine, Viral sets his sight on taking down Kamina and his Gurren Lagann. Due to Kamina and Simon’s antics, Viral finds himself struggling to accomplish a seemingly easy task and on the verge of losing his pride.

At the helm of the beastmen hordes sits the Spiral King Lordgenome on his throne in Teppelin. With four generals, Viral, and countless henchmen at his disposal, the Spiral King seeks to rid the surface world of all human life.

The ominous collective known as the Anti Spiral wishes to suppress all traces of spiral power they can find. Acting in fear of a so-called reality ending spiral nemesis, these cold hard logic beings will stop at nothing to maintain order.

Should you watch the Gurren Lagann movies or TV show?

Many viewers find themselves wondering whether to watch the 2007 TV Series of Gurren Lagann or go for the recap movies, Tengen Toppa Gurren Lagann: Childhood’s End and The Lights in the Sky Are Stars, instead.

The films suffer from having to cut a sizable portion of content in order to fit a shorter run time. That being said, they are a treasure trove of masterful animation and lay home to some of the most beautiful scenes in the series.

In fact, many of the intense clips you see circulating the web are likely taken from the movie over the TV series. Many fans would also agree that the recap films give the story a better closure. Given the masterful pacing of the original series, most fans are in agreement that the TV version is the way to go, at least to start off with. You can always come back for the films if after you’ve already fallen in love with the series.

Promare: 5 Things You Need To Know