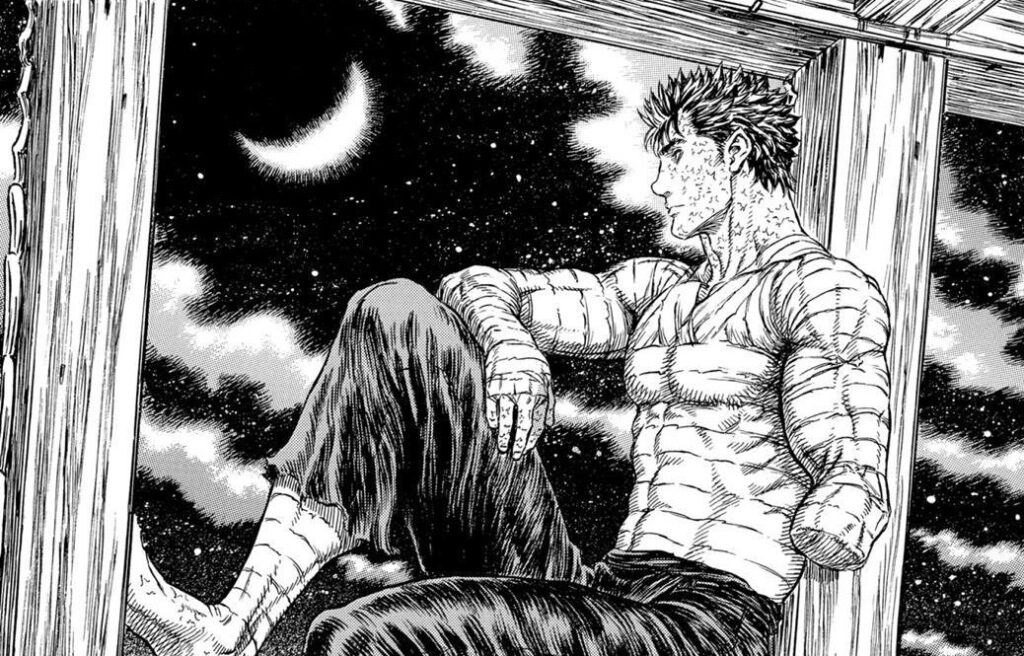 Throughout multiple years of hiatuses and one notoriously slow-paced arc, there was always the nagging thought at the back of many Berserk fans’ minds that Guts’ journey might never come to an end.

Now, our worst fears have come true: Kentaro Miura passed away on 6 May due to acute aortic dissection, leaving his life’s work unfinished. Contrary to popular belief, it’s unlikely that any of his assistants or employees over at Studio Gaga will be willing to pick up the mantle, nor would that be particularly desirable from the standpoint of a fan.

Contains major spoilers for Berserk up to chapter 363.

And that’s okay. While Miura definitely had a lot more planned for Berserk, and also other ambitions in the form of Duranki, Guts’ journey feels more or less complete. Berserk was never technically finished, but that doesn’t take away from what we got in the meantime or its legacy as a whole: it remains, and will remain, a masterpiece despite its unfinished status.

When we first meet Guts at the beginning of his journey during the Black Swordsman arc, he’s hardly much of a hero. His whole demeanor is one of death and destruction, evoking the image of a demon more than anything else. Above all, he is furious at something: eventually, we learn that this is a member of the mysterious ‘Godhand,’ known as Griffith.

In the Golden Age arc, we go back in time to explore Guts’ relationship with Griffith and how things ended up the way they are in the present. To cut a long story short, Griffith sacrifices all of his most precious comrades in the Band of the Falcon, a mercenary group founded by him, to achieve his dream: obtaining a kingdom of his own. 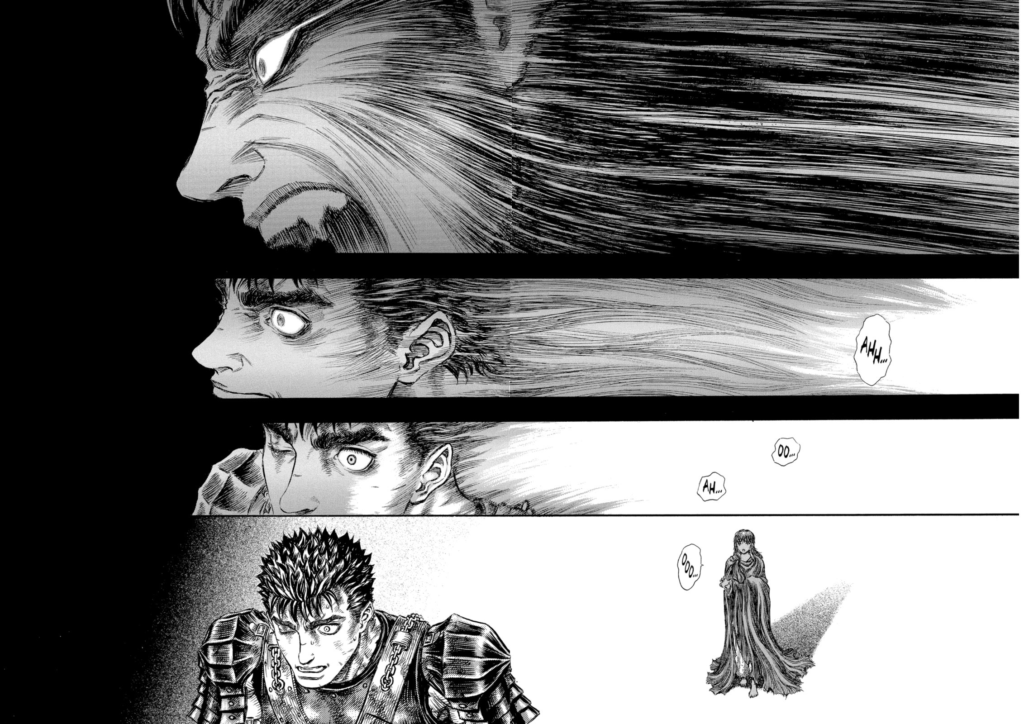 This conditions in Guts a strong feeling of resentment and a desire for revenge, which is re-explored in the Conviction arc. Here we also begin to see the other things that Guts holds dear: namely, Casca, who lost her memory after the Eclipse, a rare event in the world of Berserk, and wanders into the chaos surrounding the reincarnation of Griffith into physical form. The question is therefore posed: what does Guts want more, Casca’s safety or revenge on Griffith?

In the Millennium Falcon arc, several new characters join Guts’ journey: these are Isidro, Farnese, Serpico, and Schierke, joining Casca and Puck. At first, Guts isn’t too pleased with these people coming on board (he’s done perfectly fine by himself so far, after all) but he eventually learns to accept their presence and even appreciate the positive things that comrades can bring.

There’s a particularly emblematic scene representing this point in Guts’ journey towards the end of the Holy Evil War chapter and the beginning of the Falconia chapter: Looking at how happy Casca is, playing in the sea and surrounded by the likes of Isidro and Farnese, Guts remarks, ‘I thought, never again. Never again could I watch the sun set and be this calm. Never again could I sleep the night through.’

All this time, he’s been struggling against fate alone. But not now. 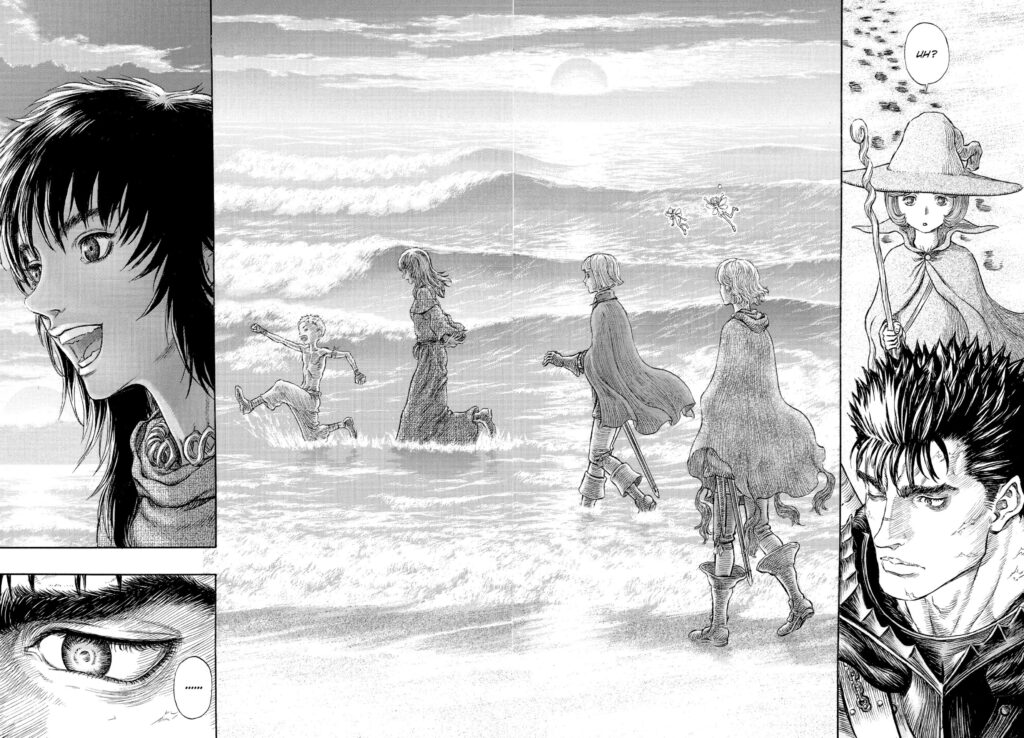 Following on from this, Guts’ journey begins to move away from the motivation of exacting revenge on Griffith and towards restoring Casca to her former self. So removed is Guts from Griffith after this point, that many of the most important parts of the Falconia chapter happen without his direct involvement. He doesn’t even know about the Great Roar of the World until he arrives in Elfheim.

This begs the question: what happens after restoring Casca? Is revenge still on the cards? Frustratingly, this is the note that the final Fantasia arc and Berserk as a whole leaves off on, with everything suspended in mid-air. What will probably end up being the final installment of the series, chapter 363, even sees Guts seemingly bored, swinging his sword around and waiting for something to happen. The Moonlight Child then appears, but it’s unlikely that we’ll ever know what he had to say.

Still, does this even matter? I certainly wanted to see what Miura had in store for us, and just how Guts and Casca would repair their relationship. As it stands, though, the main character’s journey makes a lot of sense: he realized that revenge wasn’t everything, and that simply cutting down whatever is in your way won’t make things the way they once were. Instead, what’s needed is to make new connections, have new experiences, and ultimately place your faith and trust in others.

Like many other readers, I have drawn so much strength from Berserk and the messages that Kentaro Miura delivered in the series throughout. Perhaps my favorite comes during the Lost Children arc, when Guts tells Jill that ‘there’s no paradise for you to escape to.’ Life is tough, but that doesn’t necessarily mean that we have to suffer through it alone.

In loving memory of Kentaro Miura. Thank you for everything.

You can read Berserk via Dark Horse.