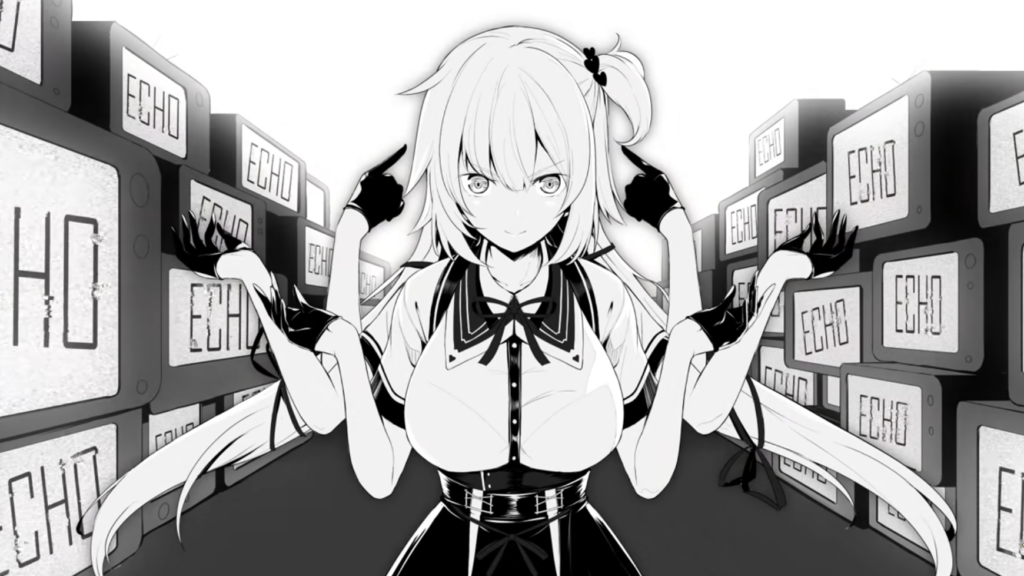 Towards the beginning of this year, fans of the Hololive virtual YouTuber Akai Haato and the subculture alike found themselves watching something very unusual.

In a stream entitled ‘#FREEHAACHAMA,’ Haato attempts to sing karaoke songs, but is interrupted several times by an antagonistic force known only as ‘Haachama.’ This culminates in a genuinely disturbing segment towards the end where Haachama appears to break into Haato’s apartment, declares that there will be ‘no more FreeHaato,’ and cuts off her head.

Another disturbing aspect is the choice to use the stock Discord call sound, making it seem as though Haato is receiving a call from Haachama: almost everyone uses Discord, so you can’t help but think that you’re getting called for a second. The result is a 58-minute livestream that both terrifies and enthralls the viewer, making for an incredibly engaging experience. 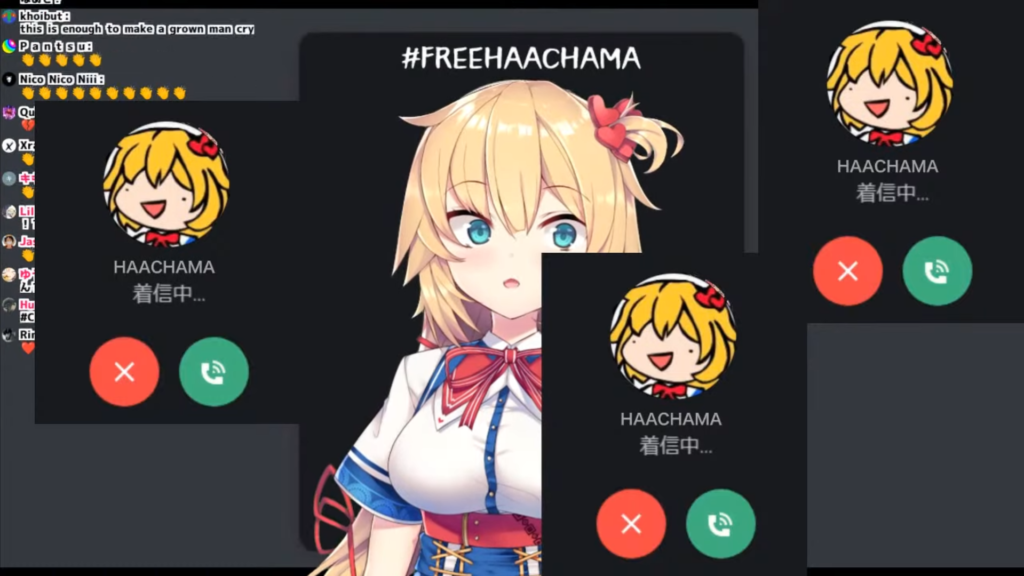 Such is just one example of Akai Haato/Haachama’s genius as a storyteller. But how did we get here? How does a member of the first generation of talent belonging to an ‘idol agency’ end up making content like this? And why is it important? Answering those questions necessitates a bit of a journey, going all the way back to the entertainer’s debut under the name Akai Haato. 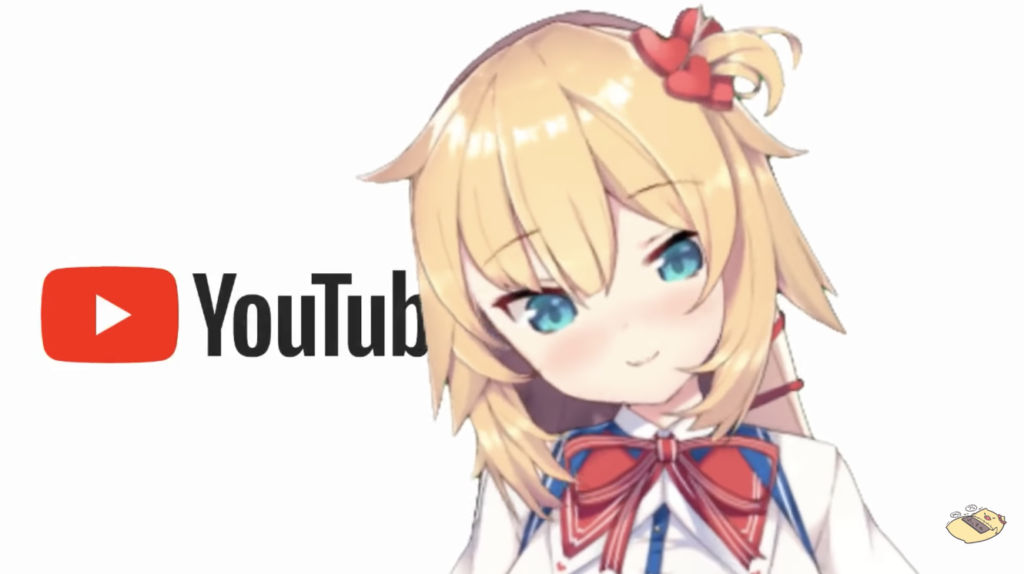 Looking back at Akai Haato’s debut stream on 2 June 2018 now is a strange experience. There’s absolutely nothing to suggest that she might go off the rails in the future: her demeanor is remarkably more measured and calm. Her bio on the official Hololive website describes her as a ‘cheeky kouhai,’ and this largely sums up her early personality: fun and endearing, but not exactly normal.

Much of Akai Haato’s early activity consisted of playing games like her contemporaries, but she deliberately tried to do something different in this regard by playing ‘silly games.’ Her second stream after her debut on 6 June 2018 was her playing QWOP, that ultra realistic running simulator. Getting Over It was another early favorite by the same developer, as well as Shobon no Action. Here, we can see the very beginnings of her desire to be creative.

This is strengthened by the fact that it wasn’t just gaming that made up Akai Haato’s early content. Also present at this time were a series of unique endeavors, such as ‘Asaraji’ or ‘Morning Radio’: an early morning stream much like Kiryu Coco’s later segment ‘Asacoco’, composed of three parts. One was designed to make you laugh, one told you the weather forecast, while another presented a ‘lucky item’ of the day. The stream was meant to cheer viewers up to face the day ahead, but the weather forecast segment was particularly inventive.

What’s difficult to pin down is when exactly it became clear that Akai Haato was living overseas. We know now that she went to high school in Australia from the time of her debut to the end of 2020, but that information was only explicitly stated in her ‘Introduction Like a Visual Novel’ published on 26 June 2018. There are videos before that which discuss her experiences living abroad, such as going to a prison-like school in the Philippines and getting hospitalized, yet Australia never appears to come into it. That might just be me overlooking something, however.

What’s more important is just how Akai Haato transformed into the ‘Haachama’ we know and love today. If she was so different upon her debut, how did she change? When did the new name come into it? And was there a specific turning point?

The Hololive wiki states that Akai Haato originally asked her viewers to call her Haachama, given that her previous nickname ‘Haato-sama’ felt too distant, but the videos given as the sources are no longer available. We don’t know when the name of her channel changed from ‘Akai Haato Ch.’ to ‘Haachama Ch.,’ either; at the very least, we do know for certain that the first stream with the name ‘Haachama’ in the title was from 13 March 2020, when she played Getting Over It with her feet.

Such gross-out content would eventually become a staple part of ‘Haachama’ over ‘Akai Haato,’ with ‘Haachama Cooking’ being a prime example. The idea of combining random ingredients, often leading to disgusting results, was a perfect encapsulation of that more unhinged personality as opposed to the calmer one. It also brought in a whole lot of views.

The first cooking video on Haachama’s channel wasn’t actually produced by Haachama: that would be an ASMR stream by Akai Haato on 29 March 2019, where she ate fondue. The first proper Haachama Cooking also wasn’t produced until 20 June 2020, over one year later. With this in mind, it’s not as if the content changed her personality: more likely is that the change in content reflected the change between the two personalities and the creator’s overall attitude.

So what changed that?

Before my research, I often encountered the assumption that this was due to lockdown, but I wasn’t sure if this was actually true. It could very well be a case of viewers projecting their own feelings onto the creator, I thought.

Nevertheless, in working through nearly two years of videos, I found a strong, irrefutable link between the travel ban enacted by Australia in June 2020 and her more unhinged content. Particularly after the stream on 20 June 2020 explaining the situation, the kind of content that ‘Haachama’ would become famous for over Akai Haato was more systematically produced. There’s even hints of the later horror arc format in there, using pre-recorded footage within the livestream. 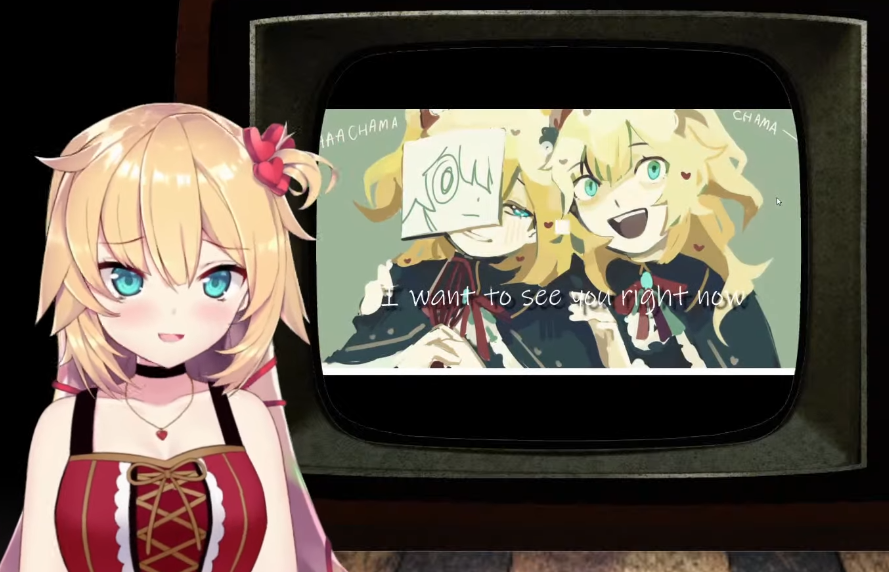 The difference isn’t clear cut, but it’s hard to deny the trend of causation. For all intents and purposes, Akai Haato was dead. Haachama was now in control.

What’s more, the idea that there were two sides to the creator’s personality was emphasized even more strongly during this summer period than any other. Among the numerous cooking videos, shitposts, and streams where Haachama would review her viewers’ otaku rooms, Akai Haato stood alone, putting on calmer karaoke streams under the title ‘無心’ (innocence). A long period of lore drought followed this, but the seeds were already planted for future developments.

On 21 January 2021, the horror arc proper started in a stream entitled ‘虚無いはあと (Heartless Haato).’ I was lucky enough to watch this stream as it unfolded live, wondering what the hell was going on the entire time. It isn’t actually a scary video per se, nor is it as stringently related to horror as the two ‘horror video’ contests held on 29 August 2020 and 10 December 2020, but it does lay bare the conflict between Haachama and Akai Haato for all to see.

It must be said that it doesn’t do so in a straightforward manner. Aping the abstract stylings of the end of the original Neon Genesis Evangelion more than anything else, it requires several watches. Nevertheless, when properly understood, it beautifully flips the last nine months of content on their head: the calm, singing Haato is replaced with the insane, singing Haachama, and Haato’s fruitless endeavor of trying to redraw her own deformed face is a perfect encapsulation of the fact that she has now lost her sense of identity. At several points, someone writes on the screen ‘Help me.’

This leads into the ‘#FREEHACHAMA’ video mentioned at the start, but it’s not like this was an immediate transition. Coming between that and the previous ‘Heartless Haato’ video was a Minecraft stream on 2 February 2021 where the creator swapped between her two different models, symbolizing the shift in personalities. This laid the basis for the horror arc later on, which unfolded largely between the months of February and March. 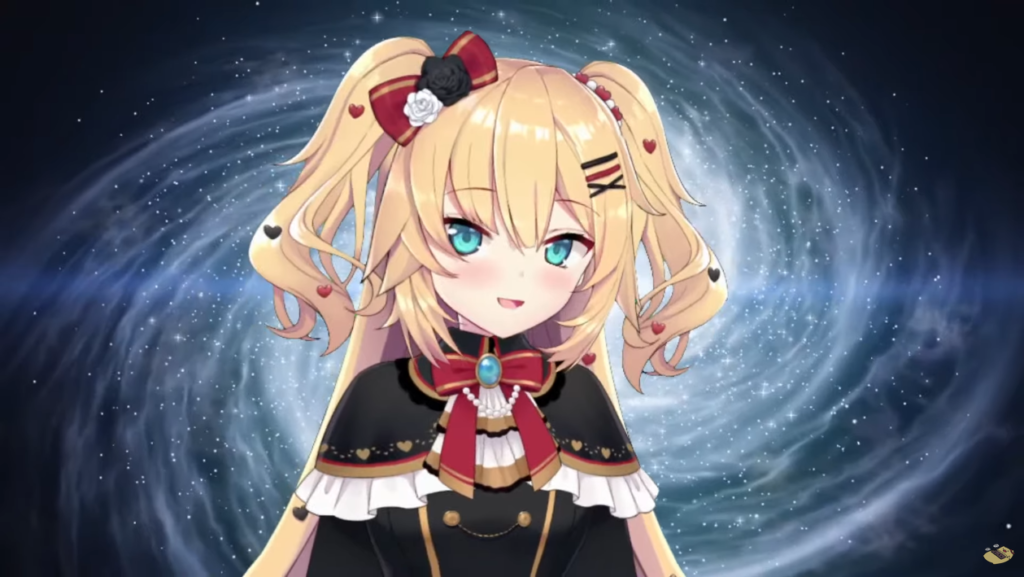 Souring the content somewhat is the fact that this arc didn’t come to an end in a smooth manner. While all the videos are back up now, they were deleted for a good while as Haachama said that she wasn’t able to end the story properly due to mysterious ‘new rules.’

Upon her return on 30 March 2021, it became clear that this was actually more due to her own shortcomings as a creator: she said that she wanted to try to make her own movie to fulfill her dreams of becoming a voice actor, but this turned out to be harder than she first thought. She was also working right up until the last minute in a very stressful manner, so she needed a break. What’s more, she is currently on another hiatus as of the time of writing, citing mental health issues in her tweet.

Does this mean that the horror storyline wasn’t a success? No, absolutely not, because I’d argue that in just one month, Akai Haato/Haachama was able to do more to innovate and push forward the virtual YouTuber industry than anyone had ever done before, paving the way for future creators and imitators alike.

To take the format first, what the creator did with the medium of livestream and her virtual avatar for the horror arc was, quite simply, genius. Given that she only ever existed as a 2D image, it wasn’t that much of a departure to represent her existential crisis through a bad drawing, and it was much easier to swap between two different costumes. The way that she engaged the viewer with both recorded footage and live segments has also already been mentioned. Even the most stalwart of VTuber haters would probably have to admit that these livestreams are pretty effective in what they set out to do!

In terms of the content, the success of Akai Haato/Haachama’s horror arc shows that people are looking for more outlandish virtual creators. It’s no accident that her channel hit 1 million subscribers in February: this came right in the middle of the story, at the crest of her weirdness. Hololive claims to be an idol agency, but what an idol can and cannot do doesn’t need to be as strictly regulated these days. Hopefully, other creators learn these lessons in the future.

Finally, other creators in Hololive have already begun to take notice of Haachama’s success and started to replicate it. Fourth generation talent Kanata Amane recently did a series of connected videos with a horror twist, as well as a live ASMR stream posing as a yandere sister. Undoubtedly, we’ll see more of these imitators in the future, even outside of Akai Haato’s agency.

When will Akai Haato/Haachama return? I don’t know. Will she ever make anything as good as the horror arc again? Probably not, but that doesn’t even matter. Her legacy is infallible, and I’d argue that virtual YouTubing is now Akai Haato’s world… we’re just living in it.