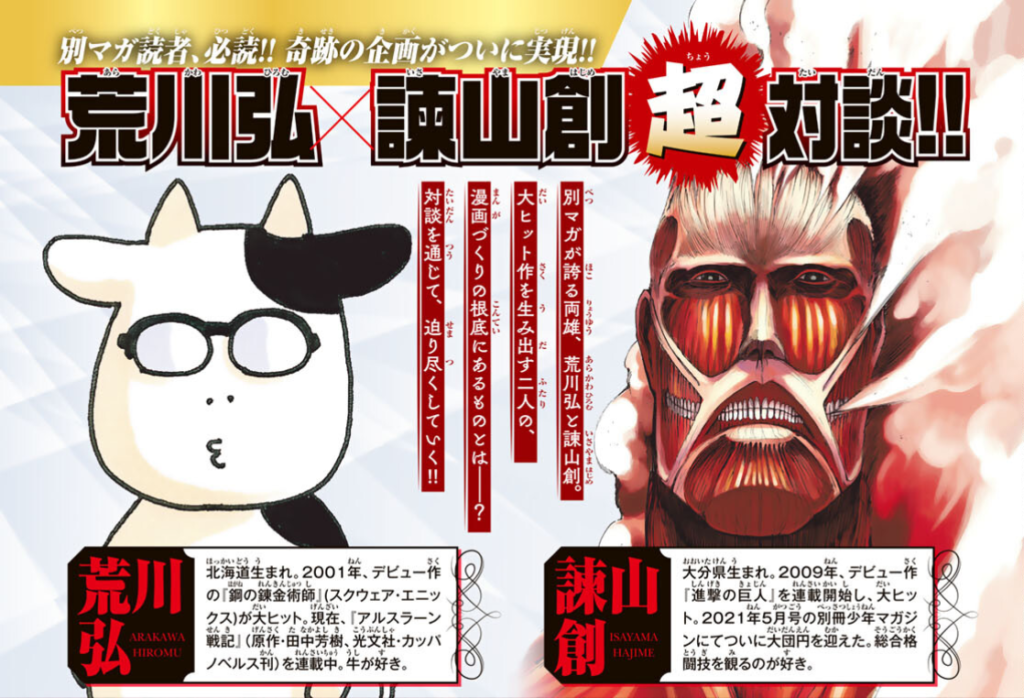 Hajime Isayama and Hiromu Arakawa recently sat down for an interview in the July issue of Bessatsu Shonen Magazine, making for a most fascinating conversation.

With any luck, these two creators require no introduction. They arguably both defined the respective decades in which they debuted, although there is a fair bit of overlap between the rise of Attack on Titan and the zenith of Fullmetal Alchemist’s popularity. Hajime Isayama also recently just finished up his best-selling series in Bessatsu after twelve years, while Arakawa is still hard at work adapting Yoshiki Tanaka’s The Heroic Legend of Arslan novels into manga form.

Bessatsu kicked off the interview by asking Hajime Isayama and Hiromu Arakawa what they thought when they read each other’s manga for the first time. Arakawa immediately brought up Attack on Titan’s iconic first scene with the Colossal Titan, remembering that she thought to herself, ‘something incredible has started here’ at the time. Isayama was already a fan of Fullmetal Alchemist, so he was naturally intrigued when he learnt that Arakawa would be tackling military history for The Heroic Legend of Arslan. 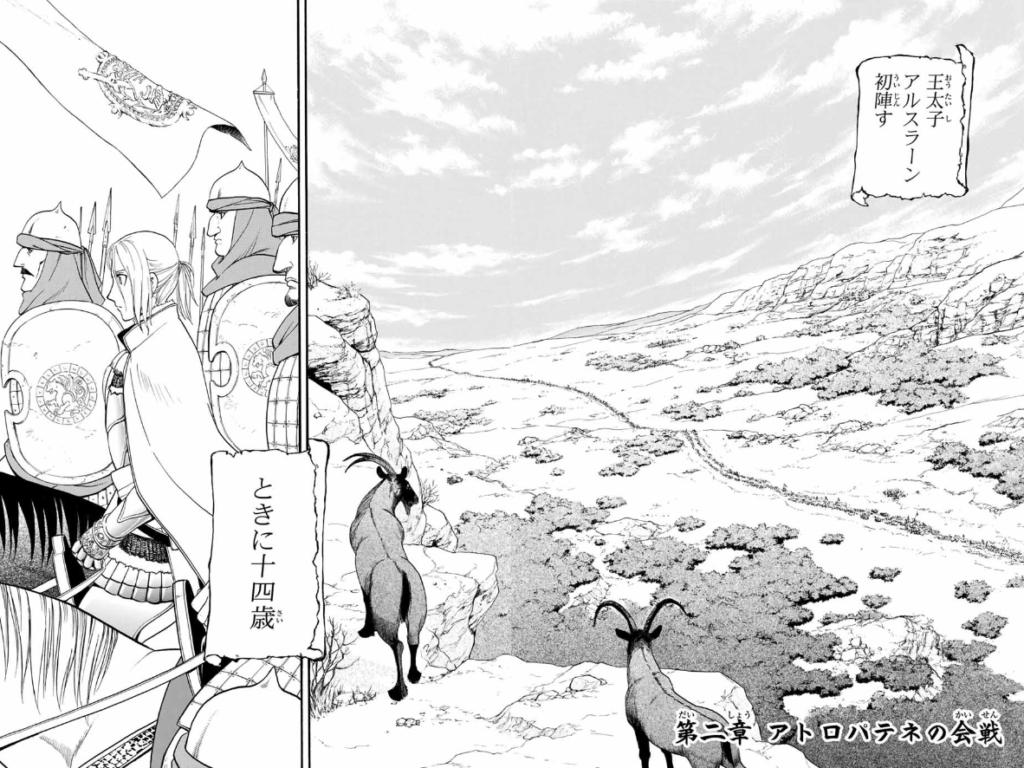 It was actually because of The Heroic Legend of Arslan that Isayama started to take an interest in ancient Persian history, even going as far as to do his own research. Yet, the more he read into it, the more he realized just how faithful Arslan’s setting was to real-life history. This naturally led into the next question: how does Arakawa gather reference materials for her manga? She admitted in the interview that it was mainly a question of reading a lot of books, since most things from ancient Persia have been lost to the annals of time.

When asked by Hiromu Arakawa, Hajime Isayama said in this interview that he doesn’t really have a similar research process. That being said, he was influenced by many different works for Attack on Titan: the 3D Maneuver Gear was apparently inspired by a weapon from Mega Man Legends or Mega Man 64 (called Rockman Dash in Japan), the novel Clouds Above the Hill by Shiba Ryotaro gave him the idea of doing something in a 19th century-style setting, The Village by M. Night Shamalan was the inspiration behind the dynamic between Paradis and Marley, as well as lots more.

Probably the most interesting part of the interview was when Hiromu Arakawa and Hajime Isayama discussed how their own individual values and worldviews made their way into their works. Arakawa admitted that she values knowledge, hence why the scene where all the books in Pars are burned is one of Arslan’s most memorable moments. Isayama, meanwhile, reckons that his desire to ‘do something outrageous’ expressed itself vividly as Attack on Titan drew towards its conclusion.

This also led to the revelation that Isayama actually had a copy of Picasso’s Guernica hanging in his family house when he was young, which explains a lot.

Finally, Hiromu Arakawa and Hajime Isayama capped off this interview by talking about the difficulty of endings. Isayama remarked that he felt ‘empty’ now that his work was over after twelve years, while Arakawa said that she too agonized over how to successfully pull off Fullmetal Alchemist’s ending. In particular, she wasn’t sure how much punishment to pile on Colonel Mustang, who decided to take responsibility for the war crimes in Ishval at the end of the series.

One final point to mention is how Arakawa sees the process of creating manga. Apparently, she thinks of the storyboard as a character in and of itself, so turning it into a finished manuscript means taking on a ‘Godlike position’ and making it ‘move’ for the audience. This certainly is a unique way of doing things, but it does allow her to better understand fans and create without biases.

This interview between Hiromu Arakawa and Hajime Isayama was about as free-flowing as it was compact. Trying to put everything in here would’ve been a fool’s errand, while it was also sometimes hard to follow the logic of the conversation. Nevertheless, having these two creators sit down together truly was a momentous occasion, offering us several interesting glimpses into how they work.

You can read the full Hiromu Arakawa and Hajime Isayama interview in the July issue of Bessatsu Shonen Magazine.