God, with every fiber of my being, I love pink-bobbed Haman Karn! This Zeon baddie, introduced in Mobile Suit Zeta Gundam, and remaining heavily prominent throughout the underrated Mobile Suit Gundam ZZ, wins fans over time eternal with her cut-throat personality and subtle integrity.  Ramba Ral’s also a legendary fan favorite from the original series; so beloved that for the Gunpla based spin-off series Gundam Build Fighters they incorporated an alternate universe version of him and nobody else. To what should be the delight of Gundam old heads everywhere, both of these iconic characters now have separate cutesy and sitcomesque manga spin-offs running in Monthly Gundam Ace.

Since Haman Karn is the particular favorite of this humble article’s writer, we’ll arbitrarily start with her manga. Arasa-OL Haman-Sama, penned by Sakazu Iwasaki, images what life would be like for the ferocious Zeon commander if she was instead an office lady. ol is a bit of Japanese English meaning office lady, and unfortunately, that’s not an outdated term yet in Japan. One would imagine that if Haman had to work in an office, she’d devour her coworkers and quickly climb the corporate ladder before co-opting the position of CEO for herself. 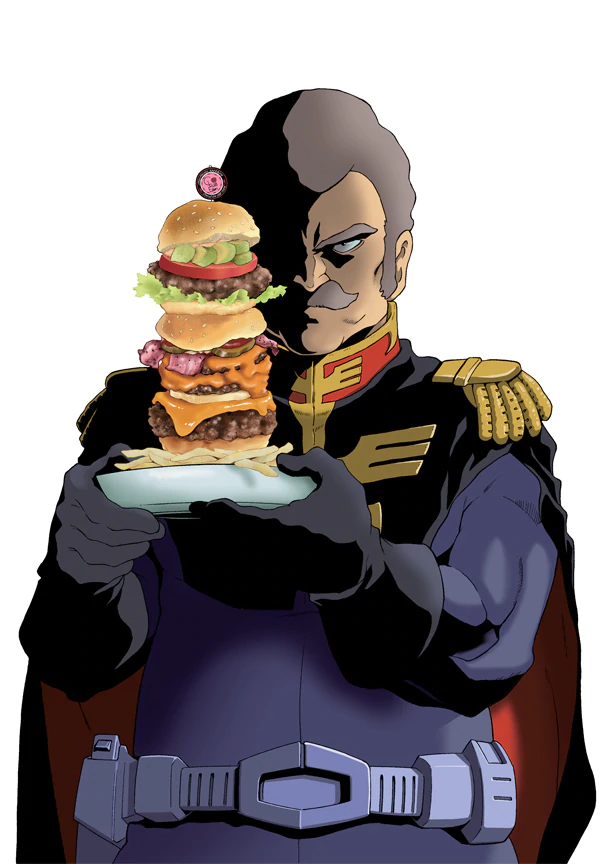 Look at Ramba Ral confidently hold that hamburger with the same seriousness the commander would undertake any of his missions. I remember once, a particular oldhead told me that Gundam fans were moe for old Ramba, and looking at the illustration above, I get it; Just wanna squeeze this man. I also want to read Kazuya Tani’s Ramba Ral’s Haitoku Gohan which roughly translates to Ramba Ral’s Immortal Rice/Meal. It is a gourmet food manga starring Ramba Ral working part time at a Club.

Between this and office lady Haman Karn, if you’re the type who can poke fun at what you love, you’re in for a treat.

The Haman Karn and Ramba Ral manga have both launched in the most recently Monthly Gundam Ace.