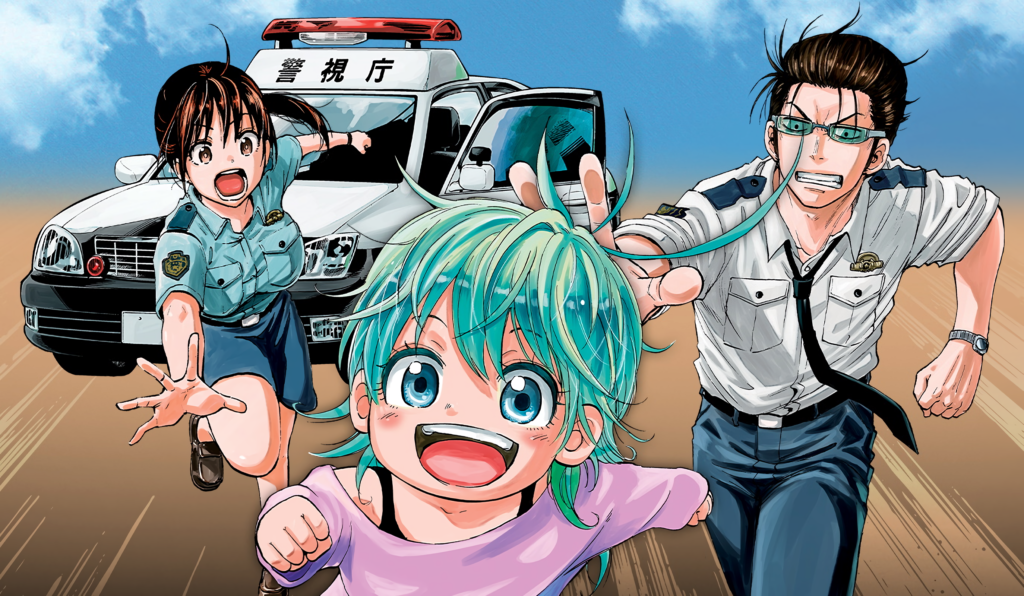 Hello there and welcome to Your Manga Week. Finding time to keep up with all the manga that releases on a weekly basis can be difficult, so I’m here to tell you what’s worth your time and what’s not. We’ll also be discussing the story and arc developments as they come. This week, we’re talking Hard-Boiled Cop and Dolphin chapter 1, Dr. STONE chapter 156, and Time Paradox Ghostwriter chapter 7.

The new series continue in Weekly Shonen Jump this week with Beelzebub author Ryuuhei Tamura making his return in the form of Hard-Boiled Cop and Dolphin. Incidentally, the last time Tamura was serialized in Jump was in 2017 with Hungry Marie, which only lasted for four volumes. Let’s hope that he has better luck this time around. In other news, Mission: Yozakura Family has announced its plans for its first anniversary, allowing fans to submit their ideas for new spies in the story. I’m not sure that what the series needs right now is more characters, but it is a neat way to engage with its readership. In any case, on with the manga.

So. Ryuuhei Tamura is back, bringing with him all of the hopes of repeating Beelzebub’s success from 2009 to 2014. But the world is a very different place now to how it was six years ago, and I fear that recent social and political movements make Hard-Boiled Cop and Dolphin appear to be in very poor taste. That is not to say that I believe that Ryuuhei Tamura is in favor of police brutality – that would be ridiculous – but there are still unfortunate connotations that make Hard-Boiled Cop and Dolphin chapter 1 quite a hard read in some places.

First of all, let us start with the premise. Self-proclaimed “hard-boiled” cop Boyle Samejima ends up getting sent to Okinawa after being too heavy-handed in his treatment of a hostage situation, where he presumably can’t do much harm. This reminded me of Hot Fuzz, if only tangentially, as Simon Pegg’s character also gets sent to the boonies after taking his job too seriously. 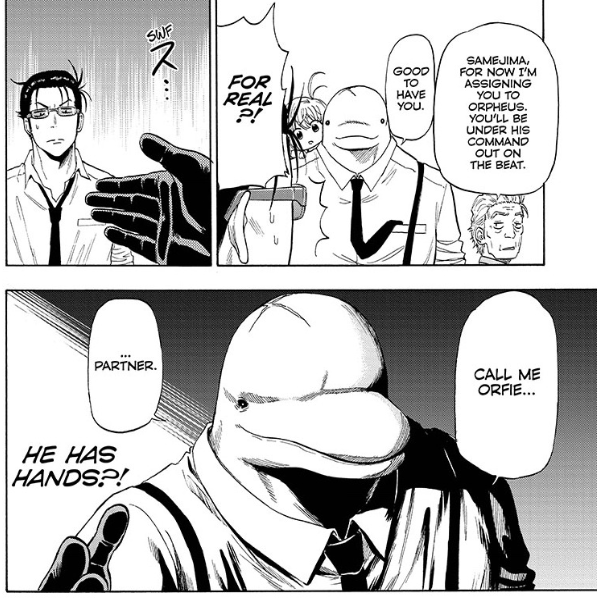 Yet, Ryuuhei Tamura puts its own twists on this tried-and-tested premise. Instead of simply following the same-old “fish out of water” formula, he also incorporates into it the mystery of ocean life. Hard-Boiled Cop and Dolphin chapter 1 opens with a meditation on the fact that while we know quite a lot about the kinds of animals that live above ground, we have yet to even scratch the surface of aquatic animals. This brings to mind the old adage that we know more about outer space than the contents of our own oceans – something which is undoubtedly true, and has always fascinated me ever since I was a child.

That being said, Tamura’s interpretation of this fact is not at all serious. Instead, he uses it to justify the inclusion of a humanoid dolphin as a character – Samejima’s partner, Orpheus – as well as to set up a mystery surrounding a girl who was “raised by dolphins” after being thrown away by a cult, named Choko.

What makes Hard-Boiled Cop and Dolphin chapter 1 entertaining, then, is not its premise but its characters. Samejima is definitely the highlight here, as he functions as a delightful parody of police fiction and the kind of image that the media portrays of police officers. Orpheus is also entertaining, if only because of how far he is willing to go to protect his “daughter,” Choko.

Nevertheless, these characters do not exist in isolation. Indeed, it is the way that Tamura uses them that makes the series feel quite out of touch with the current political climate. The main plot of Hard-Boiled Cop and Dolphin chapter 1 revolves around an incident with a bunch of rowdy YouTube vloggers, who have come to Okinawa and caused some ruckus. Samejima and Orpheus try to get one of them to show them his license, but he refuses because he doesn’t have one. Samejima then uses the threat of force to intimidate him to do so, which doesn’t exactly fly in the current climate of revisiting and reevaluating the use of police force.

I don’t want to get too political here, but more moments in Hard-Boiled Cop and Dolphin chapter 1 leave me with no choice. There is a particularly uncomfortable scene where Orpheus takes one of the vloggers’ phones, which immediately hits upon the issue of accountability and individual rights. The fact that the climax revolves around the use of firearms (albeit to shoot some tires and save an elderly lady) is just the icing on the politically tone-deaf cake. 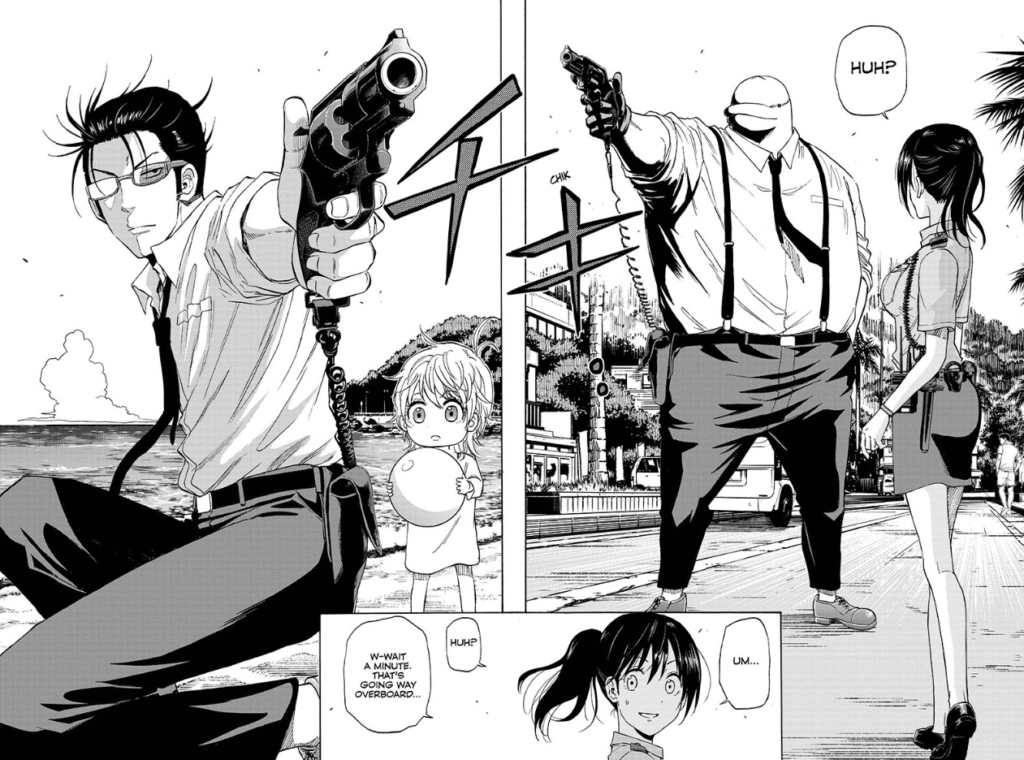 The issue of police brutality is not just an American issue. Just a few weeks ago, there was an incident surrounding the maltreatment of a Kurdish immigrant by Shibuya police that sparked a mass protest. In Kansai, thousands turned up for a Black Lives Matter demonstration – both Japanese people and foreigners alike. No country is entirely innocent, and everywhere the political mood has shifted.

In such an atmosphere, Hard-Boiled Cop and Dolphin chapter 1 feels very out of place. That is a shame, as there is quite a lot to like here – the fish out of water premise, the mysteries of the overall narrative, as well as Tamura’s art and character designs. But we do not read any piece of media entirely “neutral,” and we always bring to it our own moods and preconceived ideas. In this sense, I can’t see myself reading any more of Ryuuhei Tamura’s new series without a fair bit of discomfort.

Phew. Now that’s out of the way, we can move onto some more genuinely enjoyable stuff. The recent Dr. STONE arc has been moving slowly, carried along mostly by the momentum of prior revelations and the prospect of exploration and discovery, but this week’s chapter 156 feels like the first time that things have really started to move into place. More concretely, we learn a little more about the relationship between Senku and the new antagonist of this arc: Dr. Xeno.

Just as Senku declared at the end of last’s week chapter, Xeno was indeed the protagonist’s “science mentor” when he was a child. But Dr. STONE chapter 156 shows how exactly this came about. As it turns out, Xeno was the only one willing to respond to the emails that Senku sent to NASA back when he was experimenting with rockets as a kid. We always knew that the genius boy had an obsession with rocketry, but never that someone helped him to refine his work – suggesting that Xeno’s insertion was not always planned from the beginning. 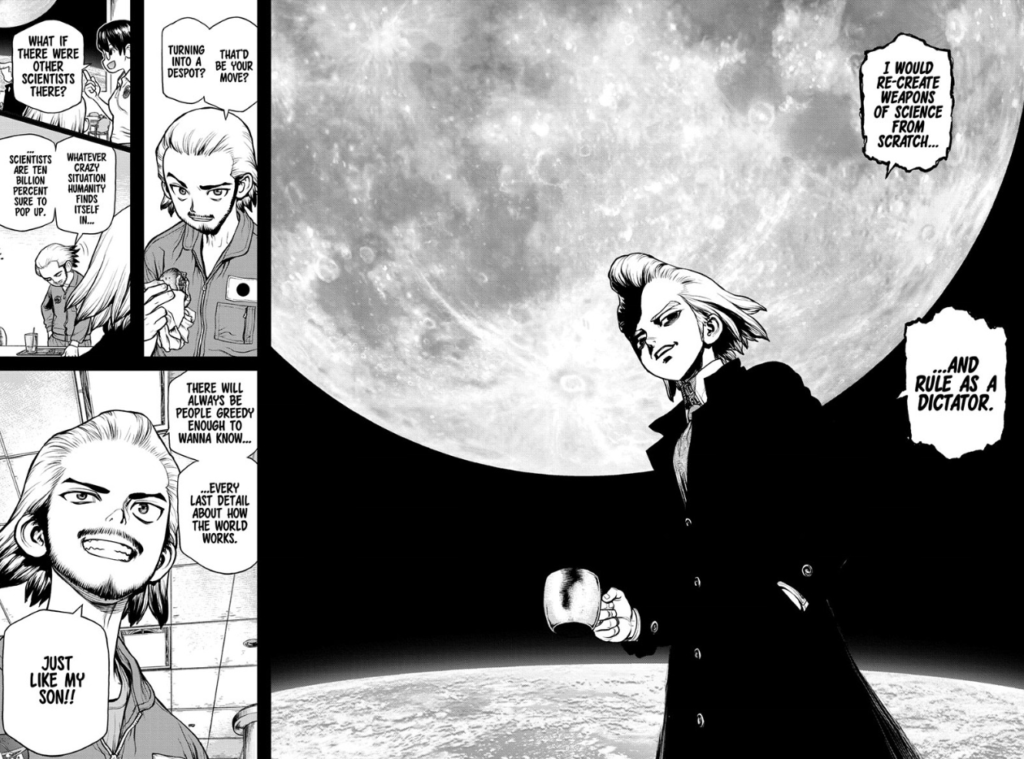 Nevertheless, series author Riichiro Inagaki makes it work. Given that Xeno was kind enough to respond to Senku’s emails back when he worked at NASA, the first question that comes to mind is: what happened? Why did Xeno become a villain when he clearly isn’t entirely evil? The answer, as it turns out, comes down to a question of philosophy: while Senku sees science as a vessel for knowledge, Xeno sees in it a vehicle for domination and control. Hence why he tried to get Senku to use him rocket experiments for evil, and why, given the opportunity, he has attempted to dominate the world through science and technology.

Not only does this present two different but equally interesting viewpoints on the potential of scientific discovery, this revelation in Dr. STONE chapter 156 also reintroduces something to the series that has been absent ever since the defeat of Tsukusa: ideological and philosophical conflict. If Senku and Tsukasa’s dichotomy was all about knowledge vs. power, then Senku and Xeno’s dichotomy is all about knowledge vs. domination – a little more specific, to be sure, but no less engaging and thought-provoking.

There isn’t much more to Dr. STONE chapter 156. In fact, quite a lot of the chapter is delivered without dialogue entirely, including the first meeting between the scientific penpals Senku and Xeno. But sometimes words aren’t needed, and the chapter is all the better for it – we now know what the deal is between our protagonist and antagonist, as well as the fundamental ideological and philosophical differences that underpin their differing points of views. I can’t wait to see how things develop from here on out.

Finally, we come to Time Paradox Ghostwriter chapter 7. Last week, we touched upon chapter 6 by saying that it was a turning point for the series; an opportunity for it to turn itself around and craft a compelling story beyond its bombastic premise. It makes me very happy to say, then, that author Tsunehiro Date has seemingly seized that opportunity with both hands, moving the series in a much more positive direction as a result.

Carrying on from last week’s cliffhanger, Sasaki decides to ignore the fact that an issue of Weekly Shonen Jump failed to turn up and continue drawing the next chapter on the basis of the issues that he already has in stock. Nevertheless, anxiety and uncertainty reign. Can Sasaki really hope to continue White Knight without the help of Itsuki Aino’s story from the future? His art is barely up to scratch, let alone his original storytelling.

Luckily, come the next week, an issue of Jump from the future does appear in his microwave. But it contains a shocking revelation. Opening the page to where Aino’s White Knight should be, Sasaki instead finds a full-page notice informing the readers that Aino has suddenly passed away: 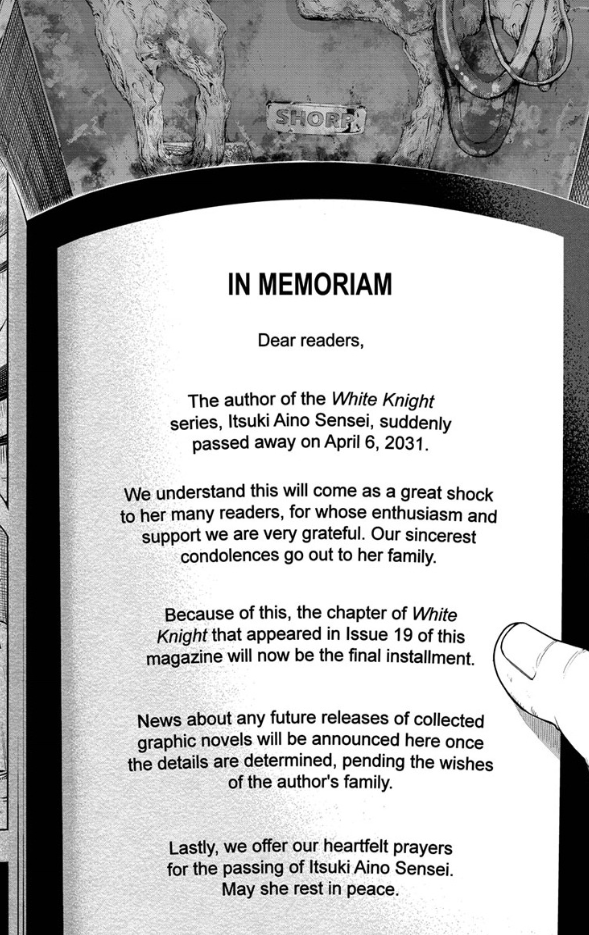 Almost instantly, this revelation in Time Paradox Ghostwriter chapter 7 changes everything. It reframes the narrative to be less about making Sasaki’s White Knight into a success in the present and more about the goal of preventing Aino’s death. This is later confirmed when mysterious writing subsequently appears on Sasaki’s fridge saying that it is only by continuing to write the story that her fate can be averted.

This development is very welcome as it addresses one of the series’ main flaws: an overreliance on narrative. For the most part, Date has put characters to one side to explore the implications of his fascinating premise, which hasn’t proven successful in recent weeks – he hasn’t been able to represent the method of making manga in an as entertaining manner as Bakuman. But no one wants Aino to die, which immediately gets the reader on board with Sasaki’s new, character-driven quest. Will he be able to avert her death? How will he cope with having to write his own, original stories? And why does she die in the first place? We’ll just have to keep reading to find out.