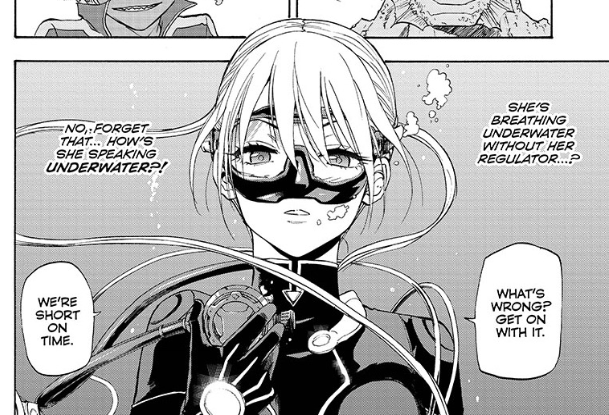 The beginning of a new week can only mean one thing: time for new Weekly Shonen Jump! This is where Jacob investigates the latest and greatest in the magazine, telling you what’s worth your time and what’s not. You can find coverage of other series under the tag Jump Time. Here’s Hard-Boiled Cop and Dolphin chapter 26.

Hard-Boiled Cop and Dolphin is currently in a transitional period. Beelzebub author Ryuuhei Tamura’s latest series started out with a bunch of episodic skits to get readers familiar with the characters and the story’s remote island setting. But now, playtime is over. Starting in chapter 24, Tamura brought in the big guns and introduced a bunch of characters that clearly foreshadowed the series’ more open turn towards battle manga: Hard-Boiled Cop and Dolphin chapter 26 is, in many ways, proof of concept of that.

Last week, Mobile Marine Investigations Unit captain Tome got isolated from Samejima and Orpheus and was forced to face down a fearsome merman opponent. The surprise came, however, when she took off her oxygen mask and boldly declared ‘Oh? I wouldn’t be so sure about that’ in response to her opponent’s taunt ‘No human stands a chance against mermen in the sea.’ This clearly set up for some sort of underwater fight, which Hard-Boiled Cop and Dolphin chapter 26 delivers on.

For the most part, it’s pretty good. The mere idea of hand-to-hand combat under the sea is pretty bonkers, so to see how Tamura makes such a concept work is fascinating to see. Tome has a bunch of techniques up her sleeve, themed around the concept of ‘Ocean Breeze Cardinals’ (as in she literally says this before unleashing them, just like a classic shonen manga) as well as a special suit that releases small amounts of air that allow her to move despite the resistance of water.

This is apparently an expansion of the ‘cavitation effect’ that is also used for ‘modern day torpedo technology,’ but I don’t believe for a second that this could work in reality. Still, it’s shonen manga, so what matters is that Tamura has at least attempted to anchor it to real-life concepts and technology; this will go a long way in allowing the user to suspend their disbelief, just like every other good power system out there.

Nevertheless, some questions do remain. Firstly, what are ‘Ocean Breeze Cardinals’ exactly, and where did Tome learn them? Undoubtedly, Samejima will undergo this training too if he wants to keep up with Hard-Boiled Cop and Dolphin’s growing power ceiling, so we might learn that then.

Secondly, how is Tome able to breath underwater? The term ‘agita breathing’ is mentioned, but your guess is as good as mine as to exactly what this is. Again, I have no doubt this will be explained in the course of the story, so I’m not actually that worried; rather, Hard-Boiled Cop and Dolphin chapter 26 leaves off as compelling proof that the series can become a battle manga, and quite an interesting one at that.

You can read Hard-Boiled Cop and Dolphin chapter 26 for free via VIZ Media.