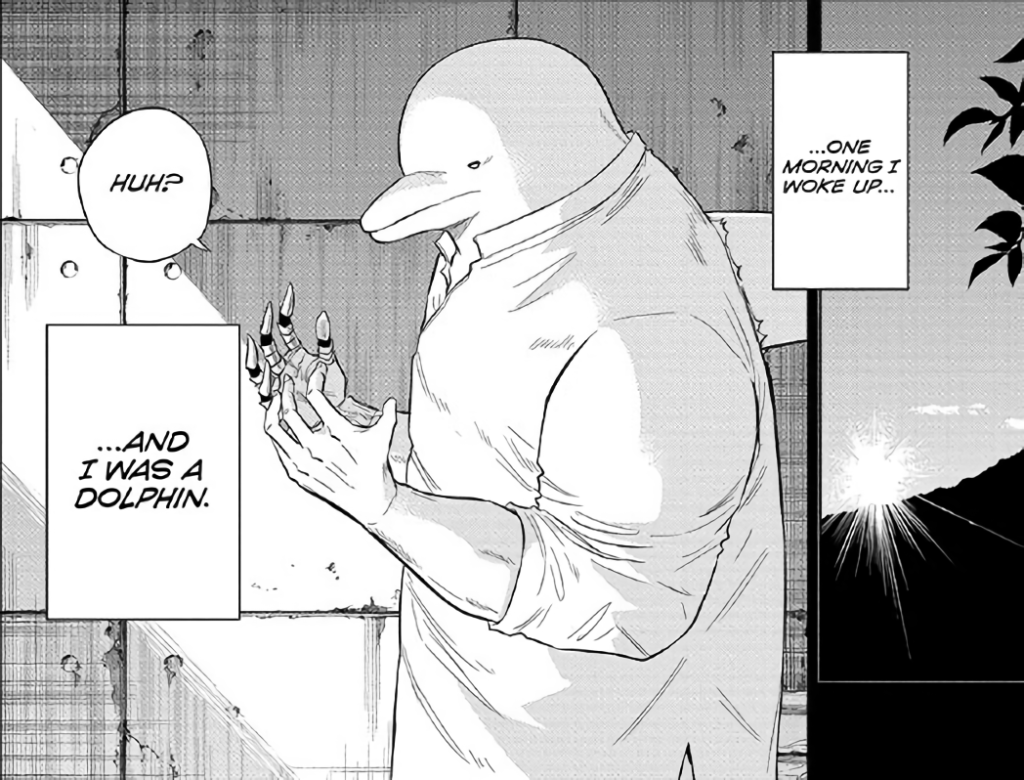 The beginning of a new week can only mean one thing: time for new Weekly Shonen Jump! This is where Jacob investigates the latest and greatest in the magazine, telling you what’s worth your time and what’s not. You can find coverage of other series under the tag Jump Time. Here’s Hard-Boiled Cop and Dolphin chapter 42.

Even though we’re just over a year in, Hard-Boiled Cop and Dolphin only has one question left to answer for the audience: how did Orpheus turn into a dolphin? Given that chapter 42 more or less explains all, I can’t help but feel like a conclusion is on the horizon.

So far, Hard-Boiled Cop and Dolphin’s latest arc has ballooned from a simple story about rescuing Yukari to being an exposé on Orpheus’ past, where Chako came from, and what his relationship with villain Murofushi actually is. As mentioned, the only question it has left to answer is how Orpheus became a dolphin, although it obviously had something to do with the ‘Poseidracon’ grafted onto the stump of his right arm.

Before that, Hard Boiled Cop and Dolphin chapter 42 starts off with a pretty terrifying scene detailing Chako’s ability to ‘talk’ to fish. At first, it seems as if Chako has some sort of magic power, but it is revealed by way of some pretty effective panel art that the fish had actually ‘evolved’ to the point where they could talk back. Massive props have to go to Ryuhei Tamura for coming up with this, because it’s actually quite disturbing. 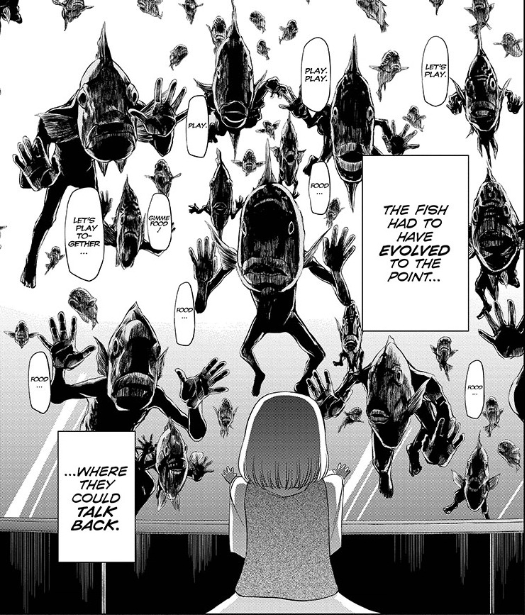 It’s at this point that Haebaru or Orpheus, as he’s now known, is dragged out of his cell and asked to use his right arm to ‘quell’ the fishes’ ‘explosive evolution.’ This apparently happened multiple times, to the point where Haebaru simply woke up one day as a dolphin.

Taken out of context, Hard Boiled Cop and Dolphin chapter 42’s long-awaited answer to a burning question can seem quite disappointing. Yet, it’s linked pretty well to Orpheus’ motivations and character development: he didn’t mind using the mysterious Poseidracon over and over, despite knowing that there might be consequences, because he wanted to protect Chako. Furthermore, he only takes on the name Orpheus at Chako’s request, since she was always trying to talk to the aquarium’s animated mascot. This was also foreshadowed back in chapter 37.

It’d be hard to deny that answering that question in chapter 42 doesn’t take the wind out of Hard Boiled Cop and Dolphin’s sails just a little bit, though. There’s hardly anything left for the reader to discover now, apart from maybe what is really lying at the bottom of the underwater temple. And considering that this flashback also takes place during a scene where Orpheus appears to die, I’m not sure if there’s much momentum left to carry the series forward at this stage. It might be dead in the water.

Oh well. It was good while it lasted.

You can read Hard-Boiled Cop and Dolphin chapter 42 for free via VIZ Media.